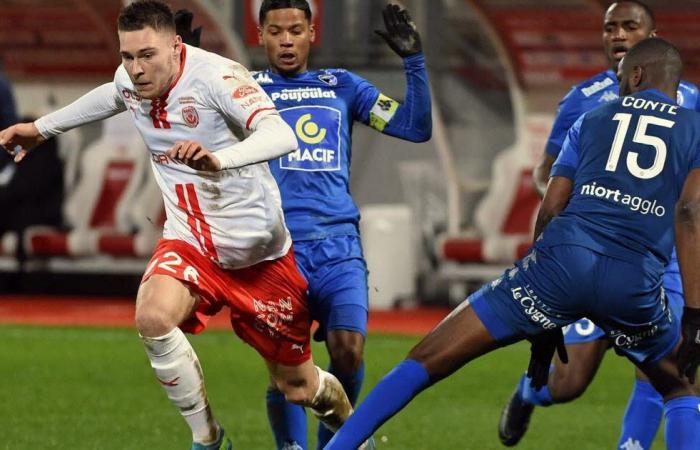 This ASNL has at least one merit, and not the least, its ability to come back when it is led. This is what saved him from a monumental disillusion this Saturday against Chamois Niortais, with the equalizer after a second period disputed at 11 against 10 without drawing any real benefits.

The evening therefore ended on a positive note for Nancy who continues her unbeaten streak (4 draws, 1 success) but that cannot make us forget all the negative things seen during the first half in particular. A poor first period, frankly. It is the end of January and the ASNL has still not managed to finish a scoreless game this season at Picot. This Saturday night, Ba took advantage of a defensive error, a classic, to open the scoring in the 12th. Ba lobed Valette after a missed technical move by Seka. ASNL could even have ended up two goals behind on a new attempt by Ba (21st).

What about local training in all of this? Well, she struggled until the equalizer, the unfortunate Conté, put under pressure by Biron after a corner topspin by Rocha (29th). Reinvigorated by this gift from the Chamois, the ASNL had the opportunity to take the advantage, when Biron procrastinated too much before addressing a cross acrobatically picked up by Scheidler, above (36th).

The new XXL center forward, on loan from Dijon on Tuesday, did not score for his baptism in Nancy but he was decisive in an aerial duel by causing the expulsion of Doukansy, sanctioned with a second yellow card in added time of the first act (45 + 1e).

The Nancéiens could consider themselves happy at the break, with a numerical superiority for the whole second half. Because before the end of this sad half-time, Ba again wasted a big opportunity, with a header (40th). But ASNL failed to take advantage of this ideal situation on paper. Nancy found a way to be led again, on a second goal from Ba receiving a love ball from Boutobba (62nd). This gave a last unbridled half hour, with a push from the ASNL and dangerous counters from Niort. Nancy should have obtained a penalty for a Niort hand (65th), Scheidler also touched the bar on an involuntary center-shot (74th).

Biron wanted to put away!

But the turning point is the 3-1 ball for the Chamois missed by Konaté (75th). It was finally Nancy who equalized thanks to a header from the inevitable and incredible Biron, on a new corner from Rocha (82nd).

The little Biron who had the honesty to recognize, after the match, his desire to make a discount on this one! A little bowl for a big egg! But this is a point that does not advance the standings. On the contrary, Nancy is back one place, 17th now.

These were the details of the news Football / Ligue 2. One point saved, two lost for Nancy! for this day. We hope that we have succeeded by giving you the full details and information. To follow all our news, you can subscribe to the alerts system or to one of our different systems to provide you with all that is new.