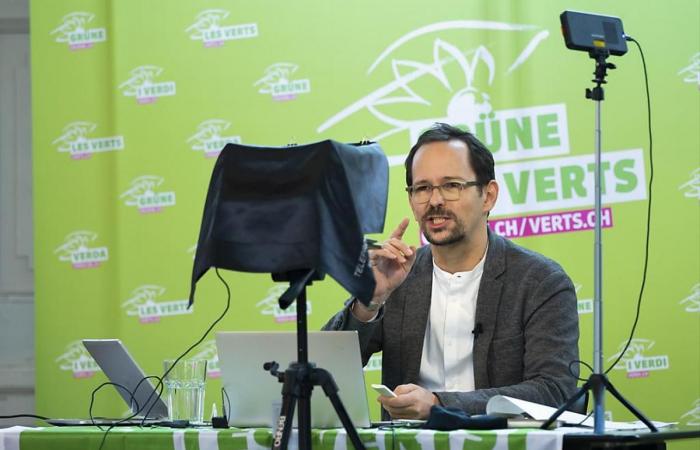 On Saturday, the assembly of delegates of the Greens validated a climate plan and gave their recommendations for the votes of March 7.

The Greens adopted their revised climate plan on Saturday and further strengthened it on certain points. They also called for an economic and societal turn, and advocated a triple no for the votes of March 7.

“Human beings are more than what they own and consume,” party chairman Balthasar Glättli said at the opening of the party’s assembly of delegates online.

“We want to give our society and our economy the necessary framework so that our production is no longer based on the predation of nature and individuals”, he added.

Delegates adopted the party’s climate plan, calling for political and technical measures to deal with global warming. By 2030, Switzerland must become “climate neutral” by reducing its internal CO2 emissions by at least 50%. By 2040 at the latest, it should be climatically positive by reducing CO2 emissions into the atmosphere both in Switzerland and abroad.

In particular, the Greens are calling for a ban, from 2025, on all new vehicles running on fossil fuels and oil heaters.

The Greens’ plan is necessary and urgent, because the objectives of the Federal Council and the parliamentary majority remain too timid, the party said in a statement. In particular, a program of impulses for a climate-friendly exit from the pandemic is missing.

The updated Energy Outlook 2050, published by the Federal Council at the end of 2020, is insufficient to counter the climate crisis. And the CO2 law is only an important first step towards achieving the goals of the Paris Agreement.

“With the climate plan, we want to define a freedom that does not destroy its own foundations, a freedom of being and of the future”, commented Balthasar Glättli.

In times of pandemic also, the injunction of the moment is rather oriented towards “sharing instead of hoarding” and towards “solidarity rather than fear of indebtedness”, underlined the president of the Greens. Instead, we are faced with a bourgeois policy of austerity which arouses a fear of tomorrow in many people.

Switzerland cannot afford to have a federal councilor like Ueli Maurer, who still urges fiscal discipline at the heart of the biggest crisis ever, blasted Balthasar Glättli.

The Greens also approved a resolution on internet policy on Saturday. Entitled “For a greener digital era”, it advocates that the Web guarantee democratic rights, freedom of information, human rights and privacy.

Environmentalists demand that the digital communication infrastructure be designed from open interfaces, to prevent any monopoly. In addition, social networks must take joint responsibility for their content.

For the Greens, an international charter, laws at national and cantonal levels as well as a state strategy on digitization are essential.

Finally, the formation adopted its watchwords for the votes of March 7, recommending a triple no. No to the free trade agreement with Indonesia, which contains no binding rules for sustainable palm oil.

The agreement does not put an end to climatic or environmental nuisances, nor does it protect the local population.

No also to the law on electronic identity.

The central IT infrastructure must be owned by the state and not be completely privatized, say the Greens.

Finally, the Greens also unanimously say no to the burka ban. Under the pretext of equality, this initiative turns public opinion against Muslims and thus joins the populist strategy of exclusion.

These were the details of the news Switzerland – Greens adopt revised climate plan for this day. We hope that we have succeeded by giving you the full details and information. To follow all our news, you can subscribe to the alerts system or to one of our different systems to provide you with all that is new.