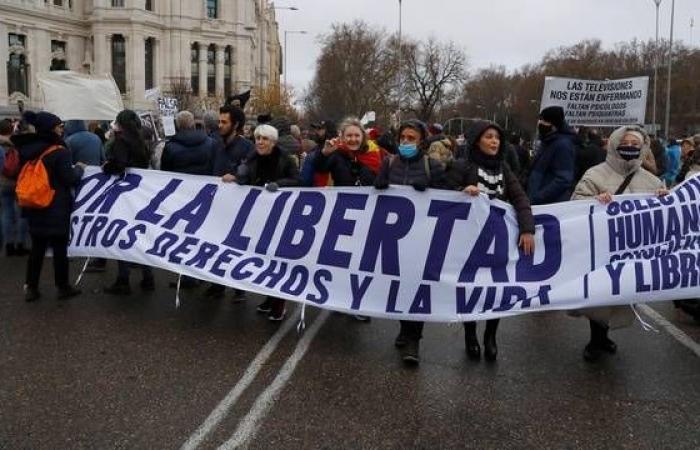 Despite the third wave, which has killed more than 400 people a day this week in Spain, anger has mounted in Madrid against the health measures. Thousands of people demonstrated in the center of the capital on Saturday to protest against government restrictions to contain the epidemic. They also denounced the “deception” of a virus which according to some demonstrators “does not exist”.

To the cries of “Freedom! And in an atmosphere hostile to the press, thousands of people marched from Atocha station to Plaza Colon. Many demonstrators did not wear masks, despite the legal obligation to wear them at all times on public roads.

“People have to take off their blindfolds, be less afraid and realize that it’s just a bad flu, that you have to wait for it to pass and that’s it,” said Milagros Solana, a 71-year-old retiree. “Mortality is lower than in other years,” she added, downplaying the official tally, which has more than 55,000 dead and 2.5 million confirmed cases of Covid-19 in Spain since the start of the pandemic .

An air of conspiracy

Beside her, a friend showed photos on her phone claiming that “hospitals are empty” in a country where more than a third of intensive care beds are occupied by coronavirus patients, and where several centers had to evacuate other patients to make room for other patients with the virus. Many protesters also criticized the ongoing vaccination campaign as a method to end the epidemic.

In an attempt to stem the pandemic, the government has decreed a nighttime curfew and the restriction of mobility between regions. In Madrid, hotels must now close at 9 p.m.

These were the details of the news Several thousand protesters in Madrid against restrictions for this day. We hope that we have succeeded by giving you the full details and information. To follow all our news, you can subscribe to the alerts system or to one of our different systems to provide you with all that is new.