the pandemic has pushed thousands of children to work 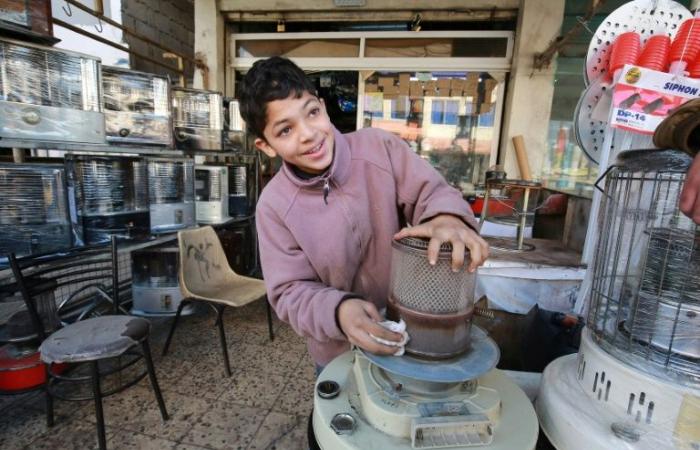 The health crisis has compromised Omar’s dreams of becoming a pilot. Every morning, he has a pang in his heart when he walks past the closed doors of his college in a disadvantaged district of Amman to join the workshop where he repairs kerosene stoves.

In Jordan, the closure of schools for nearly a year has pushed thousands of children, according to an NGO, to early work with all the more urgency as the pandemic has often deprived their father of his income. bread.

They joined the 76,000 children who, according to official figures from 2016, are forced to work, although the law prohibits work for those under 16.

“As soon as the schools reopen I go back. I don’t want the corona to destroy my dream. I would love to continue my studies to become a pilot,” said Omar, 14.

But he will have to wait.

The ministry announced the reopening in February of kindergartens, elementary and terminal classes.

The other levels must return to school in March.

Dressed in a pink sweater and stained jeans, Omar works to clean a radiator grill before tackling the stove with his blackened hands.

“As the school is closed, I help my family financially. I work from 9 in the morning to 9 in the evening. It doesn’t bother me. What is unbearable is the smell of kerosene,” he says. -he.

“As soon as I get home, I shower, I soap myself but the smell does not disappear. I am so exhausted that I eat quickly and go to bed,” he adds.

He receives 3 dinars per day (3.4 euros), which allows him to contribute to the rent which amounts to 130 dinars (about 151 euros) per month. A living wage, especially as his father, a daily worker, is like many others without a job, because of the epidemic.

“We do not have precise figures but we fear that with the corona the number of working children has increased. It is also logical because we know that the poverty rate is increasing”, explained to the ‘AFP the representative of Unicef ​​in Jordan, Tania Chapuisat.

A finding corroborated by Khader Abu Zaid, 58, who rents dozens of handcarts in the popular market in the Wahdat district.

“Since the schools were closed due to the pandemic, the number of children who rent my carts has increased,” he says.

“Now, only young people between 12 and 17 years old load on the market”, he explains and according to him they earn about five dinars per day (5.8 euros), and sometimes more.

This is the case of Moustafa, 12, who also found himself on the street after the schools were closed.

“For several months, I have been transporting vegetables and chickens to the market,” he said, pulling his cart full of food. He claims to earn five dinars.

“I rent my cart for one dinar a day and I give the other four to my family to help with expenses,” he says.

According to official figures, the poverty rate was 15.7% in Jordan in the fall of 2020 but the World Bank predicted a short-term increase of 11 points.

Jordan, which has recorded more than 317,000 cases of Covid-19 including more than 4,180 fatalities, began its vaccination campaign last week, but the situation does not give cause for optimism.

Director of the Jordanian Labor Observatory NGO, Ahmad Awad estimates that thousands of children have been working since the start of the health crisis, and he says he fears that this phenomenon “will increase considerably because of the pandemic”.

For the coordinator in Jordan of the International Labor Organization (ILO), Farida Khan, children from poor families suffer from the lack of face-to-face education.

“Most families with poor education are unable to help their children with distance learning,” she says.

“We know that only 31% of school children in Jordan have access to the Internet and among them a quarter never connects to a learning platform”, further assures Ms. Chapuisat.

These were the details of the news the pandemic has pushed thousands of children to work for this day. We hope that we have succeeded by giving you the full details and information. To follow all our news, you can subscribe to the alerts system or to one of our different systems to provide you with all that is new.