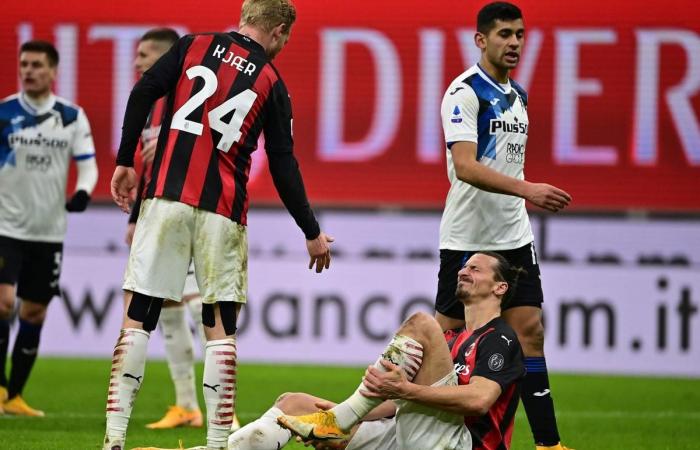 AC Milan were crushed by Atalanta in San Siro (0-3). Zlatan Ibrahimovic and his teammates owe their honorary title only to Inter’s new draw in Udine (0-0).

AC Milan, despite a rout at home against a dashing Atalanta Bergamo (0-3), on Saturday won the honorary title of winter champion while preserving at the end of the first leg two lengths over Inter Milan, hooked by Udinese (0-0).

The rossonero club took the lead at the halfway point for the first time in ten years, during the 2010/11 season, which was also the season of their 18th and last scudetto. If it is purely honorary, this title comes to salute the recovery of the Milanese for a year, with the youngest team in Serie A in average age, led by a starving tutor at nearly 40, Zlatan Ibrahimovic.

The heavy defeat on Saturday against Atalanta, radiant at San Siro where it played its Champions League matches last season, however, comes as a reminder of how difficult it will be to keep this unexpected first place. The Milanese, long undefeated, have indeed conceded their second defeat in less than three weeks, after the setback against Juventus (1-3).

Still handicapped by a few important absences, including its Turkish leader Hakan Cahlanoglu (coronavirus), AC Milan has remained silent for the first time this season in the league. More worrying: the opportunities were quite rare, even if Zlatan Ibrahimovic was close to equalizing (41st) and if the rookie Mario Mandzukic could also have scored just after coming into play (70th).

The only consolation for Milan: Inter have – again – missed the opportunity to steal first place by failing to win at Udine. Antonio Conte’s team, yet fully pumped up by their victory over Juventus (2-0) last weekend, confirms their difficulties away from home, with two points in the last three trips.

Lautaro Martinez (23rd), Nicolo Barella with a superb volley (29th) and Achraf Hakimi (76th) yet had the goal that would have offered the title of winter champion at the end of their feet. What annoy Antonio Conte, excluded at the end of the match.

Roma snatched three precious points against La Spezia at the very end of the match thanks to a goal from their captain Pellegrini in stoppage time. The last act of a somewhat crazy match (4-3).

These were the details of the news Football – AC Milan winter champion corrected for this day. We hope that we have succeeded by giving you the full details and information. To follow all our news, you can subscribe to the alerts system or to one of our different systems to provide you with all that is new.