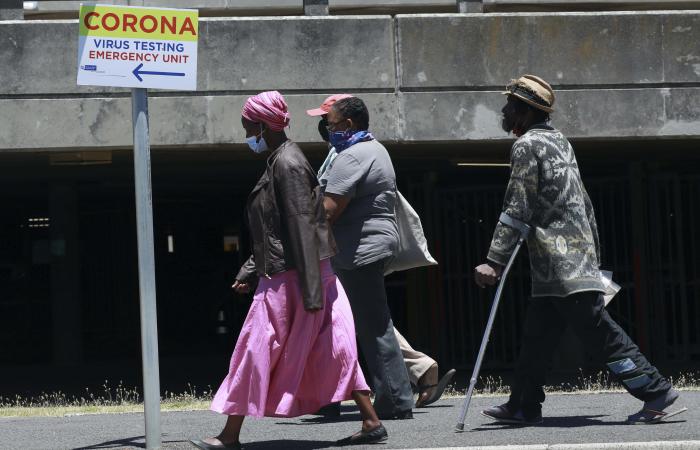 The death rate from the novel coronavirus in Africa now stands at 2.5% of recorded cases, above the global average of 2.2%.

The number of cases on the continent has, meanwhile, increased by 14% per week over the past month. These are the data provided this week by the Africa CDC, the Center for Disease Control and Prevention.

Since the start of the pandemic, Africa remains officially one of the least affected continents, with 3.3 million cases of Covid-19 and almost 82,000 deaths, according to the organization, but according to its director John Nkengasong, the

The increase in the death rate marks a break with the first wave, when it had remained below the world average. “We are witnessing a turnaround“, he added. “This is one of the notable characteristics of the second wave, which we must fight hard.“

This excess mortality is caused by the acceleration in the number of cases, which clogs health systems on the continent, according to Mr. Nkengasong.

The dynamics of the epidemic “exceeds the capacity of nurses and physicians to manage patients“, he explained.”Patients are not getting the attention and care they need as we have a limited number of beds and supplies. “Mr. Nkengasong particularly underlined the need for oxygen, used to treat severe forms of Covid-19, which are becoming”critiques“.
In Nigeria, the most populous country in Africa, health authorities report having to “choose which patients to take care of and which to refuse treatment“, he detailed.

The AU announced last week that it had ordered 270 million vaccines for the continent, in addition to those planned through the Covax device, an initiative of the World Health Organization (WHO) and private partners for equitable access to vaccines.
Negotiations are “In progress“with Russia and China to order additional doses, but”we don’t have an agreement at the moment“.

In addition, the World Health Organization and Pfizer-BioNTech announced on Friday an agreement that should make it possible to provide 40 million doses of the pharmaceutical giant’s anti-Covid-19 vaccine to underprivileged countries, through the Covax system.

The Covax system therefore estimates that it can begin distributing vaccines to these countries by the end of February.

Doses of Pfizer-BioNTech vaccine – 95% effective – will be provided “at cost price“and should be delivered during the first quarter, said the boss of Pfizer, specifying that this is a”premier” lot.

The parties have yet to reach a delivery agreement, they said in a statement.

Covax has also exercised an option with the Indian vaccine manufacturer Serum Institute of India (SII) for 100 million doses of the vaccine developed by AstraZeneca / Oxford.

The majority of these doses should be delivered during the first trimester. But first the WHO must give emergency approval to this vaccine and this manufacturer, around mid-February, said a joint statement from the WHO and the Alliance for Vaccines (Gavi).

Some 50 million additional doses of the AstraZeneca / Oxford vaccine, which had already been agreed, are expected to be added next month as well.
But again on condition that the other laboratories, where it will also be manufactured, are approved by the WHO.

So far, only Pfizer-BioNTech’s vaccine has received emergency WHO approval, but several others are in final review stages.

The challenge of vaccination

As much as the arrival of effective vaccines against Covid-19 which has already killed more than 2 million people since it was reported in December 2019, in China, “is a light at the end of the tunnel”, “it is not the vaccines alone that will help us end this pandemic, it is the vaccination“, said WHO Director-General Tedros Adhanom Ghebreyesus.”

The rapid and equitable distribution of vaccines is not only a moral imperative, it is also a health, strategic and economic security imperative.“, he underlined.

The Covax system, led by the WHO, Gavi and also the Coalition for Innovations in Epidemic Preparedness (CEPI), aims to provide by the end of 2021 anti-Covid vaccines to at least 20% of the population of participating countries, but above all it includes a funding mechanism that allows the 92 disadvantaged countries participating to have access to valuable doses.

If the vaccination campaigns began at the end of last year, the vast majority are carried out in the richest countries.

Asked how many doses vaccine manufacturers will be able to deliver this year, Seth Berkley, Gavi’s executive director, replied: “I think we are talking about numbers in a range of 6-7 billion“.

The WHO has also announced that it will launch again in January a window where disadvantaged countries can submit their detailed vaccination plan (who will receive the vaccines in priority, how and where they will be administered, etc.).
“This is a vital step before any allocation can be made, to ensure that the doses delivered will be effectively deployed and to detect where to provide more support, if needed.“, says the press release.

These were the details of the news Africa facing a deadly second wave for this day. We hope that we have succeeded by giving you the full details and information. To follow all our news, you can subscribe to the alerts system or to one of our different systems to provide you with all that is new.