The French handball team present at the World Cup in Egypt has “a lot of character”, estimated its coach Guillaume Gille on Saturday on the eve of the clash against Portugal, the last match before the quarter-finals.

For the Blues, brilliant at the opening against Norway (28-24) but who then struggled to beat Switzerland, Algeria and Iceland, “the Portuguese challenge comes at the right time to assess where is” the team, the coach said via video conference.

The victory, after a match that was still complicated to take shape. We were able to find the resources, especially in the final packaging, to win and it was essential to put ourselves in good conditions for the end of this main round and the prospect of this quarter-final. I am happy with the start, with a fairly stable defensive footing against these Icelanders who are very good overloaders with a lot of speed and enthusiasm. We were very solid in the six against six, much less in the open space, whether it is us towards their goal or in our withdrawal where we have been too many times a little chastised on the counterattack. prevented from taking the measure of this Icelandic team over time, despite very good things done on both sides of the field. Here too, it is an axis of progress for us. “

Q: As against Switzerland (25-24) and Algeria (29-26), France suffered but managed its end of the match well. Does your team have holy fire?

The state of mind is very good, it is also linked to this desire to overcome difficulties, not to let oneself be overcome by the problems encountered. In this group, there is a lot of character, a lot of temperament with people who love competition and refuse to lose, who want at all costs to get this victory and who cling to it. I don’t know if it’s a trademark but we were able to negotiate these phases well. decisive end of the meeting and it is thanks to the state of mind. On these decisive moments, the contents are interesting. Whether in defense, in relation with our goalkeeper, or in attack, on these balls which weigh, we were efficient and that is what is essential at a very high level. “

Q: A loss of less than seven goals against Portugal would be enough to advance to the quarterfinals. How to avoid calculations?

A: “Clearly, we are not in this notion of calculation. We are on a path where we try, exit after exit, to accumulate experience, to solve a certain number of problems, to grow as a team and the next obstacle is Portugal, a benchmark at European level for a few seasons which has caused us a lot of problems in our last confrontations. So, we are centered on the idea that this match would open the quarterfinals to us. final. We play it completely disregarding this context of accounts. We know the different possible scenarios, the worst thing would be to start imagining that we are capable of managing a result and being able to get out of it that way “There. We need to continue to progress.

The Portuguese challenge comes at the right time to assess where we are.”

These were the details of the news Handball World Cup: for Gille, the Blues have “a lot of character” for this day. We hope that we have succeeded by giving you the full details and information. To follow all our news, you can subscribe to the alerts system or to one of our different systems to provide you with all that is new. 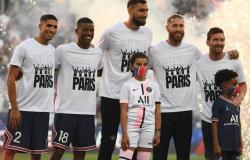