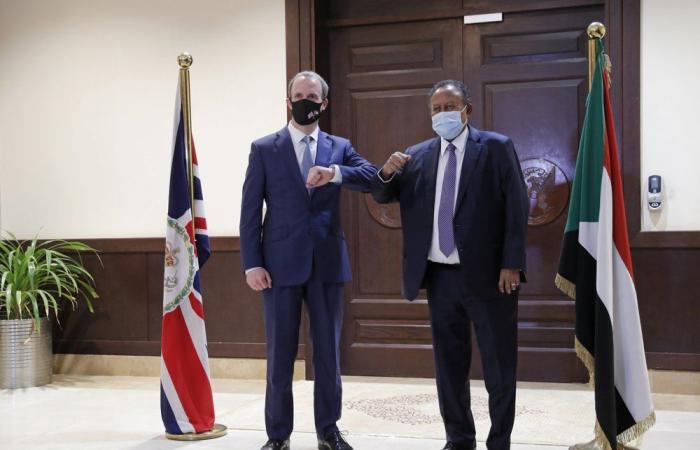 On a visit to Khartoum, Dominic Raab and Sudanese Minister of Finance and Economic Planning Heba Mohamed Ali Ahmed signed a memorandum of understanding under which Britain commits to disbursing economic aid worth 40 million British pounds, or about $54.8 million, to the African country, SUNA reported.

Sudan is on a fragile path to democratic rule after a popular uprising led the military to overthrow longtime autocrat Omar al-Bashir in April 2019, after nearly three decades of rule. A military-civilian government is now in power but struggles with a wide range of economic challenges, including crippling debt, widespread shortages of essential goods such as fuel, bread and medicine, and a three-digit inflation rate.

“This is the first visit by a British foreign secretary to Sudan in more than ten years,” said Rosie Diyas, Britain’s spokesperson for the Mideast and North Africa. “The visit aims at supporting Sudan’s transition to democracy and civilian rule.”

The British aid will finance cash handouts to 1.6 million poor Sudanese, said Diyas. Aid recipients are expected to be those most hit by the economic reforms, slashing of subsidies and the reduction of public spending that the Sudanese government is expected to implement in order to reduce its huge public deficit.

Sudan’s transitional government has been racing against the clock to garner economic and political support of Western powers in order to end decades of its pariah status and secure reliefs of its crippling debt.

In the weeks before leaving office, former President Donald Trump removed Sudan from the list of state sponsors of terrorism, a move that allows Khartoum to get international loans. Sudan’s economy has suffered from decades of US sanctions and mismanagement under al-Bashir, who had ruled the country since a 1989 Islamist-backed military coup. The removal of the terror designation came after Sudan followed in the footsteps of other key Arab countries, including the United Arab Emirates and Bahrain, by normalizing relations with Israel.

Last year, Western and Arab countries pledged a total of $1.8 billion in aid to back Sudan at a donor meeting in Berlin. At the time, Britain pledged 66 million euros, more than $186 million.

According to Diyas, the UK has also offered another $6.87 million in aid to address Sudan’s urgent needs emanating from the influx of more than 50,000 Ethiopian refugees, who have recently fled their country following the eruption of war in Ethiopia’s Tigray province.

Shortly before boarding his Ethiopia-bound plane, Raab told reporters at Khartoum’s airport that his government hopes Ethiopia and Sudan can resolve the ongoing border dispute in “a sensible way”.

In recent weeks, the Sudanese army has deployed thousands of troops along the Ethiopian border and reclaimed territories controlled by Ethiopian militias. The Sudanese advances came on the heels of cross-border attacks that killed and wounded many Sudanese troops. The border tension raised concerns over a potential military conflict between the neighboring countries.

“We have a longstanding friendship with Sudan and likewise a strong partnership with Ethiopia. Our message is, let’s not at this precarious moment for the region see an escalation of tension,” said Raab, adding that he would reiterate the same message to the Ethiopians during his visit there.

Raab had also meant to discuss with Sudanese officials the ongoing water dispute between Egypt, Sudan and Ethiopia, SUNA reported earlier. The news agency did not later say if anything came out of those discussions. The dispute is about Ethiopia’s construction of a controversial dam on the Blue Nile River, the main tributary of the Nile, which Egypt says endangers its critical share of the Nile waters.

These were the details of the news UK backs Sudan economic reforms with over $50 million for this day. We hope that we have succeeded by giving you the full details and information. To follow all our news, you can subscribe to the alerts system or to one of our different systems to provide you with all that is new.