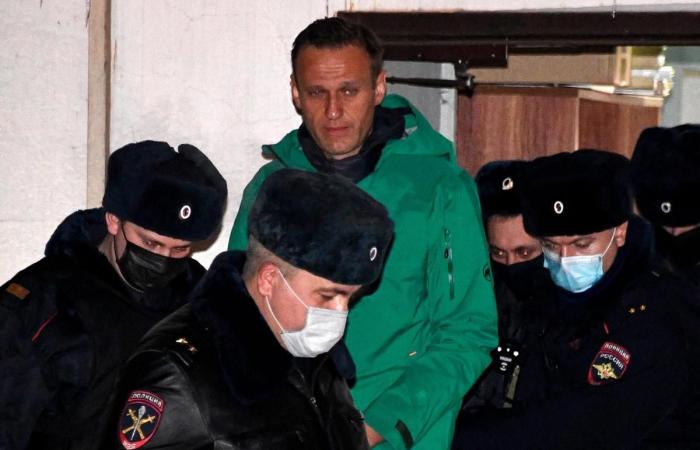 The Russian authorities on Thursday arrested five collaborators of the imprisoned opponent Alexeï Navalny, while trying to curb calls for demonstrations fueled by the hearing record of an investigation accusing Vladimir Putin of corruption.

Alexei Navalny’s team called on their supporters to “take to the streets” on Saturday in 65 Russian cities to demand the release of their leader, detained since his return to his country on Sunday after months of convalescence in Germany for poisoning presumed.

“She was arrested for calling for unauthorized demonstrations,” her lawyer, Vladimir Voronin, told AFP.

The spokesperson for the opponent, Kira Iarmych, was also arrested Thursday evening, after a search of her Moscow home, she said on Twitter.

Another important collaborator of Alexei Navalny, Georgi Albourov, also announced on Twitter that he had been arrested, for his part at a station in the Russian capital.

Of Belarusian nationality, Vladlen Los, a lawyer for the opponent’s anti-corruption organization, told him that he had been arrested and had been ordered to leave Russia.

Navalny’s team in Krasnodar (southwest) also indicated that its manager, Anastassia Pantchenko, had also been arrested. Faced with the mobilization scheduled for Saturday, the prosecution announced measures to “limit access to illegal information” disseminated online and constituting “calls to participate in illegal mass actions”.

For its part, the Interior Ministry said it was ready to “protect public order” and promised to prosecute the authors of calls to demonstrate on the internet.

The day before, the Russian telecommunications gendarme Roskomnadzor issued a warning to the Tik Tok and Vkontakte platforms, the Russian equivalent of Facebook, ordering them to block content considered to be calls for “minors to participate in illegal activities. “.

On Thursday, Roskomnadzor also threatened with fines of up to four million rubles (44,600 euros) internet platforms that will not remove “prohibited information”.

After his arrest on Sunday, Alexeï Navalny retaliated on Tuesday by broadcasting an investigation into the huge and sumptuous property he claims to enjoy by President Vladimir Putin, on the shores of the Black Sea, and whose construction would have cost more than a billion dollars. ‘euros.

Thursday evening, this long investigation accompanied by a video of nearly two hours had already been seen more than 47 million times on YouTube.

The Kremlin rejected all of these allegations, denouncing an “attack” against Vladimir Putin and calling members of Alexei Navalny’s team “crooks”.

This video fueled thousands of social media posts relaying the call to demonstrate for the opponent’s release.

Youth is particularly mobilized on Tik Tok, while several personalities including actors, musicians and athletes have announced their support for Alexeï Navalny.

The former captain of the Russian football team, Igor Denissov, usually not very interested in politics, judges as well as the opponent, for whom he has “great respect”, “must be released”.

The very popular Russian Youtuber Yuriy Doud denounced a “scandalous” situation in a publication posting more than 835,000 “likes” on Instagram.

Alexeï Navalny, whose release is demanded by the EU and the United States, was arrested on his return from several months of convalescence after an alleged poisoning he suffered in August in Siberia.

He accuses the Kremlin of being responsible, which Moscow denies, seeing no evidence and denouncing a plot involving the West.

The opponent, detained at least until February 15, is targeted by several cases for “defamation”, “fraud” or for violation of the conditions of a suspended prison sentence dating from 2014.

The interested party considers that these accusations are a matter of judicial harassment and have a political character.

These were the details of the news Russia – Police arrest Navalny allies ahead of protests for this day. We hope that we have succeeded by giving you the full details and information. To follow all our news, you can subscribe to the alerts system or to one of our different systems to provide you with all that is new.