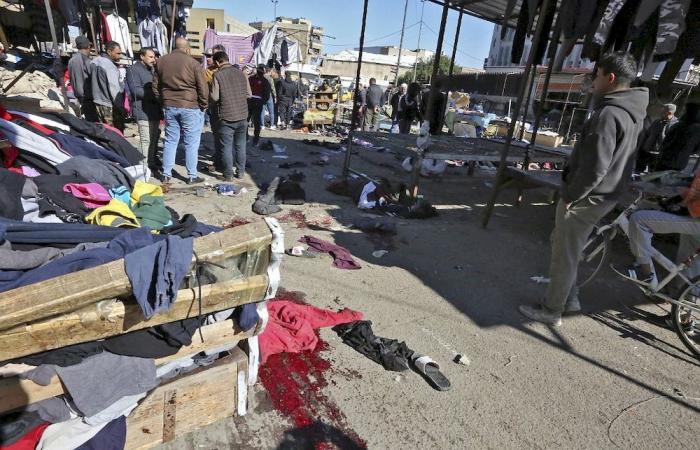 At least 28 people were killed and another 73 wounded in the attack on a huge open-air market for second-hand clothes in the Iraqi capital’s Tayaran Square.

The market had been teeming with people following nearly a year of restrictions imposed across the country in a bid to halt the spread of Covid-19.

According to an interior ministry statement, the first suicide bomber rushed into the market, claiming to feel sick.

Once a crowd of people had gathered around him, he detonated his explosives.

As people then flocked around the victims, a second attacker detonated his bomb, the ministry said.

An AFP photographer at the scene said security forces had cordoned off the area, where blood-stained clothes were strewn about the muddy streets.

Paramedics were working to remove casualties, and Iraq’s health ministry said it had mobilised medics across the capital.

Today’s attack was the bloodiest incident in Baghdad since January 2018, when a suicide bomber also in Tayaran Square killed more than 30 people.

Suicide bombings had been commonplace in Baghdad during the sectarian bloodletting that followed the US-led invasion of 2003.

Later on, as the Islamic State group swept across much of Iraq, its jihadists also targeted the capital.

But with the group’s territorial defeat in late 2017, suicide bombings in the city became rare.

Baghdad’s notorious concrete blast walls were dismantled and checkpoints across the city removed.

Today’s attack comes as Iraqis prepare for an election, events which are often preceded by bombings and assassinations.

The 2018 attack took place just a few months before Iraq’s last round of parliamentary elections.

Prime Minister Mustafa al-Kadhemi had originally set this year’s general election for June, nearly a year ahead of schedule, in response to widespread protests in 2019.

But authorities are in talks over rescheduling them to October in order to give electoral authorities more time to register voters and new parties.

Today’s twin attack was not immediately claimed but suicide bombings have been used by ultra-conservative Islamist groups, most recently IS.

The jihadist factions seized a third of Iraq in 2014 and was dangerously close to the capital, but a ferocious three-year fight by Iraqi troops pushed them back.

Still, the US-led coalition that had been supporting Iraq’s campaign against IS has significantly drawn down its troop levels over the past year, citing the increased capabilities of Iraqi troops.

They are mainly in charge of training, providing drone surveillance and carrying out air strikes while Iraqi security forces handle security in urban areas. — AFP

These were the details of the news Twin suicide blasts in Baghdad leave nearly 30 dead for this day. We hope that we have succeeded by giving you the full details and information. To follow all our news, you can subscribe to the alerts system or to one of our different systems to provide you with all that is new.