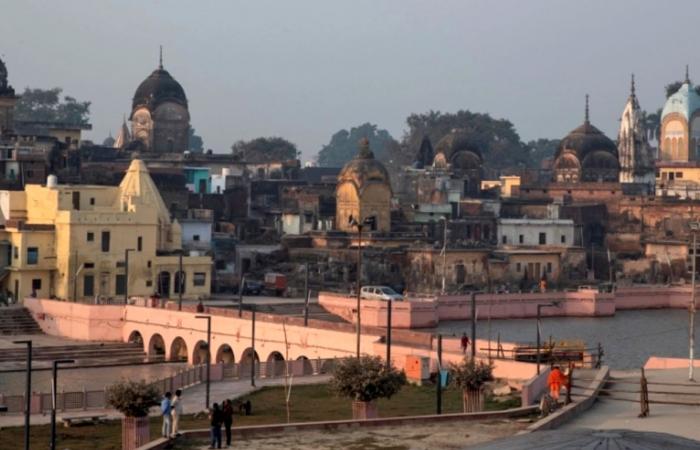 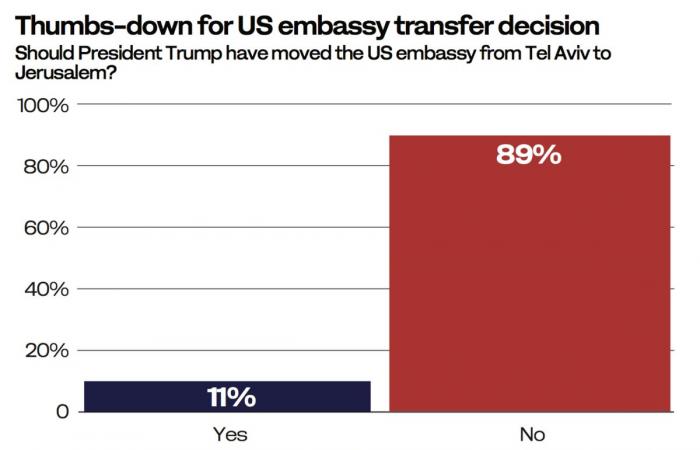 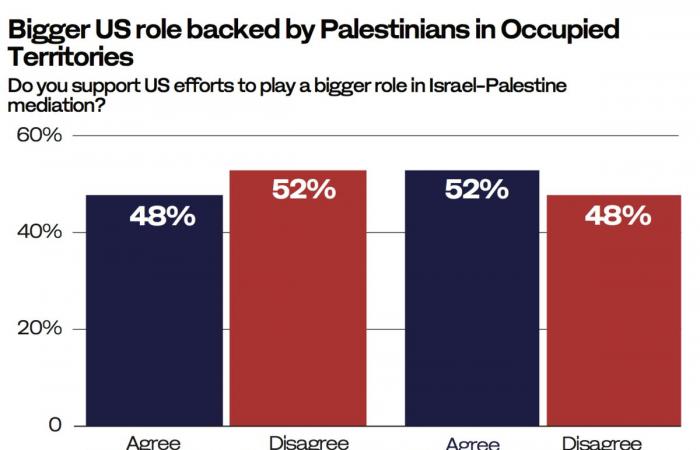 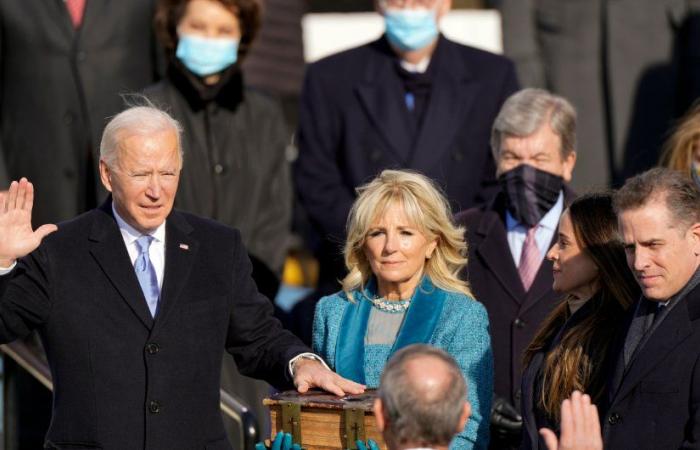 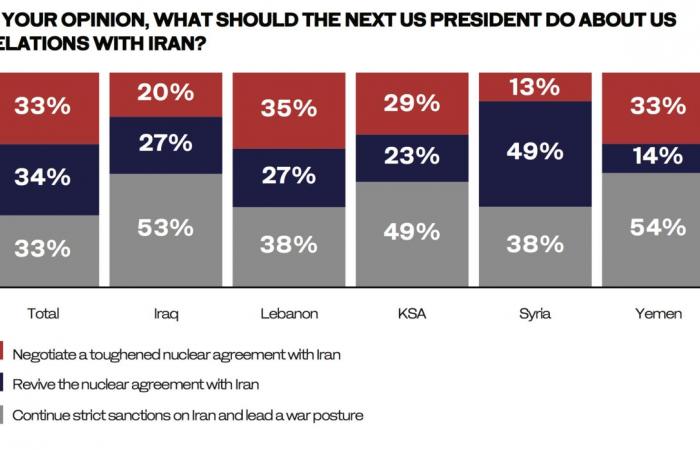 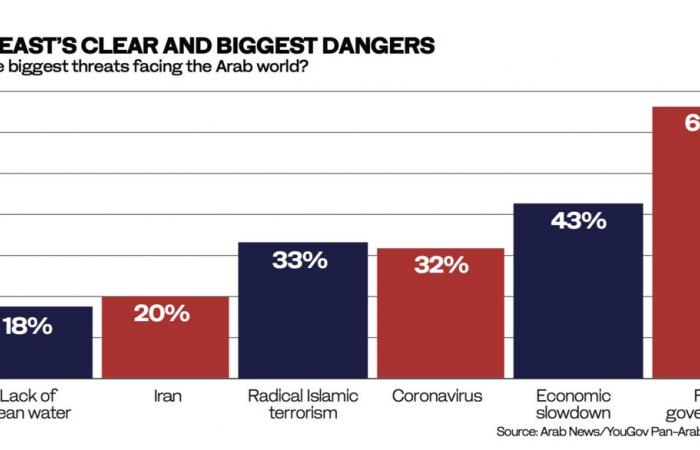 Jeddah - Yasmine El Tohamy - LONDON: Joe Biden has become the 46th president of the US, having defeated Donald Trump in an election last November whose outcome evidently failed to heal the political rifts plaguing the country. Trump did not attend Wednesday’s inauguration ceremony.

Complicating matters, a worsening coronavirus crisis and heightened security risks cast a shadow over the inauguration, which saw Biden and Kamala Harris take the oath of office respectively as president and vice president.

While Biden will probably have his hands full tackling the pandemic, a sputtering economy and a growing partisan divide, foreign-policy issues are also expected to get high priority, especially considering his long stint as chairman or ranking member of the Senate Foreign Relations Committee. 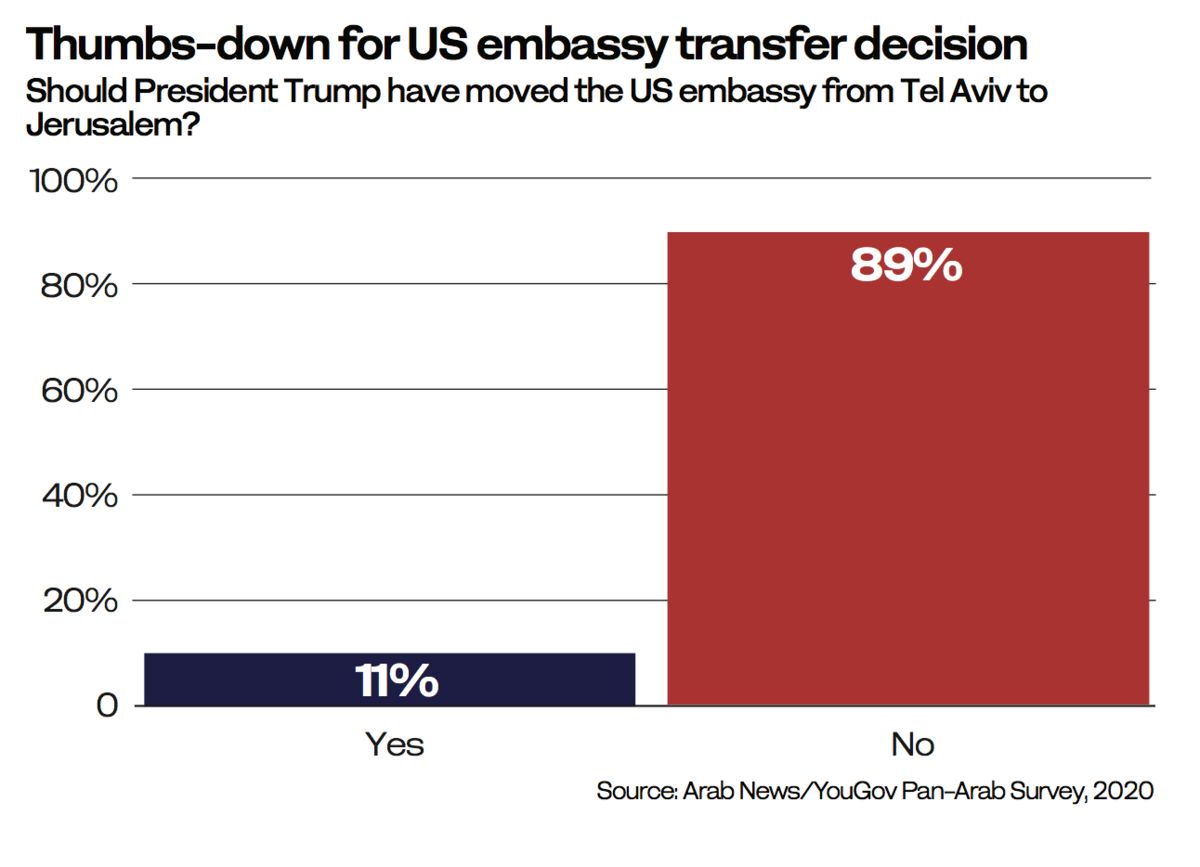 As far as the Middle East is concerned, Biden will have his fair share of challenges. Nearly half (49 percent) of the respondents in a pan-Arab survey conducted in late September last year by Arab News in partnership with YouGov, the online polling company, said they believed neither Biden nor Trump was necessarily good for the region.

But that does not mean he cannot break free from the legacy of the Obama administration, in which he served as vice president for two terms. Biden’s advisers would be well advised to listen to the views from the Arab region in shaping the new administration’s Middle East policy. 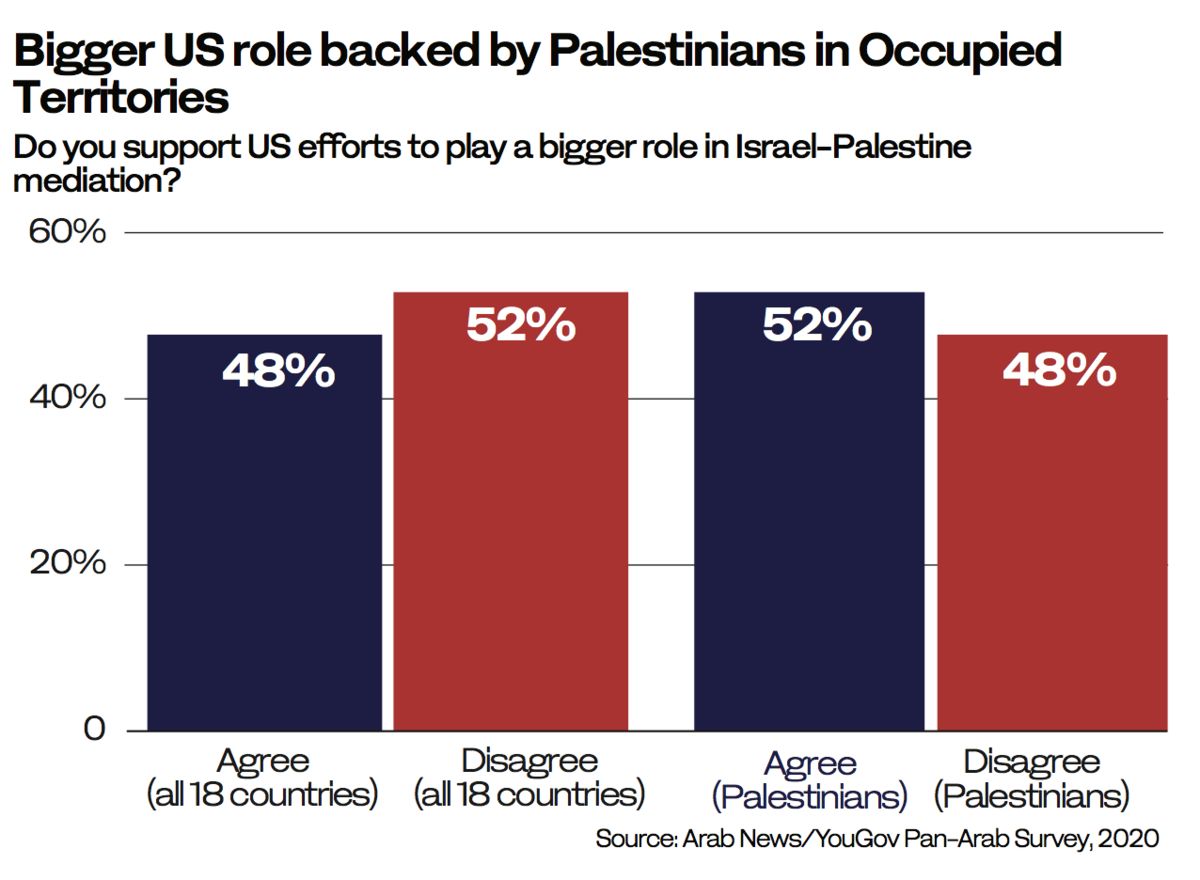 A majority (58 percent) of the Arab News-YouGov poll’s respondents said Biden should discard the approach to the Middle East of his former boss, Barack Obama. The survey, which questioned people in 18 countries in the Middle East and North Africa, showed that Obama’s policies remain unpopular among Arabs, who were disappointed by his failure to deliver the “new beginning” he promised during a speech at Cairo University in 2009.

The study — “The 2020 US Elections - What do Arabs want?,” published on Oct. 25, 2020 — also showed that 44 percent of Arabs view youth empowerment as a key driver of global development and believe it should be a priority for the Biden administration.

Arabs’ disappointment with the Trump administration is understandable. In Jan. 2017, he signed an executive order that banned foreign nationals from seven predominantly Muslim countries from visiting the US for 90 days. The ban suspended entry of all Syrian refugees indefinitely, and prohibited any other refugees from coming into the US for 120 days.

The executive order created an environment of fear among students from Arab countries, driving many to seek higher-education options in Europe. During the first coronavirus lockdown in July, the Trump administration also pushed for the cancellation of all visas issued to international students studying in the US, because they were no longer attending classes in person.

This plan was abandoned following pressure from universities that make millions of dollars in tuition fees from foreign students, and from US companies that often hire highly skilled foreign workers who begin their careers in America after graduating from the nation’s top universities. Biden will not be encumbered by these unpopular Trump decisions and Arabs are unlikely to bear him any ill will in this regard. 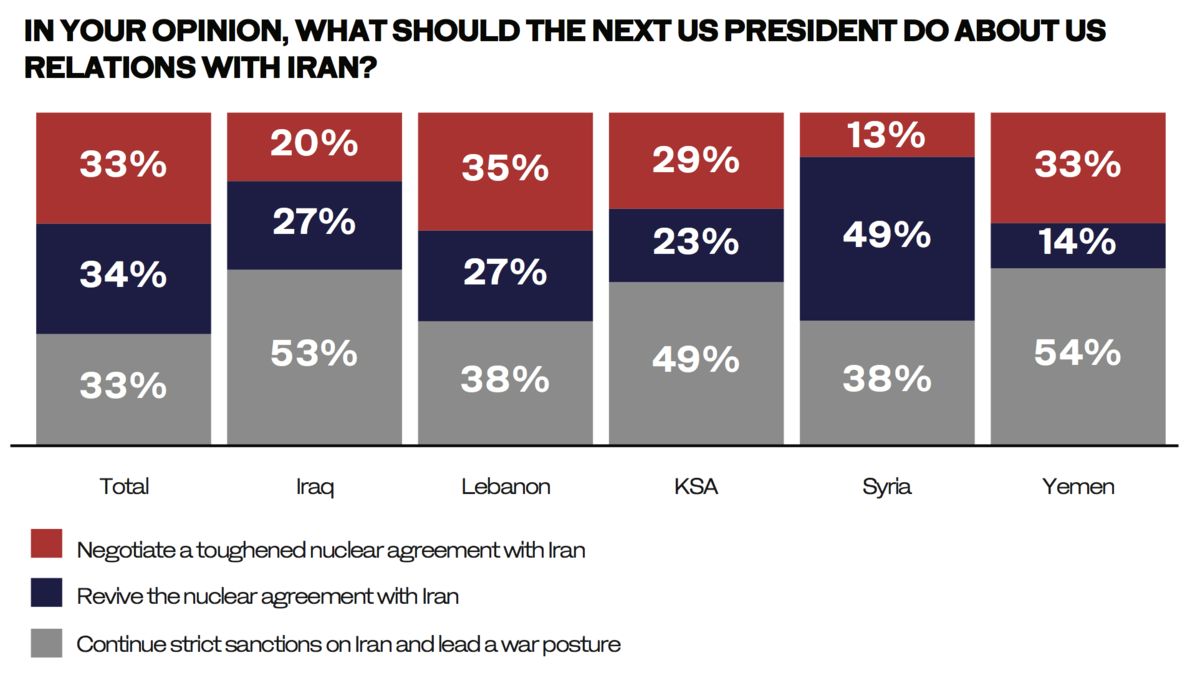 That said, there are Trump-era policies that will give Biden a strong leg up in dealing with strategic competitors and malign actors. Take Washington’s approach to Iran. A large proportion of the pan-Arab survey’s respondents — 49 percent in Saudi Arabia, 53 percent in Iraq and 54 percent in Yemen — favored maintaining Trump’s strict sanctions and war posture.

It is notable that respondents in Iraq and Yemen — two countries that have intimate dealings with Iran in the sense that they are overrun with non-state actors controlled by Tehran — were strongly in favor of maintaining a hard line.

The survey did show mixed Arab views on the elimination by the US in January 2020 of Iran’s powerful military commander, Qassem Soleimani, the head of Quds Force, the division of Iran’s Islamic Revolutionary Guard Corps (IRGC) responsible for extraterritorial military and clandestine operations.

Nevertheless, overall the findings suggested a widespread rejection of President Obama’s strategy of addressing Iran’s ambitions through the 2015 nuclear accord, or the Joint Comprehensive Plan of Action (JCPOA), while turning a blind eye to its regional plans and expansionist agenda. The nuclear deal was viewed by Israel and Washington’s Arab allies as giving a free hand to the IRGC to create havoc in Syria, Yemen, Iraq, Lebanon,  and Palestine.

Trump withdrew the US from the JCPOA in 2017 and applied a policy of “maximum pressure” that is widely regarded as having put Tehran on the defensive, both strategically and financially.

The US secretary of state-designate, Anthony Blinken, told his confirmation hearing before the Senate Foreign Relations Committee this week that the new administration has “an urgent responsibility” to do what it could to stop Iran acquiring a nuclear weapon. He added that a new accord could address Iran’s “destabilizing activities” in the region as well as its missiles.

As Nadim Shehadi, associate fellow of Chatham House in London, wrote recently, “Iran has a clear strategy of perpetual war against the US and, through its IRGC proxies, collapsing states, building alternative institutions and gaining control.”

The good news is that Biden does not have to choose withdrawal or capitulation. He has been dealt a strong hand against Iran by Trump which he simply has to play to win, for the sake of the US and its allies and partners, and, in the long term, for the Middle East's security, stability and prosperity.

These were the details of the news India’s Muslims ‘living in fear’ amid temple funding drive for this day. We hope that we have succeeded by giving you the full details and information. To follow all our news, you can subscribe to the alerts system or to one of our different systems to provide you with all that is new.