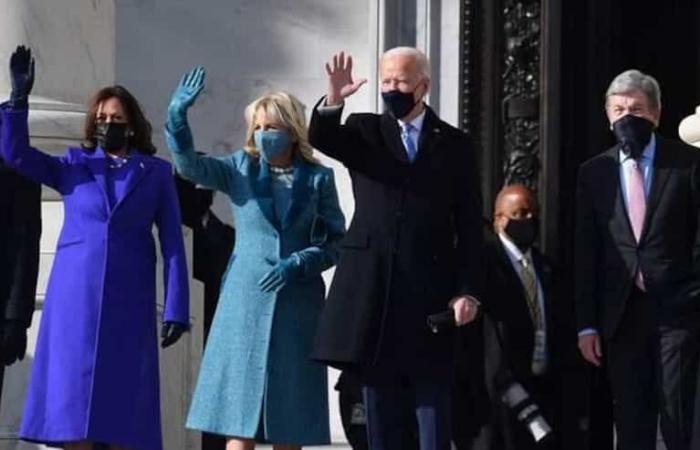 WASHINGTON | A page is turning in the United States.

• Read also – [EN DIRECT] Historic day in the United States: comments and analyzes from our experts

President-elect Joe Biden and his future vice-president Kamala Harris arrived on Capitol Hill on Wednesday, where they will be sworn in shortly before noon in front of former presidents Barack Obama, George W. Bush and Bill Clinton, but en l’absence de Donald Trump.

The Democrat will be invested 46th President of the United States in an unprecedented ceremony marked by the pandemic and the deadly assault on Capitol Hill on January 6 by supporters of the Republican billionaire. Outgoing Republican Vice President Mike Pence will be in the gallery, but not Donald Trump, a first for 150 years in American history.

Joe Biden, 78, arrived accompanied by his wife Jill Biden, 69. The couple climbed the Capitol steps along with Kamala Harris, 56, and her husband Doug Emhoff, 56.

President-elect and Kamala Harris will be sworn in on the grandstand in front of a few guests, but in the absence of the hundreds of thousands of Americans who traditionally gather on the vast plaza of the National Mall every four years for the nomination. Of the president.

In their place, nearly 190,000 flags were planted to represent this public absent in a barricaded Washington, under high military guard, two weeks after the violence of the Capitol which left five dead.

In the galleries were already crowding parliamentarians, including loyal allies of Donald Trump until the last days of his mandate, such as Senators Lindsey Graham and Ted Cruz.

10:51 am | Supreme Court bomb threat ahead of Biden’s inauguration

The United States Supreme Court, located opposite the Capitol where Joe Biden is to be sworn in on Wednesday noon, received a bomb threat in the morning, according to a spokesperson.

“The building and its surroundings have been checked and there has been no evacuation,” Kathleen Arberg told AFP.

The high court has been closed to the public since the start of the pandemic and its staff reduced a minima. Even hearings are held by telephone.

10:32 am | Joe Biden and Kamala Harris arrive on Capitol Hill to be sworn in

President-elect Joe Biden and his future vice-president Kamala Harris arrived on Capitol Hill on Wednesday, where they will be sworn in shortly before noon in front of former presidents Barack Obama, George W. Bush and Bill Clinton, but in the absence of Donald Trump. .

The Democrat will be invested 46th President of the United States in an unprecedented ceremony marked by the pandemic and the deadly assault on Capitol Hill on January 6 by supporters of the Republican billionaire. Outgoing Republican Vice President Mike Pence will be in the gallery, but not Donald Trump, a first for 150 years in American history.

9:27 am | US President Donald Trump left a letter to his successor Joe Biden before leaving the White House, executive spokesman Judd Deere told AFP minutes after his departure.

Donald Trump, who refused to accept defeat for more than two months, never congratulated Joe Biden on his victory.

Mail left in the Oval Office for his successor is an American tradition. “We are only temporary occupants of this post,” Barack Obama wrote to him four years ago. “This makes us guardians of democratic institutions and traditions such as the rule of law, the separation of powers, the protection of civil rights for which our ancestors fought,” he added.

9:08 am | United States President-elect Joe Biden attended a mass at St. Matthew’s Cathedral in Washington accompanied by Democratic and Republican leaders in Congress, a symbol of coming together three hours before his term in office.

The future 46th President of the United States was joined by his wife Jill Biden, Democrats Nancy Pelosi, Speaker of the House of Representatives, and Chuck Schumer, Senate Minority Leader, as well as Republican leaders in the upper house Mitch McConnell and the lower house Kevin McCarthy.

Outgoing US President Donald Trump flew to Florida on Wednesday, a few hours before the swearing in of Joe Biden who arrives at the White House posing as a unifier of a divided, worried, bruised country.

If he finally wished his successor good luck in a video message, the stormy billionaire has never congratulated him and – unprecedented for 150 years – will sulk his inauguration ceremony in Washington.

At the end of a mandate marked by an avalanche of scandals and two “impeachments”, Donald Trump leaves power at the lowest in the polls, cut off from part of his camp horrified by the violence on the Capitol on January 6 .

Just before leaving, he pardoned 73 people, including his former advisor Steve Bannon, accused of embezzling funds allegedly intended for the construction of a wall on the border with Mexico.

After a brief ceremony at the Andrews military base in suburb of Washington, he flew one last time aboard Air Force One to join his club in Mar-a-Lago, Florida, where he will begin. his life as a former president.

Joe Biden, who takes the presidency at 78 years after half a century in politics, intends to mark from day one the contrast – in both substance and form – with the former businessman from New York.

“We don’t have a second to waste in dealing with the crises we face as a nation,” he tweeted Tuesday night.

From Wednesday, he will take 17 presidential actions to return to Donald Trump’s flagship measures, notably by committing the return of the United States to the Paris climate agreement and to the World Health Organization.

Immunologist Anthony Fauci will speak on behalf of the United States at a WHO executive board meeting on Thursday, said Jeff Zients, who is coordinating the new administration’s response to the COVID-19 pandemic.

To limit the spread of the virus, the president will also sign an executive order to make it compulsory to wear a mask in federal buildings, or for federal agents.

Tuesday evening, shortly after his arrival in Washington, he paid a solemn tribute to the victims of COVID-19, taking the opposite view of Donald Trump who for months tried to minimize the impact of a pandemic that has made more 400,000 deaths in the United States.

“To heal, we have to remember. It’s hard to remember sometimes, but that’s how we heal, ”he said in front of the towering Abraham Lincoln monument.

The former right-hand man of Barack Obama then collected, to the sound of Leonard Cohen’s song “Hallelujah”, facing the 400 lights lit around the rectangular basin in which the Washington Monument was reflected.

A few hours earlier, when leaving his home in Delaware, he had been very moved, tears running down his face. “Excuse my emotion, when I die Delaware will be written in my heart,” the Democrat said, echoing the words of Irish author James Joyce.

No crowds, but flags

This day of consecration for Joe Biden takes place in a very particular climate, under the combined effect of the pandemic and the trauma still fresh from the violence of the Capitol which left five dead.

The security measures surrounding the ceremony are exceptional. Some 25,000 National Guard troops and thousands of police from across the country will be deployed. Proof of the prevailing tension: twelve of them were removed from the security system as part of a procedure to search for possible links with extremist groups, the Pentagon said on Tuesday.

Far from the huge crowds who traditionally throng on the huge esplanade of the “National Mall” to see their new president, the former vice-president of Barack Obama will face more than 190,000 flags planted to represent this absent public.

In the meantime, the process of confirmation by the Senate of the ministers appointed by the president-elect began on Tuesday, so that the government is ready for action as soon as possible in the face of the numerous crises.

On the diplomatic front, the future Secretary of State, Antony Blinken, has promised to break with four years of unilateralism by “reinvigorating” the alliances damaged under Donald Trump.

But the future head of American diplomacy also declared that the Republican had “been right” to have adopted a “firmer position against China””.

Europe “has a friend again in the White House” launched European Commission President Ursula von der Leyen hours before Joe Biden’s inauguration, while European Council President Charles Michel invited him to a meeting with European Union leaders to “To build together a new founding pact”.

Iranian President Hassan Rohani was delighted to the “end” of the era of the “tyrant” Donald Trump.

On the economy side, the next Treasury Secretary Janet Yellen called for “thinking big” in responding to the crisis caused by the pandemic and therefore postponing concerns about the public deficit.

These were the details of the news [EN DIRECT] US turns the page Trump, Biden takes over the White House for this day. We hope that we have succeeded by giving you the full details and information. To follow all our news, you can subscribe to the alerts system or to one of our different systems to provide you with all that is new.