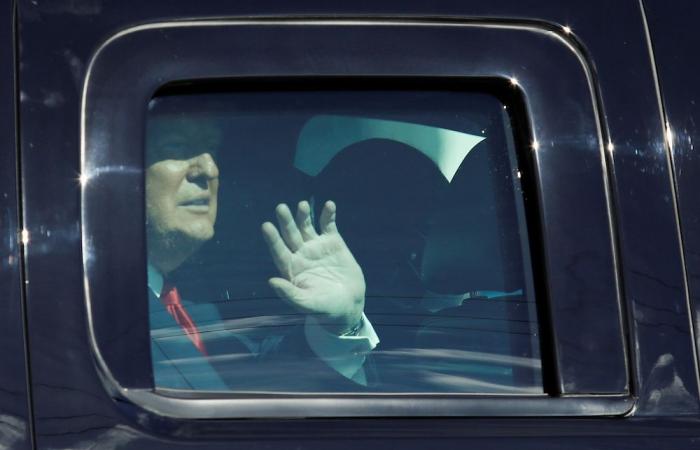 Hello and welcome to the details of Trump exits after four turbulent years, his presidency in tatters and now with the details

WASHINGTON, Jan 21 — Donald Trump led the United States for four tumultuous years with a right-wing populist approach and an “America First” message, but left office with his presidency in tatters and the country’s democratic institutions dented after a calamitous last chapter.

The Republican businessman-turned-politician produced policy accomplishments including tax cuts, curbs on legal and illegal immigration, a rightward shift of the federal judiciary, a rollback on environmental rules deemed burdensome and diplomatic deals between close US ally Israel and Arab states.

Having lost his bid for re-election, Trump on Wednesday bequeathed new Democratic President Joe Biden a United States bitterly divided along regional, political, socioeconomic and racial lines amid a relentless Covid-19 pandemic and a wounded economy.

In his final weeks in office, Trump promoted false claims of widespread voter fraud, stood accused of inciting a mob of supporters to rampage through the US Capitol and became the first president ever to be impeached twice.

An exodus of senior officials including Cabinet members shaken by the Capitol attack left him increasingly isolated in his final days at 1600 Pennsylvania Avenue. He retreated from governing after the election even as the pandemic intensified.

Trump’s administration provided financial backing for Covid-19 vaccine development efforts, but after the first vaccines won regulatory authorisation in December, it failed to plan for mass vaccinations to get the shots into people’s arms.

The US Covid-19 death toll surged past 400,000 on his last full day as president on Tuesday. About 40 per ent of the pandemic’s US toll occurred after the Nov. 3 Election Day.

Ignoring the advice of public health experts to wear a protective mask, Trump personally endured a bout with Covid-19 and was hospitalized for three days of treatment before returning vigorously to the campaign trail in October.

Shortly before the US Congress met on Jan. 6 to certify the election’s outcome - typically a perfunctory task - Trump delivered an incendiary speech repeating his false claims of a stolen election and exhorted thousands of supporters gathered near the White House to march on the Capitol.

“We will not take it anymore,” Trump told his supporters. “... If you don’t fight like hell, you’re not going to have a country anymore.”

Their assault on the Capitol delayed formal certification of Biden’s victory while they clashed with police, vandalizing the building and forcing lawmakers to hide for their own safety. Five people died in the violence.

A week later the Democratic-led House of Representatives impeached him on a charge of inciting an insurrection, setting up a post-presidency Senate trial and possible disqualification from ever again holding the presidency - a first in American history. Twitter and other social media companies stripped him of the platforms that he had until then used so effectively.

After decades of fame first as a brash and media-savvy New York real estate developer and then as a reality TV personality, Trump, 74, tapped into discontent among many Americans to become a political phenomenon unique in the country’s 244 years. He won election in an Electoral College upset against Democrat Hillary Clinton in 2016 in his first run for public office, though he lost the national popular vote by about 3 million.

At rallies as a candidate and president, Trump soaked in the adulation of supporters, many wearing red baseball caps emblazoned with his slogan, “Make America Great Again.” They cheered his taunts against Democrats, liberals and elites, and his attacks on journalists as “the enemy of the people.”

On the world stage, Trump abandoned international agreements he cast as unfair to the United States including a nuclear deal with Iran and a climate accord, alienated longtime allies and praised authoritarian foreign leaders.

He showed deference to longtime US adversary Russia and its president, Vladimir Putin. US intelligence agencies concluded that Russia used a campaign of hacking and propaganda to boost Trump’s 2016 candidacy and interfered again during the 2020 campaign to try to denigrate Biden.

After the Nov. 3 election, Trump plunged the United States into a political crisis by falsely claiming victory while his lawyers and allies spun an unfounded tale of an international conspiracy to rig the outcome against him.

His campaign and supporters challenged Biden’s victories in election battleground states, but failed to present solid evidence to back up their claims, losing in court after court.

The judicial rulings were exemplified by US District Judge Matthew Brann, who wrote that a Pennsylvania Trump lawsuit wholly lacked legal merit, adding: “This claim, like Frankenstein’s Monster, has been haphazardly stitched together.”

With record voter turnout, Biden defeated Trump with a tally of 306 votes to 232 in the state-by-state Electoral College and a national popular vote margin of more than 7 million.

Trump became the first incumbent president to lose a re-election bid since George H.W. Bush in 1992. Trump also became the first president since Herbert Hoover in 1932 during the Great Depression to lose the White House and see his party lose both chambers of Congress in a single term.

Critics including senior Democrats and former members of his own administration portrayed Trump as a peril to democracy with autocratic tendencies. They also faulted him for using the executive clemency powers of the president to benefit friends and allies.

“He is a clear and present danger to the nation that we all love,” House Speaker Nancy Pelosi said during the Jan. 13 impeachment debate, calling Trump “a vital threat to liberty, to self-government, and to the rule of law.”

Even through his many controversies, Trump maintained passionate support among many Americans, especially white men, Christian conservatives, rural residents and people without a college education. Critics accused Trump of pursuing policies built around “white grievance” in a nation with a growing non-white population.

His detractors also denounced Trump for employing falsehoods. Fact-checkers listed thousands of them during his presidency.

Trump pushed back at questions about his mental state.

“Actually, throughout my life, my two greatest assets have been mental stability and being, like, really smart,” Trump wrote on Twitter in 2018, describing himself as “a very stable genius.”

In his first impeachment, the House in December 2019 charged him with abuse of power and obstruction of Congress after he asked Ukraine to investigate Biden and his son on unsubstantiated corruption accusations. The Republican-led Senate kept Trump in office by acquitting him in February 2020.

A special counsel appointed by the Justice Department, Robert Mueller, documented 2016 Russian election interference to sow discord in the United States, disparage his Democratic opponent Clinton and help Trump. Mueller detailed numerous contacts between Trump campaign figures and Russians. Both the campaign and Russia denied any wrongdoing. Trump called the investigation a “witch hunt” and declared “complete and total exoneration.”

Mueller’s report did not accuse Trump or his campaign of a criminal conspiracy with Russia, but nor did it exonerate Trump of committing obstruction of justice in trying to impede the investigation. Trump’s attorney general subsequently cleared him of obstruction.

In farewell remarks at Joint Base Andrews after leaving the White House on Wednesday, Trump promised supporters, “We will be back in some form,” and boarded Air Force One for a flight to Florida that took off while Frank Sinatra’s classic song, My Way played over a loud speaker. — Reuters

These were the details of the news Trump exits after four turbulent years, his presidency in tatters for this day. We hope that we have succeeded by giving you the full details and information. To follow all our news, you can subscribe to the alerts system or to one of our different systems to provide you with all that is new.