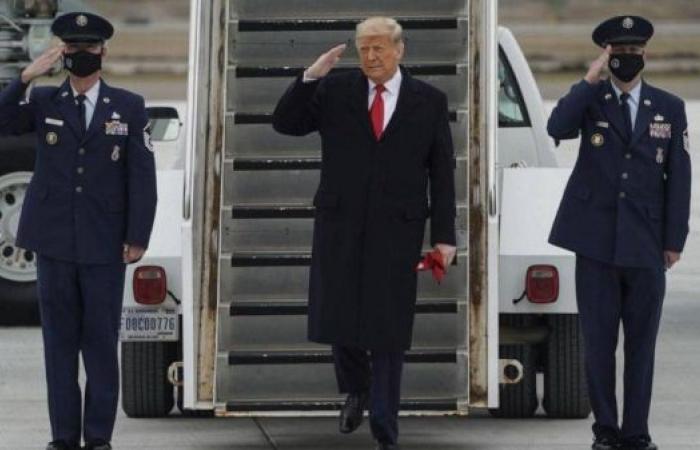 Hind Al Soulia - Riyadh - WASHINGTON — US President Donald Trump touted his achievements during his four-year term while speaking to supporters at Joint Base Andrews on Wednesday morning as he left Washington on his final day in office.

"It is my greatest honor and privilege to have been your president," he said to cheers. "I wish the new administration great luck and great success, and I think they'll have great success. They have the foundation to do something really spectacular."

The tone was a shift from previous weeks, in which continued to insist without evidence that he did not lose the election, an insistence that culminated in a mob of his supporters attacking the Capitol in an effort to stop President-elect Joe Biden's election from becoming official.

Breaking with decades of tradition, Trump will not participate in the peaceful transition of power and is skipping the inauguration. He opted for a rally-like set up at the military airfield, complete with large speakers blasting his campaign playlist, American flags, and several hundred supporters.

He did not mention Biden by name in his remarks, instead urging supporters to credit him for future economic and coronavirus victories.

Trump's brief speech diverged from the prepared words aides had distributed ahead of the send-off. His remarks were off-the-cuff and somewhat somber in tone. Trump touted a few items of his presidential legacy, including Space Force and judicial confirmation, and said his team had "left it all, as they say, on the field."

He thanked his family, Chief of Staff Mark Meadows, First Lady Melania Trump, and Vice President Mike Pence, and hinted at his own political future.

"We will be back in some form," he said.

The outgoing president typically departs shortly after the incoming president is sworn in, on a special air mission government jet. But Trump, who fought bitterly to overturn the results of the 2020 election, opted to orchestrate an alternative fanfare-filled exit while he is still commander-in-chief and can fly on Air Force One en route to his Mar-a-Lago home in Palm Beach, Florida. — Agencies

These were the details of the news Trump leaves White House for last time as president for this day. We hope that we have succeeded by giving you the full details and information. To follow all our news, you can subscribe to the alerts system or to one of our different systems to provide you with all that is new.