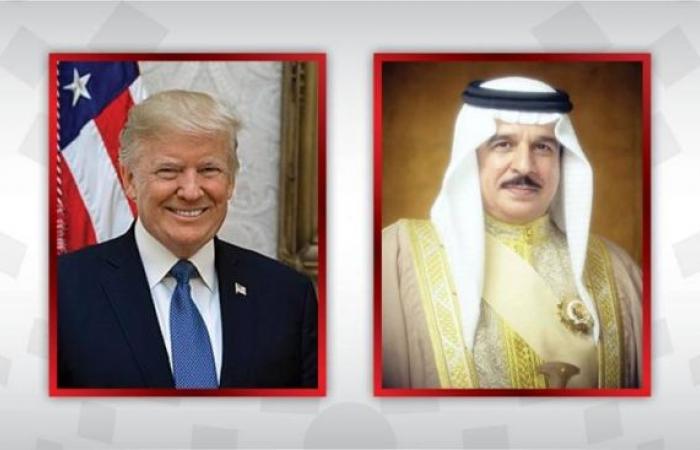 MANAMA — Bahrain's King Hamad bin Isa Al Khalifa has expressed his deep thanks and appreciation to US President Donald Trump for awarding him the Legion of Merit, Degree Chief Commander.

King Hamad highlighted the steady development of the outstanding relations between Bahrain and the United States and affirmed that the Middle East today is safer and more stable than before and that he looked forward to cooperation among all countries in the region to face the challenges and to build a promising and peaceful future.

The Bahraini king indicated that Bahrain, as a close and long-standing ally of the US, is proud to work with US friends in various fields and that its designation by the US as a major strategic partner embodies this partnership and establishes stronger and more robust relations to enhance security and promote peace in the region and the world.

On Monday, Trump granted the ‘Legion of Merit’ to Bahraini King Hamad bin Isa Al Khalifa, in recognition of his role in supporting regional and international stability.

The Legion of Merit, Degree Chief Commander, is a rarely-awarded, prestigious decoration that can only be bestowed by the president, typically to chiefs of state or heads of government of other countries.

Trump expressed pleasure at presenting the Legion of Merit to King Hamad, noting, “under King Hamad’s decades of steady leadership as Crown Prince, Emir, and King, Bahrain has proved to be an indefatigable ally of the US.”

Moreover, the US president praised the Bahraini king’s support for the vision of peace and his decision to establish full diplomatic ties with Israel, noting that his decision “has started a new era of economic and security cooperation among the US key partners in the Middle East.”

These were the details of the news Bahrain king thanks Trump after being awarded US Legion of Merit for this day. We hope that we have succeeded by giving you the full details and information. To follow all our news, you can subscribe to the alerts system or to one of our different systems to provide you with all that is new.