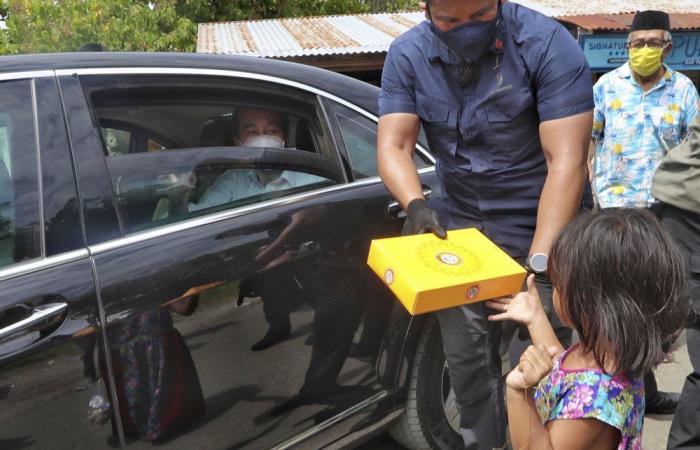 You are now following the details of the After seeing floods, Indonesian leader visits quake zone news and now we leave you with the details

The 6.2 magnitude earthquake Friday that killed at least 84 people was one of multiple recent disasters in Indonesia.

President Joko Widodo, who visited a flood-hit area on Borneo island on Monday, visited the quake-hit areas of West Sulawesi province Tuesday to reassure people the government’s response is reaching those who are struggling.

He pledged to rebuild government buildings that collapsed and to help people rebuild their damaged houses with aid of up to 50 million rupiah ($3,560) as he toured the hard-hit city of Mamuju, a city of nearly 300,000 people and the provincial capital.

“We hope with the assistance by the central government can hasten recovery of collapsed houses and economy,” he said in a speech after visiting survivors being housed in shelters on a soccer field. “The government services should be returned to normal,” he said.

The National Search and Rescue Agency counted at least 30,000 survivors who have moved to shelters in Mamuju and its neighboring district of Majene in West Sulawesi, as the government and aid agencies pooled efforts to meet the survival needs of shaken communities.

Four days after the disaster, the streets of Mamuju were still covered in debris and most people have slept outdoors, fearful their homes would crumble if strong aftershocks come. Sniffer dogs were being used to search for bodies and possible survivors.

The president had traveled Monday to flood-affected areas in South Kalimantan province on Borneo, the island known for rainforests and orangutans where floods since last week have inundated several regions. The floods killed several villagers and forced tens thousands of people to flee their homes. Floods also reported in many other provinces in the vast archipelago nation.

The quake and flood disasters follow a deadly landslide in West Java on Jan. 9 that left 40 people buried in tons of mud. On the same day, a Sriwijaya Air jet nosedived into the Java Sea, killing all 62 people on board.

Indonesia also last week began vaccinating health workers with a COVID-19 vaccine in a campaign that aims to immunize two-thirds of the population in the world’s fourth most populous country. It has confirmed more than 917,000 infections and 26,000 deaths from the pandemic, the most in Southeast Asia.

And on Saturday, Mount Semeru, the highest volcano on Indonesia’s most densely populated island of Java, spewed hot clouds as far away as 4.5 kilometers (nearly three miles). The eruption caused panic but no casualties.

Indonesia, home to more than 260 million people, is lined with seismic faults and is frequently hit by earthquakes, volcanic eruptions and tsunamis. Annual monsoon flooding also causes problems, and its transit infrastructure is often weak and stretched beyond its capacity.

By NINIEK KARMINI and YUSUF WAHIL

Image: Indonesian President Joko Widodo is helped by his bodyguard to hand out a box of food to a young girl from inside his car during his visit at a quake-hit area in Mamuju, West Sulawesi, Indonesia, Tuesday, Jan. 19, 2021. Widodo visit the areas where a deadly earthquake left thousands of people homeless, to reassure them the government’s response is reaching those struggling after the quake. (AP Photo/Josua Marunduh)

These were the details of the news After seeing floods, Indonesian leader visits quake zone for this day. We hope that we have succeeded by giving you the full details and information. To follow all our news, you can subscribe to the alerts system or to one of our different systems to provide you with all that is new.