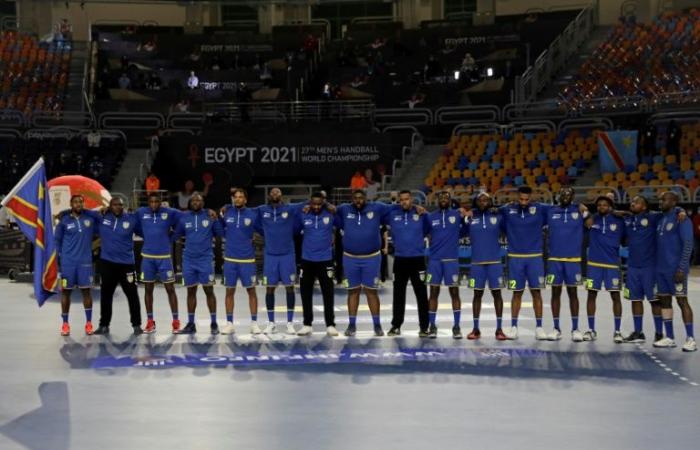 Handball players from the Democratic Republic of the Congo, for many Franco-Congolese semi-professionals playing in the Paris basin, will change dimension on Sunday by facing the Denmark of Mikkel Hansen and Niklas Landin, defending champion, at the World Cup in which they participate for the first time in Egypt.

Caen, Massy, ​​Savigny-sur-Orge, Dreux, Vernouillet … Having moved from their small clubs in the Paris basin to the prestigious Cairo hotel where they rub shoulders with Danish and Swedish references, the Congolese internationals are living “a waking dream”, sums up the center-half or left-back Daniel Mathey, who is playing this season at Bruges-Lormont, in the Bordeaux metropolitan area (N1).

There is Audray Tuzolana (ex-Nantes), passed through Germany and Denmark, or captain Aurélien Tchitombi (ex-Chartres), but most have not broken through at the high level. “Who would have thought that by playing in N1, I could have participated in the World Championship?”, Relishes winger Jacques Kizonzolo, one of the 13 players playing in France in a group of 20. “There are players who have spent their entire lives in D1 and who have never made a World Championship … “

It’s been done since Friday and a frustrating defeat against Argentina (28-22), against which the Leopards were level for a period (14-13 at the break) before cracking lengthwise.

Now place “the icing on the cake”, according to Mathey, with Denmark on Sunday. “This match will be a consecration for us. For our first participation, we have the chance and the honor to have the reigning world champion”, appreciates the coach Francis Tuzolana, also trainer of Dreux (N2) where he also directs his brother Audray and the pivot Gauthier Mvumbi.

Tuzolana, 40-year-old civil co-ownership manager and himself a former Congolese international, watched Danish stars Hansen (PSG) and Landin (Kiel) at the end of December play in the Final Four of the Champions League, just before preparing his troops in Eaubonne, in the Val-d’Oise. “I said to myself: in a few weeks, these gentlemen will be in front of me …”

If Tuzolana, aware of the gap, did not tick this match, “the objective is to go to the main round”. This therefore requires a victory over Bahrain, the last opponent in the first round on Tuesday, to “show that we did not steal our place,” insists Mathey.

Because if the DRC is invited to the table of the great, it is thanks to the enlargement, from 24 to 32 teams, of the world plateau in Egypt. That they rallied at the end of the suspense by winning the 7th and last qualifying place in the last African Championship (CAN) against Gabon, behind the usual heavyweights, Egypt, Tunisia, Algeria, Angola and Morocco, and another neophyte, Cape Verde.

A “historic moment for the country”, remembers Botetsi, who attended the hope center of Ile-de-France in Eaubonne – where the selection organizes its internships – and touched the high level in Tremblay-en -France (D1). Failing to be able to settle in the pro team, the rear or right winger then wandered in Yverdon-les-Bains (Switzerland), then in Martigues, before returning to Saint-Ouen-l’Aumône (N1), not far from Mantes-la-Jolie where he grew up.

Always by accumulating allowances from these semi-amateur clubs – generally between 500 and 1000 euros per month – and food work. “In Switzerland, I worked in home automation; in Marseille, I was a supervisor in a college.” Like his teammate Kizonzolo in Saint-Nazaire (N2), a club that had found him a place in a high school.

The two wingers have resumed studies, Botetsi (30 years old) to become a social educator, Kizonzolo (27 years old) in sports marketing. Gone is the “childhood dream” of becoming a professional, “the injuries have been there,” recalls Mathey (27), who became a salesperson. Crusaders, patellar tendon, meniscus …

“We do not all have the same course,” sweeps Kizonzolo who hopes that the adventure of the World Cup will allow the Congolese to catch the eye of elite clubs. This requires a success against Bahrain, necessarily historic.

These were the details of the news Congolese neophytes, from the French D3 to the Danish world champion for this day. We hope that we have succeeded by giving you the full details and information. To follow all our news, you can subscribe to the alerts system or to one of our different systems to provide you with all that is new.

PREV Pope urges Iraqis to shun past violence and give peace a chance
NEXT Trump, returning to political stage, flirts with 2024 run