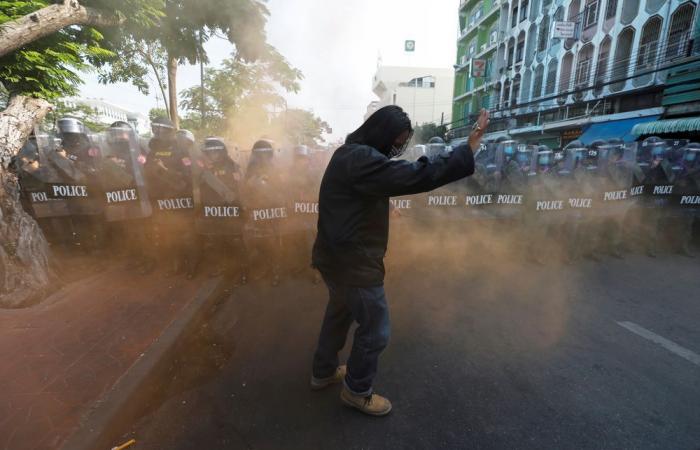 BANGKOK, Jan 11 — Thai authorities today charged four democracy activists with royal defamation, with the protest movement rocking the kingdom put on hold because of a spike in coronavirus cases.

A total of 41 people have now been charged with insulting the monarchy in a major uptick in Thailand’s use of its strict lese majeste laws since a youth-led protest movement began last July.

The charges can carry a 15-year jail sentence, but the threat of prosecution has not deterred protesters from demanding reform to the monarchy and greater scrutiny of its finances.

Police questioned the four today and released them, according to Thai Lawyers for Human Rights.

Three, including a 17-year-old, were charged over a protest at Wongwienyai, across the river from Bangkok early in December.

In a separate case, a student was charged for allegedly printing the pro-democracy movement’s 10 demands as well as transcripts of speeches by protest leaders at an August rally.

All four have pleaded not guilty.

Government spokesman Anucha Burapachaisri said people were free to protest in a way that was “constructive and beneficial for society”, but not to insult others or “incite hatred”.

Protests demanding political reform and the resignation of Prime Minister Prayut Chan-O-Cha were halted over the Christmas-New Year period and are likely to remain on hold while Thailand grapples with a surge in coronavirus cases.

An outbreak at a seafood market in December has spread the virus to more than 50 provinces and increased the total cases to more than 10,000 -- from just 4,000 in November.

Protest leader, Parit ‘Penguin’ Chiwarak, who is facing a dozen royal defamation charges, said the fight for democratic reform will continue in 2021 “but with the covid situation, gathering may not be the main theme”.

Political analyst Paul Chambers of Naresuan University said the 41 cases marked the biggest use of the royal defamation laws since 2017, when when 64 people were either facing charges or already in jail under the previous king’s reign.

“At this point, the authorities are being temporarily saved by the growing ravages of Covid-19 in Thailand. Authorities are using this period to make numerous arrests of protest leaders so that any future demonstrations will lack these key individuals,” he told AFP.

Chulalongkorn University political scientist Thitinan Pongsudhirak said the recent cases in such a short a time “show an unprecedented escalation of legal persecution”.

“The apparent aim is to keep the protest leaders on the back foot and the movement off balance because lese majeste has a high conviction rate with loose parameters where anyone can charge anyone,” he told AFP. — AFP

These were the details of the news Thai royal defamation cases ramp up as protests pause for this day. We hope that we have succeeded by giving you the full details and information. To follow all our news, you can subscribe to the alerts system or to one of our different systems to provide you with all that is new.