3 Billboards, the panels of revenge (France 2) Why did Frances McDormand first refuse to make this film? 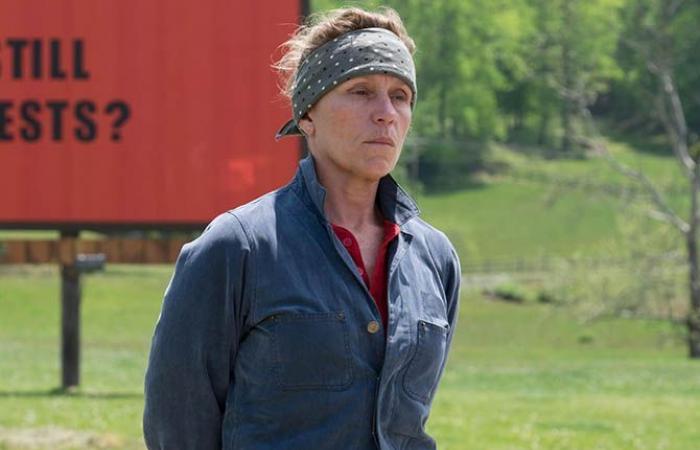 Ebbing, town of Missouri. This lost hole has not changed much since its construction by the pioneers: a main artery, a bar, a few shops, a gas station and a police station, where the sheriff, Bill Willoughby (Woody Harrelson), is severely depressed. This cop, a sturdy 6’8 ” macho with cowboy manners, is humiliated by Mildred Hayes, a little bit of a woman. Outraged that the local police had not resolved the investigation into the rape and murder of her daughter, a few months after the tragedy, this revolted mother rented, for 5,000 dollars, three huge billboards, planted in the fields located at the entrance to their city. We can read there: “Raped during her agony”, “Still no arrest!” And “Why, Chief Willoughby?” “A disastrous advertisement, which the local authorities would have gladly done without …

In 2015, the British director Martin McDonagh (Good kisses from Bruges, in 2008) wrote the screenplay for this drama thinking of an actress he secretly worships: Frances McDormand. He was impressed with his portrayal of pregnant policewoman Marge Gunderson on the hunt for killers in the cult thriller Fargo, by brothers Joel and Ethan Coen, released in 1996. A breathtaking performance, which won her the Oscar for Best Actress, in 1997. But, when he offered her the role of the vengeful mother, the director wiped out a scathing refusal. Reason: Frances McDormand, artist with a strong character, and married, since 1984, to Joel Coen, of whom she is the favorite actress (Ave, César !, Burn After Reading), knows quite well in cinema. She finds the scenario not very credible. “Why are you making me a mother when I’m 60? Give me the role of a grandmother instead!“, she blurted dryly, to a pale Martin McDonagh. But the director, native Irish, is also a strong head: no question of touching his script. It is therefore Joel Coen who will decide : “One morning he came up to me and just said, ‘You are making the movie.’ So i accepted“, summarizes, with her own humor, Frances McDormand.

Filming begins in May 2016 in North Carolina. Adopted daughter of a Canadian pastor, whom she accompanied during sermons in deep America, McDormand is at ease in the middle of the corn fields which extend as far as the eye can see: “All the decor of my childhood” On the set, the director discovers, in admiration, the professionalism of an extremely conscientious actress: standing at 5 o’clock, she arrives at the same time as the cinematographer, to assist with the adjustment of the light. As for her makeup and hairstyle, she is keen to do them herself. And, when Woody Harrelson, amazed by her personality, asks her who are the actors who have influenced her, Frances McDormand answers: “John Wayne. A tough guy, but he had guts and guts.“A bit like her …

These were the details of the news 3 Billboards, the panels of revenge (France 2) Why did Frances McDormand first refuse to make this film? for this day. We hope that we have succeeded by giving you the full details and information. To follow all our news, you can subscribe to the alerts system or to one of our different systems to provide you with all that is new.