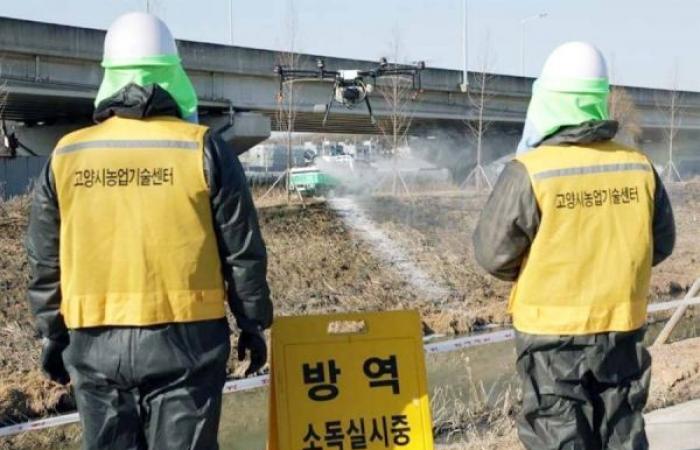 We show you our most important and recent visitors news details S. Korea confirms 48th case of highly pathogenic bird flu in the following article

The latest case of the malign HN58 strain of bird flu came from a duck farm in Yeongam, 384 kilometers south of Seoul, according to the Ministry of Agriculture, Food and Rural Affairs.

South Korea issued a standstill order on all poultry farms in the region for seven days.

Authorities have been looking into a separate case from Muan, 385 kilometers south of Seoul, as well. Both places are in South Jeolla Province.

Later in the day, another suspected case was reported from an egg farm in Gimpo, west of Seoul. Test results will come out in one to three days, officials said.

The first local infection from farms was found in late November after a hiatus of nearly three years. By region, Gyeonggi Province surrounding Seoul accounted for 13, while South Jeolla Provinces took up 11.

The country has completed culling of 14.9 million poultry as of Friday. Birds within a 3-kilometer radius of infected farms are destroyed.

The number of infections from wild birds also continued to pile up, sparking further concerns over the further spread of the virus here.

Authorities have identified 60 cases of highly pathogenic avian influenza cases from wild birds since October. The caseload is anticipated to continue grow down the road as more migratory birds are expected to fly into South Korea over the winter. — SPA

These were the details of the news S. Korea confirms 48th case of highly pathogenic bird flu for this day. We hope that we have succeeded by giving you the full details and information. To follow all our news, you can subscribe to the alerts system or to one of our different systems to provide you with all that is new.

NEXT Bolsonaro backers push for change to Brazil’s voting system