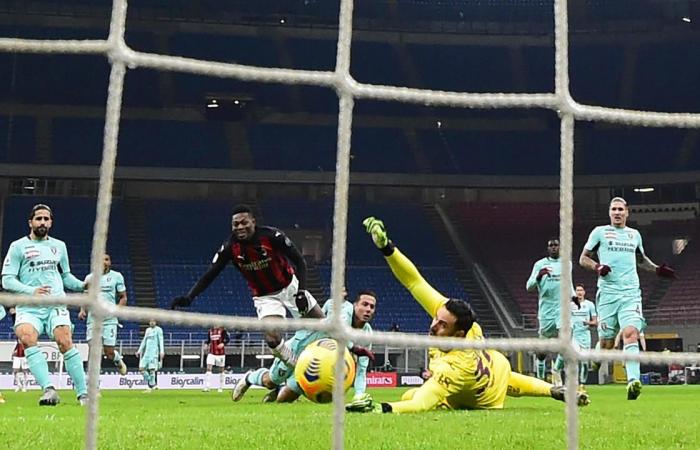 AC Milan, three days after its first defeat in the league against Juventus (1-3), moved forward against Torino (2-0) on Saturday at San Siro, with the added bonus of Zlatan Ibrahimovic .

“Ibra”, absent for seven weeks after two injuries in quick succession, entered for a handful of minutes late in the game, without having a real opportunity to sign the return with a goal.

The score was then already acquired in favor of the Rossoneri, guaranteed to remain at the top of the championship at the end of the 17th day of Serie A, spread until Monday.

Before setting foot on the pitch again, it was as an active spectator, giving voice, that the Swede witnessed Milan’s first perfect period from the bench.

Theo Hernandez, who had been turned off by Federico Chiesa against Juve, had regained his legs. Multiplying the incursions, the French was at the origin of the opening of the scoring with a full axis breakthrough which opened a breach from which Rafael Leao took advantage, after a stint from Brahim Diaz (25th).

Diaz, on loan from Real Madrid, in turn displayed his sense of percussion to provoke the Turin defense and get a penalty on a foul, reported by VAR, Andrea Belotti. Franck Kessié (36th) without trembling transformed his fourth penalty of the season (six goals in total).

The rest was a little more complicated for the leader, saved by the crossbar just before the break (free kick from Rodriguez, 43rd) then by the VAR which canceled a penalty awarded to Torino (50th). Midfielder Sandro Tonali was injured in this contentious action, leaving to join an already busy infirmary in Milan.

Despite this second more convincing period, Torino plunges back into the red zone (19th) after Genoa’s victory in the afternoon over Bologna (2-0).

Atalanta Bergamo (4th, 31 pts) also won Saturday on the field of Benevento (4-1) thanks to a Josip Ilicic of the great days, author of the first goal and involved in three of the four achievements of his team.

The Slovenian has taken over the “Dea” since the dismissal in December of the playmaker and captain Alejandro “Papu” Gomez, in cold with the coach Gian Piero Gasperini.

With his touch of the ball regained and the success of Colombians Duvan Zapata and Luis Muriel, Atalanta returned to the start of the year with its offensive firepower. She remains in seven games unbeaten (with more than three goals per game on average).

“It’s really a good time for us, we have regained confidence in our game, the ability to play it for 90 minutes and also enthusiasm,” said Gian Piero Gasperini.

These were the details of the news Italy: AC Milan regain victory and “Ibra” for this day. We hope that we have succeeded by giving you the full details and information. To follow all our news, you can subscribe to the alerts system or to one of our different systems to provide you with all that is new.