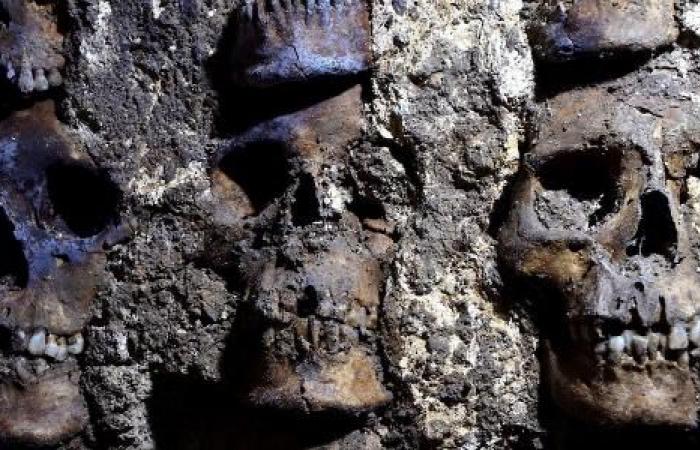 Archaeological excavations in Mexico City have uncovered the outer façade and east face of the tzompantli, the tower of human skulls erected during the Aztec empire, officials said on Friday.

This is the second discovery on the tzompantli, 4.7 meters in diameter, after in August 2015 the structure was located in the archaeological works where the Greater Temple of the Greater Tenochtiltán, the city of the Aztecs, today center of the Mexican capital, stood. .

“In the east section of the tower, 119 human skulls were superficially seen, in addition to the 484 previously identified”, highlights a statement from the Secretary of Culture and the Institute of Anthropology.

The discovery of this structure, which is estimated to have been built between 1486 and 1502, corresponds to reports about it made by Spanish conquistadors, such as Hernán Cortés and Bernardo Díaz del Castillo.

The “tzompantli is undoubtedly one of the most striking archaeological discoveries in recent years in our country, as it is an important testament to the power and greatness that has reached Mexico-Tenochtitlan”, highlighted the secretary of Culture, Alejandra Frausto.

The skulls mostly correspond to men, but female bones and at least three of children on this east face have also been identified.

According to experts cited in the statement, tzompantli is “a building of life rather than death”, since in Mesoamerica the sacrifice of human beings was a way of keeping gods alive and continuing their existence.

But they admit that it was also “a declaration of power and warlike principles”, as it is believed that some skulls were of enemy warriors and that the tzompantli was shown to opponents of the Aztec empire as a form of warning.

The structure was erected in honor of Huitzilopochtli, the greatest Aztec deity.

Grande Tenochtitlán was founded around 1325 by the Aztecs, who dominated several pre-Hispanic settlements until in 1521 they fell before the Spanish conquistadors, who destroyed most of the last stage in the construction of the skull wall.

For decades, the historic center has been rich in archaeological discoveries, such as the majestic carved stone of the goddess Coyolxauhqui, discovered in 1978, when workers installed underground cables.

Underneath the Metropolitan Cathedral are remnants of the Greater Temple and the Mesoamerican ball game court. On a flank, the visitor can walk through part of these traces.

These were the details of the news New stretch of tzompantli, Aztec tower of human skulls found in... for this day. We hope that we have succeeded by giving you the full details and information. To follow all our news, you can subscribe to the alerts system or to one of our different systems to provide you with all that is new.