Geomagnetic storm warning: the Sun launches an explosion of electromagnetic energy towards Earth 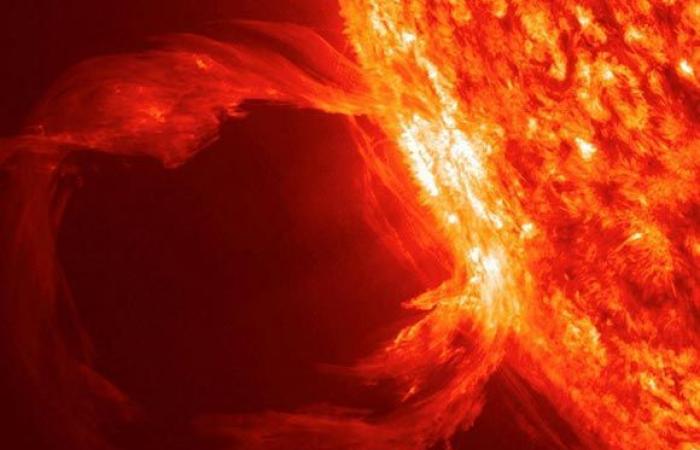 An impressive solar flare and coronal mass ejection (CME) on December 7 threw plasma and electromagnetic energy toward Earth. If your favorite radio station is playing static or your GPS drifts a few feet, it’s not just another by-product of a crazy year. Incoming solar weather can actually cause communication disruptions such as GPS positioning errors and interference within our electrical grid.

After several months of pause, the Sun has awakened in a new period of solar activity. Some of the Sun’s energy would reach our atmosphere on Wednesday night and Thursday, a reason for stargazers to look up into the night sky in anticipation of the bright and colorful northern lights. A spectacular display of the Northern Lights would be possible on Wednesday night as far south as Pennsylvania and Oregon, with possible disruptions in communications.

Geomagnetic storm watches are in effect from December 9-11, 2020 due to anticipated CME effects. The CME occurred on December 7 and was associated with a C7 flare from Region 2790. Analysis suggests that the arrival of the CME is possible late December 9, which initially resulted in G1 (Minor) storm levels. As the effects of the CME continue, the activity is likely to increase, especially if the magnetic field carried by the CME connects well with the Earth’s magnetosphere. Therefore, there is the possibility of strong storm levels and a G3 (Strong) Watch is in effect for December 10.

CME-related disturbances are forecast to continue through December 11, likely resulting in G2 (moderate) storm levels, and another watch has been issued accordingly. While the SWPC forecasters are fairly confident in the arrival of CMEs on Earth, the timing and intensity of the geomagnetic storm are less certain. Please continue to monitor our SWPC website for the latest conditions and forecast.

Origin: The Sun launches an explosion of electromagnetic energy towards Earth

These were the details of the news Geomagnetic storm warning: the Sun launches an explosion of electromagnetic energy towards Earth for this day. We hope that we have succeeded by giving you the full details and information. To follow all our news, you can subscribe to the alerts system or to one of our different systems to provide you with all that is new.