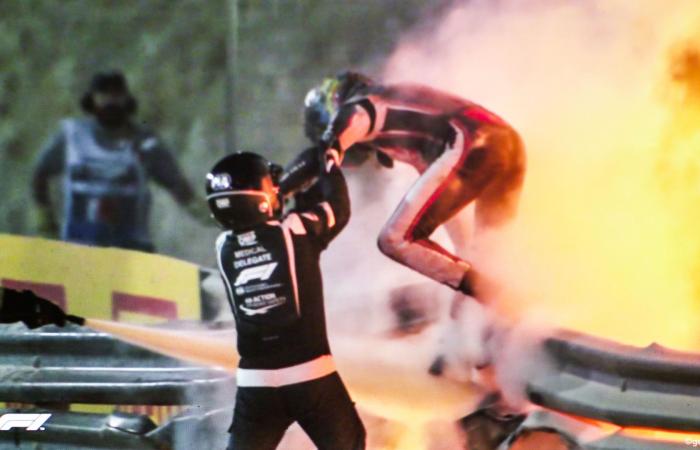 The Bahrain Formula 1 Grand Prix was startled by a heavy crash by Romain Grosjean (34) just after the start. The French driver hit a guardrail with his Haas, his car turned into a fireball, but he managed to escape miraculously.

Immediately after the start, things went wrong in Bahrain. After the first corner, Grosjean tried to advance along the right side of the road, but collided with Kvijat and was catapulted into a crash barrier.

Grosjean shot off the track at high speed and landed head-on against the boarding. In addition, Grosjean’s car immediately caught fire and the car also broke in half.

The Frenchman was able to quickly leave his car and the conflagration with the help of the emergency services on the track.

Grosjean has been taken to hospital for minor burns

Images showed how Grosjean was taken to the pit lane. He was then transported to the medical center for further checkups and treatment of his burns.

“He is conscious and got away well with minor burns to his hands and ankles,” said Haas team principal Steiner. The halo may have saved Grosjean’s life. He was in the burning car for about 15 to 20 seconds.

“Of course Romain is a bit in shock. I want to thank everyone all the emergency services and everyone who helped Romain. It was terrifying, but everyone did a fantastic job.”

Photos of the crash:

These were the details of the news Formula 1 driver Romain Grosjean escapes death after horror crash |... for this day. We hope that we have succeeded by giving you the full details and information. To follow all our news, you can subscribe to the alerts system or to one of our different systems to provide you with all that is new.