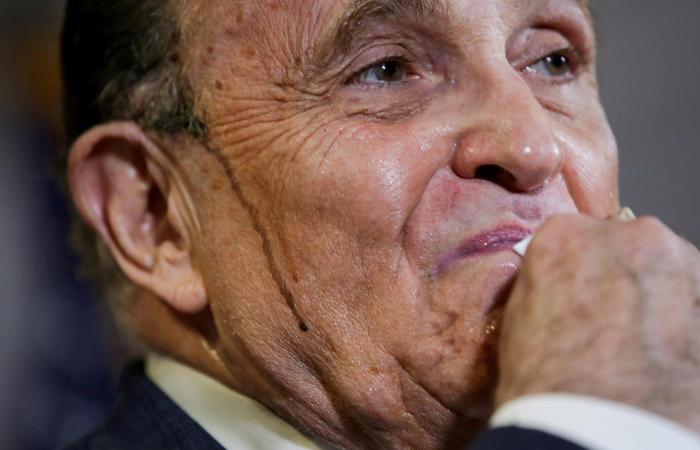 The world mocks Rudy Giuliani – and overlooks what the Trump attorney is doing. The US president could highly reward him for his fight against reality.

After returning from vacation, I was promptly faced with the same dilemma as Donald Trump in Washington. And Trump, I’m afraid, made a better decision than me.

It was Wednesday morning and the question for both of us was: Go to Rudy’s or not?

Rudy Giuliani, who has been Trump’s personal lawyer for two and a half years, has become the main character and the joke of the great performance to challenge the US election. You will have seen some episodes of the farce: How he talked himself so furiously at a press conference while distorting reality that the hair dye ran down his cheeks with the sweat.

Or how Trump announced a big press conference at the luxury hotel Four Seasons in Philadelphia, but Giuliani then held court in the industrial area in the parking lot of the nursery Four Seasons Total Landscaping between the adult bookstore and the crematorium.

These appearances are symbols of how absurd the play is that is supposed to present the loser Trump as the winner. In court, the 76-year-old Rudy Giuliani, the once revered New York mayor, meanwhile collects gossip after gossip.

Rudy, the joke character. A hit for America’s late-night comedians or for jokes in Germany. However, I see him as more than a joke. He tells us something crucial about the situation in America.

And that’s why I finally went to see him on Wednesday morning. It went to Gettysburg in southern Pennsylvania, where one of the bloodiest and decisive battles of the Civil War was once fought. 157 years later, Rudy Giuliani wanted to campaign against the alleged electoral fraud there.

Announced as an event by the Pennsylvania Senate, the date turned out to be a meeting of Republicans loyal to Trump in a hotel.

Trump himself even wanted to appear there at Giuliani’s side. It would have been his first real trip since the election defeat. It had been planned in secrecy and was only canceled at the last minute. Because the news burst in that an employee who worked closely with Giuliani was sick with Covid.

I only found out about it when I was already there. I had also hesitated with the trip – on the one hand because of Corona, which is still treated like a dizziness of the left at events in Trump orbit. And also because Giuliani’s circus is a bit too stupid for me with its increasingly crazy theories, in good German. But sometimes you just have to go where it hurts.

In Gettysburg in front of the hotel I found this scene: two hundred demonstrators, Trump flags, a man in a bathrobe had a Biden cardboard picture drawn in front of his face and a large poster: Where am I? Sure, the confused are always the other.

The battle cries were “God Bless Trump!” and “Stop the Steal!” (the supposed theft of choice), the microphone turned around, there was screaming and crying. One woman said she had an inspiration that Jesus Christ would descend to Philadelphia over the weekend, right where Rudy claims to have spotted the Democrats’ biggest electoral fraud.

In other words, it was the usual Trump craze.

It was fired again from inside, where Giuliani was applauded and cheered as he marched into the ballroom and then threw around with numbers and accusations. I don’t want to go into detail, just emphasize that there is still no evidence of fraud that would have influenced the outcome of the election.

He presented a dozen or so witnesses who claimed to have seen strange things at polling stations – if only he had brought them to court, where he had crashed in Pennsylvania over the weekend with his objections to the election result. Here, in the parallel world, he repeatedly earned applause and laughter. In between he said: “I know about crooks.”

There was laughter, but not at him.

The appearance was not one that caused ridicule and headlines worldwide, but it was all the more important: It was the crystallization of Rudy Giuliani’s hustle and bustle as a tireless fog machine. He does not want to reveal anything, but to cast doubt. Giuliani and Trump know that they have no chance of changing results in court. That is not the goal either.

The goal is to instill the stab in the back legend in the followers. If individual points are refuted, nothing is lost, because there are always enough other supposed inconsistencies buzzing through the room. That is Giuliani’s method. Throw everything, something will stick.

He is instrumental in ensuring that the alleged election theft is now stored as one of the great conspiracy theories in the memories of many Americans: Kennedy assassination, moon landing, election 2020.

A majority of Republicans believe that the election was not done with right things. It is the biggest mortgage that election winner Joe Biden will take into office: a large part of the country will never recognize him as the rightful president.

Giuliani has long been Trump’s fog bomb man. The whole Ukraine affair and impeachment would not have happened without him. It was Giuliani who left no stone unturned in branding Biden as corrupt through his son’s business in Ukraine. This is how he now goes about the election. Removed ballots in Pittsburgh, smuggled into Philadelphia, votes of dead citizens in Detroit. Dark interests in Venezuela and a company in Frankfurt am Main should also be involved.

Are you interested in US politics? Washington correspondent Fabian Reinbold writes a newsletter about his work in the White House and his impressions from the US under Donald Trump. Here you can subscribe to the “Post from Washington” free of charge, which then lands directly in your mailbox once a week.

Giuliani and Trump, both born in New York in the 1940s, are cut from the same cloth. Rudy Like Trump, he is not masterful, but shameless.

He let a Russian spy whisper alleged revelations about Biden. During the evening appearances on Fox News, in the run-up to which he does not always renounce the consumption of alcohol, he talks about head and neck from the point of view of many, but the Trump bubble sees a hero who is fearlessly up against everyone. In this world you will be rewarded if you don’t let trivialities such as shame or the truth slow you down when you attack your opponent.

For me, the story of Rudy Giuliani is not so much the fall of a former American hero, but an expression of the brutalization of morals in the political public that rewards shamelessness. The main thing is that it pops.

At the end of the performance in Gettysburg, which, due to the coronavirus, I preferred to follow the stream outside in the parking lot, Giuliani’s colleague then held her phone to the microphone – Trump himself was on the line.

The telephone joker, connected directly from the Oval Office, whispered once again that he had clearly won the election. Before he hung up after ten minutes, he wanted to pay tribute to another man: Rudy.

He praised him four times as the greatest mayor New York has ever had. Then Trump said: “But this will be your brilliant achievement because you are saving our country.”

It should not surprise us when Trump pardons Giuliani – now because of the Ukraine affair in the sights of the Manhattan public prosecutor he once headed – as a precautionary measure during the last few meters in office. Or simply award him with the President’s Medal of Freedom, the highest civilian honor in the United States. Trump knows what he owes him.

These were the details of the news Donald Trump’s eager assistant Rudy Giuliani has turned into a joke for this day. We hope that we have succeeded by giving you the full details and information. To follow all our news, you can subscribe to the alerts system or to one of our different systems to provide you with all that is new.