Donald Trump is losing support: More and more Republicans are turning away 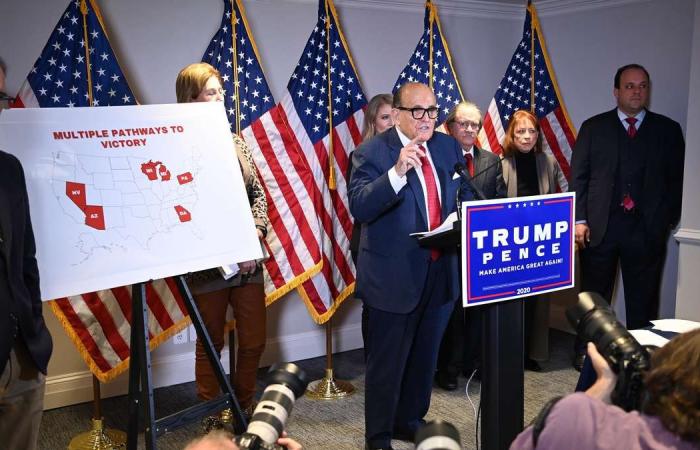 With their lawsuits and attempts to overturn the outcome of the 2020 US election, Donald Trump and his legal department are increasingly encountering resistance within their own party.

Washington DC – Loyal supporters are still fencing within Donald Trump the result of US election 2020 on – and the allegations too supposed Election fraud are getting more dubious every day.

But in large parts of the USA and among many members of the Republican Party Trump and his legal department often encounter silent opposition. That Joe Biden as the winner of the US election and next US president emerges, many will have already accepted.

2020 US election: More and more Republicans are turning away from Donald Trump

At the latest at the press conference of Rudy Giuliani and Sidney Powell on Thursday (November 19, 2020) many should Republicans It will have become clear that the legal department’s allegations are around Donald Trump have reached a peak of absurdity. The US election had been manipulated with money from a bloc of communist countries, including Venezuela, by installing certain algorithms on voting computers that impair the result. That’s what Trump’s attorney Sidney Powell said.

A former legal representative on the Republican National Committee, Mark Braden, still believes it to Election fraud came, but he thinks the statements are insane. “Look – election fraud happens,” he told the news site “The Hill”. “I’ve seen it. It happens. But you have to be realistic about the size and extent. ”The fact that Venezuela interfered with the voting computers is“ one hundred percent nonsense, ”says Braden. “I don’t know what’s going on here. It is very dangerous that we undermine the system. ”

republican like Mitt Romney had long been criticized Donald Trump and his utterances practiced. But even allies of the US President, such as Senator Joni Ernst and Senator Tom Cotton, distance themselves from the theories. It is not the time for press conferences, but for evidence and trials, said Cotton. Ernst was outraged by Powell’s claims that candidates from both parties had transferred money to the manufacturers of the voting computers in order to influence the outcome. The allegations are “absolutely monstrous”.

Trump’s allegations of electoral fraud are met with increasing skepticism, mainly because no one has yet been able to produce solid evidence. Trump-Loyalist Tucker Carlson of “Fox News” said on Thursday evening (November 19th, 2020) that attorney Sidney Powell turned down an invitation to his show in order to defend her assumptions. “She never sent us any evidence,” said Carlson, “despite many polite requests,” to which Powell even responded angrily.

A Reuters-Ipsos poll shows that around half of Republicans believe Donald Trump would have “legitimately won” the election. This number will continue to decline in the coming weeks, as Republican local politicians are slowly giving in. The Republican-led board of directors in Maricopa County, Arizona, won the Democrats’ victory Joe Biden now confirmed. The chairman had declared that no electoral fraud and misconduct could have been found, reports the Washington Post. Brian Kemp, the Republican governor of Georgia, has also announced that the Biden victory will be official. He refuses to approve of Trump’s assertions about electoral fraud.

US election 2020: Republicans with “silent resistance” against Donald Trump

Overall, however, a large proportion of Republicans are silent – they are faced with a dilemma. If you contradict Donald Trump’s claims, you will quickly find yourself in the crosshairs of the President and his loyal fans. However, speak of them unmolested Election fraud and a legitimate victory for the incumbent, they lose credibility. In either case, that could damage your political career. Therefore, some make only dilute or very vague assertions about the integrity of the US election to defend it, but at the same time not to annoy the president too much.

Donald Trump and his campaign, meanwhile, put considerable pressure on the “swing states” in which he lost. In Pennsylvania For example, Team Trump asked a judge to declare him the winner, even though he lost the state by 82,000 votes. In Michigan Republicans refuse to support Trump’s coup. Mike Shirkey, majority leader in the Michigan Senate, had announced that it would not come to that.

These were the details of the news Donald Trump is losing support: More and more Republicans are turning away for this day. We hope that we have succeeded by giving you the full details and information. To follow all our news, you can subscribe to the alerts system or to one of our different systems to provide you with all that is new.