Parler: What’s behind the controversial platform for Trump fans 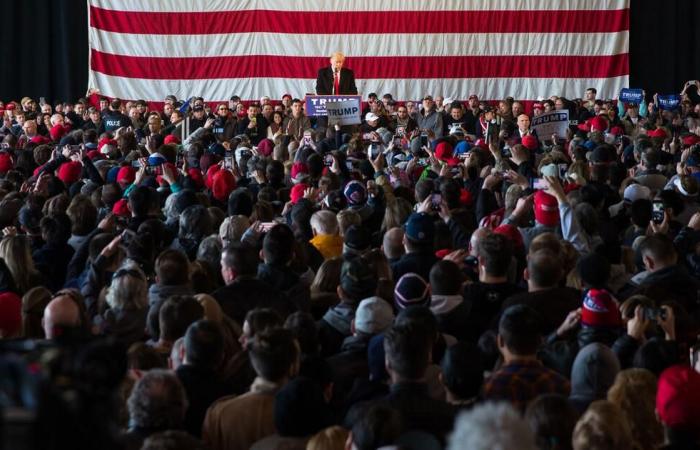 More about the 2020 US election

The “threatened free speech“must absolutely be maintained and”the truth“Stay alive: A few seconds after logging on Talk sends this message to Joe Pags. The man is a radio and TV presenter in the USA, including the conservative Fox News.

Pags highlights what this is network himself writes on the flags: Parler is a “non-biased social medium with free expression”, it says in the description in the app stores at Google and Apple. On the website, users are asked to “speak freely“and” being open about what you think “without fear of being thrown off the platform, which is a nod to Facebook and Twitter.

The two large networks have increasingly taken action against untruths in recent months. Facebook, for example, deleted groups around the Conspiracy Theory Movement QAnon. Twitter marked tweets of still-President Donald Trump as Misinformation – for example, when the latter claimed that the Democrats had carried out election fraud, for which there is no evidence to this day. Partially Clear the portals content by users or them lock their accounts.

That doesn’t happen at Parler. The name refers to the freedom of speech: “Parler” is French and means “to speak”. Here should be similar to the Telegram Messenger everyone can write anything – and that’s what the platform is like dangerous power: Lies, conspiracy theories and hate speech can be spread here unhindered. Hardly anything is deleted and there is no fact checks.

Parler has only two rules: In its “Community Guidelines”, the app prohibits the distribution of criminal content, pornography and Calls to violence. Also Spam is not allowed. Everything else is no problem.

The app becomes the point of contact for Right-wing conservatives, Right-wing extremists, Trump-Fans, Conspirators and Holocaust deniers. All in all five million active members has she. Compared to Facebook with 2.7 billion and Twitter with 330 million members, this is still very little.

However, Parler is currently experiencing one rapid upswing: The app was the one for several days most loaded application in the US app stores. Four and a half million users registered within five days after the election victory of Democrat Joe Biden. Parler co-founder John Matze reported this on the Parler website and also provided an explanation: Facebook and Twitter had suppressed election information and were unfair.

What users can do at Parler and what they write about

Users can interact with Parler in a similar way to Twitter, but with more space: instead of 240 1,000 characters possible. Posts are called “Parley”, retweets are “echoes”. Posts will be chronologically displayed. On Twitter and Facebook, an algorithm decides what can be seen in the timeline.

Members share links, pictures and videos, comment on posts, like them and follow others. Hashtags can also be assigned. Is currently popular (Tuesday morning) about #stopthesteal with more than 180,000 posts on alleged election fraud of the Democrats.

Under hashtags like #covidhoax Members claim the corona pandemic does not exist. There are hardly any votes against, supporters of these theses stay among themselves.

Incidentally, the platform has not yet worked smoothly. It’s slow and crashes frequently. And she is, despite the ban, flooded with Nude pictures.

Among the members are apparently some people from the close environment of the still-president. A profile should Trump-Sohn Eric who wants to use Parler to “lead the fight for his father, my family and our country”.

Even the White House press secretary, Kayleigh McEnany, and the Republicans loyal to Trump Rand Paul, Ted Cruz and Rudy Giuliani can be found at Parler. Trump himself does not yet have a profile.

Behind Parler is a powerful Trump supporter

The network has existed since the middle 2018. It was founded by the two conservative programmers John Matze and Jared Thomson in Nevada – with active support from arch-conservative circles, including Twitter users

So let’s talk about Parler. Where did it come from? Founder John Matze met his now wife, Alina Mukhutdinova, in May 15, 2016 in Las Vegas. Alina is from Kazan, Russia. She was on a two week road trip “vacation” across the USA with a friend.

has analyzed. According to his own statement, Troy is a “disinformation researcher”, so he intensively investigates false information.

Is the main investor Rebekah Mercer, Parler founder Matze has now confirmed that. The influential lobbyist and her family financed, among other things, Trump, the right-wing radical news site “Breitbart” and organizations that deny climate change.

Besides, Mercer was Cambridge Analytica President. The data analysis institute caused a scandal during the 2016 election campaign because it had collected data from Facebook users and then tried to find out their To influence voting behavior. The actually media-shy Mercer also has a profile at Parler herself.

Donald Trump has been voted out of office – even if he doesn’t want to recognize it himself. In his remaining time in the White House, the outgoing US president could still cause damage.

These were the details of the news Parler: What’s behind the controversial platform for Trump fans for this day. We hope that we have succeeded by giving you the full details and information. To follow all our news, you can subscribe to the alerts system or to one of our different systems to provide you with all that is new.