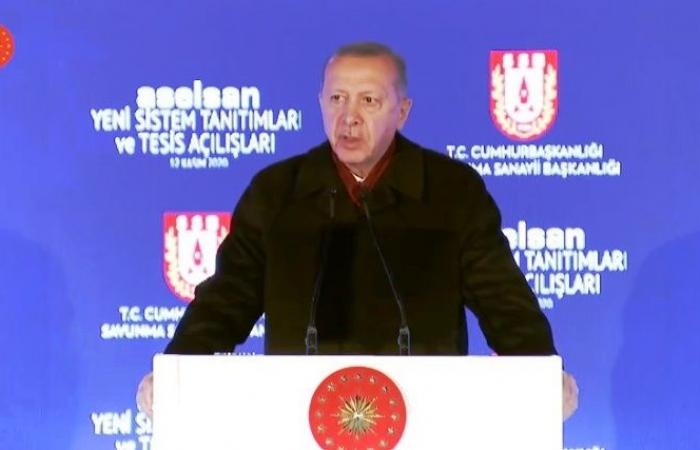 Turkish President Recep Tayyip Erdogan announced, on Thursday, the readiness of advanced local systems to be used in electronic warfare.

In a speech during his participation in a ceremony introducing the new systems in the capital, Ankara, Erdogan said that the developed “Karagulak” system entered service within the Turkish armed forces.

He explained that the “Karakulak” system of eavesdropping and jamming of high frequencies would give Turkey great power in electronic wars.

The Turkish president added that the new low-altitude air defense systems, “Korkut”, had been delivered to the armed forces.

He indicated that the system is effective against targets such as aircraft and helicopters, in addition to air-to-ground missiles, cruise missiles and marches.

He pointed out that Turkey had implemented 61 defense projects in 2002, and that the number today has reached nearly 700 projects.

He explained that there are 7 Turkish defense companies in the list of the first 100 global companies, indicating that 5 of them entered the list in the last five years.

Erdogan said that Turkey had launched about 350 projects in the last five years only for an effective struggle against the attacks facing the country, noting that his government had raised the budget for defense industries projects to 60 billion dollars.

He noted that exports of the defense and aviation sectors reached 3 billion dollars, after it was 248 million.

He indicated that Turkey now meets its needs and the needs of friendly and allied countries in terms of land and sea vehicles.

He added, “We are among the ten countries that are capable of designing and building warships, and among the first three or four countries in the production of armed and attack drones.”

He stated that Turkey today owes the progress achieved in the field of defense industries in terms of its capabilities to implement counter-terrorism operations inside the country with ease, and peace operations outside the borders.

He pointed out that Canada imposed a ban on cameras used in some drones because of the support provided by Ankara to Baku, pointing out that Turkey had produced similar ones, saying, “We have integrated them (cameras) into our marches and continued our path, and we were not satisfied with that, but we started a project in order to make a better one. “.

He indicated that Turkey has become a strong country that overcomes the challenges and the overt and covert embargoes imposed by global suppliers.

He stressed the necessity for all public and private institutions that contribute to the development of the defense industries in Turkey to work within close and sincere cooperation with regard to the depth of research, development and productivity.

These were the details of the news Erdogan announces advanced Turkish systems for electronic warfare for this day. We hope that we have succeeded by giving you the full details and information. To follow all our news, you can subscribe to the alerts system or to one of our different systems to provide you with all that is new.