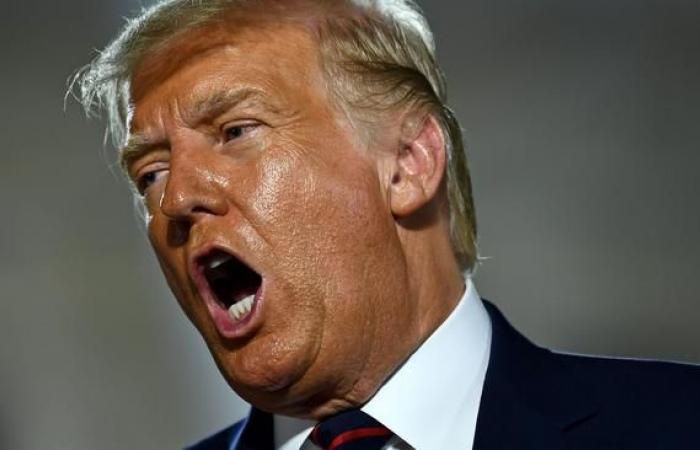 It was finally confirmed over the weekend that Mr Trump had lost the November 3rd election, trailing opponent Joe Biden with more than 4.4 million votes, and receiving just 214 electoral college votes, compared to Mr Biden’s 290 votes.

To win a U.S. election, a candidate must get the deciding 270 electoral college votes to claim victory, and while three states – Alaska, Georgia, and North Carolina – haven’t counted, it wouldn’t make a difference even if they did Mr Trump in the end would win all three.

However, this has not stopped the outgoing president from making unfounded allegations of election fraud and refusing to admit defeat.

The unprecedented situation was taken up by leaders of the American enemies, who took the opportunity to beat up the nation and Mr. Trump.

In the wake of the ongoing drama, Iranian Supreme Leader Ali Khamenei retweeted part of a speech he delivered last week calling the country’s electoral system a “spectacle” and claiming it marked the nation’s “decline”.

“The situation in the US and what they say about their elections is a spectacle!” He posted.

“This is an example of the ugly face of liberal democracy in the US.

“Regardless of the outcome, one thing is absolutely clear: the final political, civil and moral decline of the US regime.”

According to Reuters, Iranian Vice President Eshaq Jahangiri also put the shoe in.

“I hope we will see a change in the destructive politics of the United States, a return to the rule of law and international obligations and respect for nations,” he said, according to local media reports.

In China, which had a close relationship with the Trump administration that resulted in a harmful and prolonged trade war, the state media responded to Mr Trump’s refusal to admit defeat by laughing in the leader’s face.

On Saturday, Mr Trump incorrectly tweeted that he had “WON A LOT OF THIS ELECTION”.

RELATED: First Thing Biden Will Do As President

Global times Targeting the outgoing president and the American electoral system, reporter Hu Xijin wrote, “The US political system is in decline,” saying, “If Trump plays delaying tactics or leaves the White House after not accepting the election result , is the split in US society will deepen or even consolidate significantly. ”

It was similar in Russia: The leader of the Communist Party, Gennady Zyuganov, made fun of the “extreme” situation and warned of possible anarchy, while the state media featured a number of guests who opposed the US have prevailed.

“The limits of madness are limitless,” said political scientist Andranik Migranyan, according to CBC on the state broadcaster NTV. “Each of the candidates accuses the other of stealing votes. This shows the deep crisis in the USA. ”

The Mayoress of Paris, Anne Hidalgo, also made a subtle dig at Mr. Trump’s expense and wrote on Twitter: “Welcome back to America! Congratulations to @JoeBiden and @KamalaHarris on their choice! As we approach the 5th anniversary of the Paris Agreement, this victory symbolizes our need to work together more than ever in the face of the climate emergency. ”

The president clashed with French head of state Emmanuel Macron ahead of the 2019 NATO summit and described his statements against the organization as “very, very angry”.

So far, some Republicans have backed Mr Trump as he tries to hold on to power, despite many – including former President George W. Bush – insisting that the elections were “fair.”

Some members of Mr Trump’s own family, including Ms. Melania and son-in-law Jared Kushner, have also reportedly urged him to privately admit defeat.

Mr. Biden’s victory made history after breaking former President Barack Obama’s record for the most votes ever cast for a presidential candidate.

These were the details of the news Iran, Russia, China mock Donald Trump’s election loss for this day. We hope that we have succeeded by giving you the full details and information. To follow all our news, you can subscribe to the alerts system or to one of our different systems to provide you with all that is new.