Ford Mustang Mach-E: The Evolution of an Icon 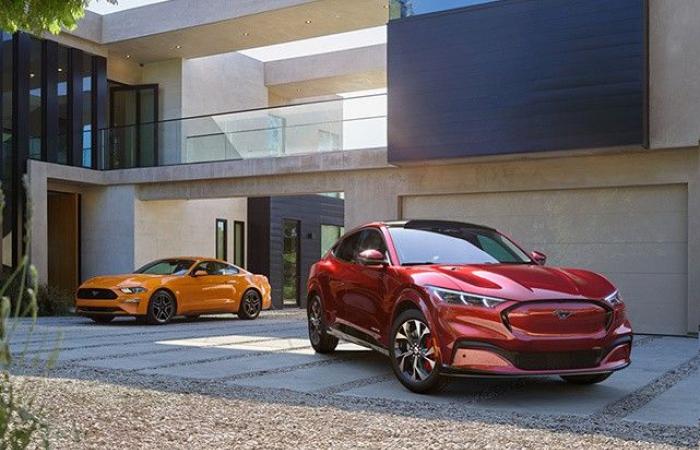 When launched in 1965, the first generation Mustang was positioned as a fun, fast and affordable car, characterized by a long front hood and a short rear platform. In the mid-1970s, with the oil crisis, its second generation adopted more modest proportions and offered more efficient engines in terms of fuel consumption. Its style evolves with the decades, but its ardor remains eternal, immortalized by legendary models like the Shelby GT 350 and GT500, Mach 1 and Bullitt.

Since the arrival of the sixth generation in 2005, the Mustang remains the best-selling sports car in the world1. Its design is inspired by features popular with other eras, reinterpreted in the modern era. The brand’s indomitable attitude is reflected in small attentions, such as the mention Ground Speed (ground speed) on the odometer.

A 100% electric SUV in the Mustang team

How to explain the surprising addition of an SUV aspiring to zero emission certification alongside the legendary muscle car ? Because the Mustang stallion cannot be trapped in a bodywork. “We realized that Mustang drivers and high-performance electric SUV enthusiasts have a lot in common – they’re rebels hungry for freedom and thrill,” said Jason Castriota, Brand Director for Mach-E.

Above all, this new model perfectly represents the Mustang spirit. With its slender silhouette, muscular curves and exhilarating driving experience, the Mustang Mach-E is the epitome of fun, speed and freedom. (fun, fast, freedom) ”, He continues.

From the outset, the design team wanted to honor the proportions so characteristic of Mustang. Impossible to be indifferent to the massive nose of the vehicle, with its long hood. The fluid roof design, which has a color distinct from that of the bodywork, creates an ingenious trompe-l’oeil. “This element gives the Mustang Mach-E the silhouette of a coupe when, in reality, the interior is much larger than it looks,” says Jason Castriota.

Although the SUV platform offers an elevated driving position, once behind the wheel, the proportions and markings remain the same as in a Mustang car. The rear seat is however much more spacious in the Mach-E, capable of accommodating three adults. “People are always surprised to see our Director of Engineering, a 6’7” man, sit comfortably in the back! Says Jason Castriota. The dashboard houses a massive 15.5 ” touchscreen that brings together all the infotainment technologies and vehicle preferences.

Release up to 480 horsepower

To experience the euphoria of the track, the GT Performance Edition model delivers feats worthy of 55 years of history. “Our GT model can compete with virtually any other stallion in our team, going from 0 to 100 km / h in less than 4 seconds2 », Explains Jason Castriota. Its powerful 480 horsepower engine with 634 lb-ft of torque, combined with a very low center of gravity platform, delivers a thrilling ride on the road. “It shows that electric vehicles are not just used to save gasoline,” concludes the brand director.

2 Based on preliminary testing by Ford.

*The article has been translated based on the content of Source link by https://www.lapresse.ca/xtra/2020-11-07/ford-mustang/mustang-mach-e-de-ford-l-evolution-d-une-icone.php
. If there is any problem regarding the content, copyright, please leave a report below the article. We will try to process as quickly as possible to protect the rights of the author. Thank you very much!

These were the details of the news Ford Mustang Mach-E: The Evolution of an Icon for this day. We hope that we have succeeded by giving you the full details and information. To follow all our news, you can subscribe to the alerts system or to one of our different systems to provide you with all that is new.