A fringe of the Republican Party is distancing itself 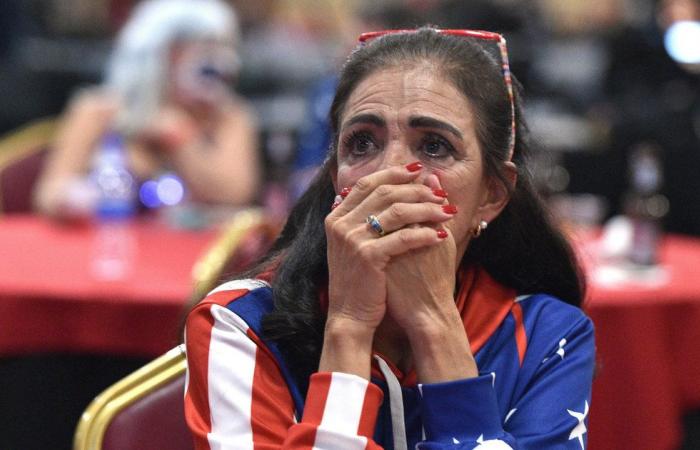 Thursday evening, in the United States (middle of the night in Europe): Donald Trump has just slammed the door of the briefing room of the White House. It leaves Americans dumbfounded once again. Even on the sets of Fox News, the American channel closest to the outgoing president, it is difficult to follow. It floats like a little air of disbelief.

For a little over a quarter of an hour, Donald Trump has just aligned the accusations against “the corrupt system”, against these “illegal votes” which seek to “steal the victory” from him. “We were winning and, miraculously (for the Democrats), the numbers suddenly started to melt,” he said, referring to the count of the postal votes, which gradually tipped the scales on the Democratic side. According to Donald Trump, the fraud machine is working at full speed: “They first want to see how many votes they need. And then they manage to find them. ”

Back to Fox News where, after going around in circles and paraphrasing as much as possible the president, star host Bret Baier has to take the plunge, there is no “hard evidence” that would confirm the president’s claims , he finally concedes. The massive fraud put forward by Donald Trump does not correspond to any established fact.

This embarrassment visible on Fox News is a reflection of a larger malaise that is beginning to seize part of the Republican camp. As Donald Trump’s speech escalates – flanked by his close guard and his family – the choice thus becomes more and more clear for the leaders of the Grand Old Party: should they follow the rantings of their leader ? Or should we on the contrary defend, against him, the American institutions that he threatens?

For those who were already critical of Donald Trump’s slippages, the case is heard: this dangerous speech “undermines the foundations of our nation”, summarized for example the member of the House of Representatives Will Hurd. Texan, African American, Hurd, it is true, did not stand for re-election on November 3. For him, the task is therefore much easier.

But he is not alone: ​​from former presidential candidate Mitt Romney (Utah), to ex-New Jersey governor Chris Christie (yet close to Trump), several Republican heavyweights have thus put their legitimacy in the scales to attack the methods of the outgoing president. “This is all getting crazy,” said Adam Kinzinger, a newly re-elected Illinois representative, on Twitter.

Faced with this Republican fringe in open rebellion against the outgoing president, members of the Trump clan are trying to sound the call to order. Between two messages qualifying as “idiots” those who believe in a rise to the regular Joe Biden, Donald Jr., the eldest son of the president, attacked the “lack of action” of the Republican personalities to defend their camp. Implied: they lack courage. “You lack the backbone,” continued Eric Trump, the president’s other adult son. Fight against fraud! Our constituents will never forgive you for being sheep. ”

While some 68 million voters voted in favor of Donald Trump, these injunctions from the president’s family sound like threats with veiled sentences. To come out of the woods today, and to oppose Donald Trump’s ramblings, is to run the risk of paying this affront later, within a party white-hot by this election.

An example: after appearing a little hesitant, South Carolina Senator Lindsey Graham announced that he was donating half a million dollars to the fund set up by Donald Trump to finance his multiple appeals to challenge the election results with the courts. An initiative that was immediately warmly welcomed by Eric Trump as well as by a host of personalities close to the president.

Part of the plot

If this battle launched by Donald Trump to contest the results makes Republicans uncomfortable, this is particularly the case in states such as Arizona or Pennsylvania, where Joseph Biden’s comeback has been spectacular. So much so that the Republican Governor of Arizona, Doug Ducey, was forced to dot the i’s so as not to appear as a member of the alleged “plot” against Trump. “In Arizona, we count the votes received up to election day. That’s all. Let’s count the votes, and let people decide, rather than making statements, ”he exclaimed.

To seem innocuous, this profession of faith did not meet less with the ire of Donald Trump. Before the movement of discomfiture seemed to be accelerating for him in other states, the outgoing president had done everything to avoid conceding a possible defeat in Arizona.

According to the American press, Donald Trump would have called the owner of the Fox group, Rupert Murdoch, to “yell at him” after Fox News had assured that Joe Biden had won this state. Murdoch would not have wanted to hear anything, and Fox News was forced to publicly explain its decision to announce Joe Biden the winner. “I’m sorry, we are not wrong,” Arnon Mishkin, an official of the channel, explained on the air. A channel on which Donald Trump has not intervened since then and which has not been the subject of any of his tweets.

*The article has been translated based on the content of Source link by https://www.letemps.ch/monde/une-frange-parti-republicain-prend-distances
. If there is any problem regarding the content, copyright, please leave a report below the article. We will try to process as quickly as possible to protect the rights of the author. Thank you very much!

These were the details of the news A fringe of the Republican Party is distancing itself for this day. We hope that we have succeeded by giving you the full details and information. To follow all our news, you can subscribe to the alerts system or to one of our different systems to provide you with all that is new.