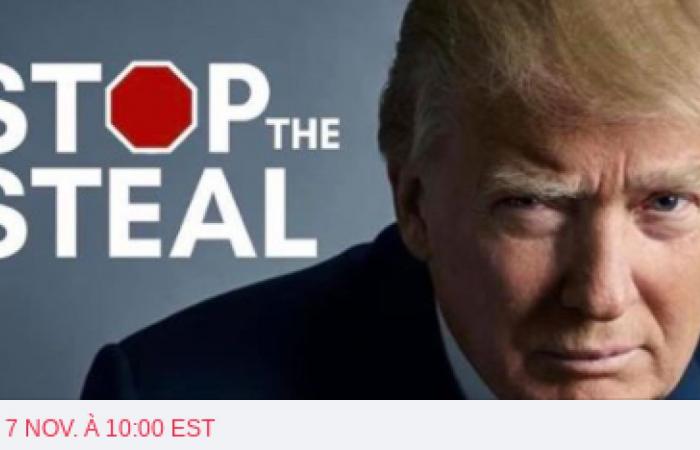 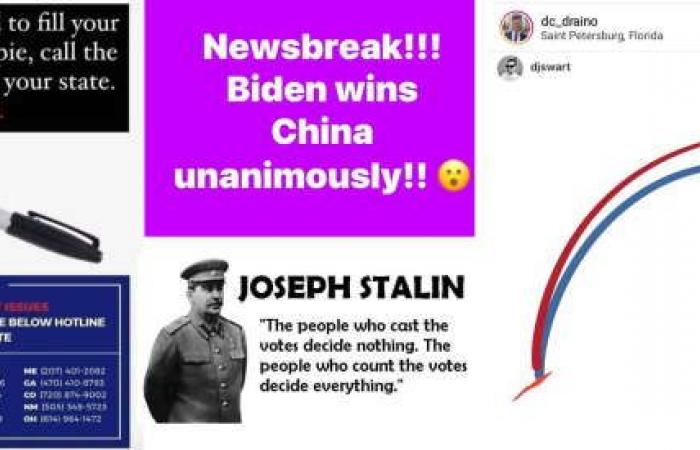 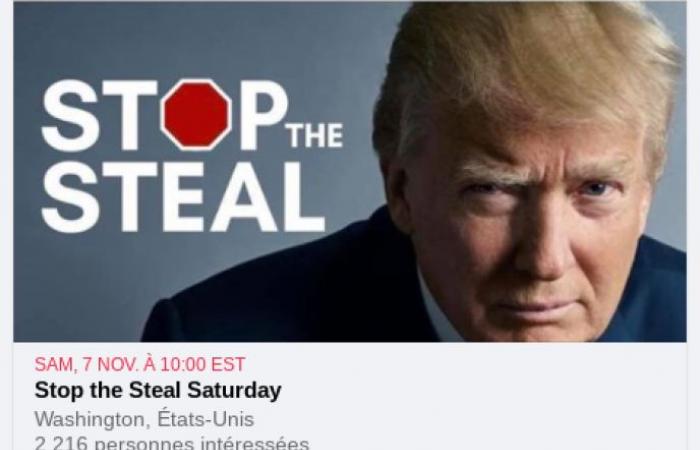 In this American Facebook group, created the day after the election, thousands of messages had been posted, commenting on the results of the vote in the United States and denouncing more or less baroque frauds which would have been mounted for the benefit of the Democratic Party and the candidate Joe Biden. These messages were based on the line worn by current President Donald Trump, who claimed to have won the presidential election on the night of the vote, and whose campaign team has filed legal appeals in some states where Joe Biden has been given the winner.

Resolutely conspiratorial, the mood in the Facebook group was fueled by images carrying simple messages, worrying about America and wishing Trump victory. Unsourced videos were supposed to demonstrate the existence of a plot against the candidate for re-election, and they also shared many links to various sites from the right to the right, or supposed to prove that ballots for candidate Trump were destroyed. Some spoke of the fact that the pandemic linked to the coronavirus would be a creation of Joe Biden and his supporters. Fox News, considered too leftist channel since attributing Arizona to Joe Biden, was not welcome

Based on our findings, many messages posted in this group were in violation of Facebook’s many usual moderation rules (especially those related to the 2020 elections, which are supposed to reduce disinformation about the ballot).

“In keeping with the exceptional measures we are taking during this period of great tension, we have removed the“ Stop the Steal ”group which was creating real events. The group was organized around the delegitimization of the electoral process, and we saw disturbing calls for violence there ”,

Facebook statement: “In line with the exceptional measures that we are taking during this period of heightened tension, we have removed the Group 'Stop the Steal,' which was creating real-world events...

Republican executives at the maneuver

If it seemed, at first glance, to be the work of ordinary American citizens convinced that the presidential election was eluding them, this group was in reality piloted by structured networks very close to the Republican Party. . As the news site noted Mother Jones, the site for collecting contact information for “Stop the Steal” supporters was registered in the name of a communications consultancy and website creation company that has many conservative organizations and candidates among its clients. She has worked on several anti-Biden and pro-Trump websites in recent months.

The main administrator of the group was the page “Women for America First”, a right-wing organization of the same name from the Tea Party movement which recently mobilized for the confirmation of the ultra-conservative judge Amy Coney Barrett to the Supreme Court. A few months ago, as noted again Mother Jones, this group, which has been working since 2010 with many Republican politicians, had demonstrated against the impeachment procedure opened against Donald Trump. Other directors of the group were from the Tea Party.

In addition, another of the directors of “Stop The Steal” is part of a communications consulting firm close to the Republicans which has been posting on social networks, for weeks, its support for Donald Trump. Added to the group on November 5, he has posted selfies in recent hours from the Oval Office of the White House. Another administrator is the founder of a social media communication and consulting start-up who, on his Twitter account with more than 280,000 subscribers, relays a lot of false information on the count of votes. Several of his posts have been partially obscured, for this reason, by Twitter in recent days.

Demonstration projects in all disputed states

This Facebook group is only one of the many initiatives launched, in dispersed order, by several republican and populist figures to try to influence the end of the count. Many “Influencers” Republicans have scrambled since the November 3 vote to mount protests in major cities in states where the outcome is still disputed. In Arizona, where Joe Biden’s advance waned during the night of November 4 to 5 in France, the organization Turning Point Action, founded by activist Charlie Kirk (850,000 subscribers on Facebook, 1.8 million on Twitter), and organized a demonstration on Friday directly in front of the Phoenix counting center.

Turning Point Action, sister association of influential Turning Point USA, has absorbed several pro-Trump organizations in recent years, including Students for Trump. In mid-September, it was at the center of a major controversy, after revelations from the American press showing that the organization had mounted a disinformation operation: it was indeed paying young Americans to publish, on the networks. social, anti-democratic messages.

Other demonstrations are also planned in Pennsylvania, where the conservative influencer Scott Presler (850,000 Twitter followers, 150,000 on Facebook) asks his supporters to go to the steps of the state capitol in Harrisburg. “Bring your Stop the Steal signs, and be prepared to stay as long as possible”,

Bring “Stop The Steal” signs & be prepared to stay as long as possible.

. Conspiracyist, pro-Trump gay figure, Mr. Presler stood out in 2017 by organizing “Marches against Sharia law” in which members of the Proud Boys group and figures of the white supremacist movement participated.

In Michigan, the main call to protest comes from Brandon Straka, creator of a large Facebook group, “Walkaway Campaign” (500,000 members), which presents itself as a center for “Repentant democrats” moved to the conservative side. The group, which is also linked to an association of the same name, has been repeatedly suspected of using unfair methods to artificially “inflate” its membership – including with automated tools suspected of being linked to. Russian propaganda operations.

It is a common point of all these organizations which call, two days after the vote, to demonstrate in the disputed American States: the suspicions «D’astroturfing», the practice of making people believe that a movement is active, and led by ordinary citizens, when it is in fact managed by an organized campaign or a small number of people. So far, the “Stop the Steal” protests have apparently not gathered crowds – but that could change as the results come in, and the unproven accusations of fraud. massive continue to be brandished by the Republican staff, and by Donald Trump.

Article reserved for our subscribers Read also US elections 2020: Trumpism proves its resilience

These were the details of the news 300,000-member pro-Trump Facebook group shut down for spreading false information for this day. We hope that we have succeeded by giving you the full details and information. To follow all our news, you can subscribe to the alerts system or to one of our different systems to provide you with all that is new.