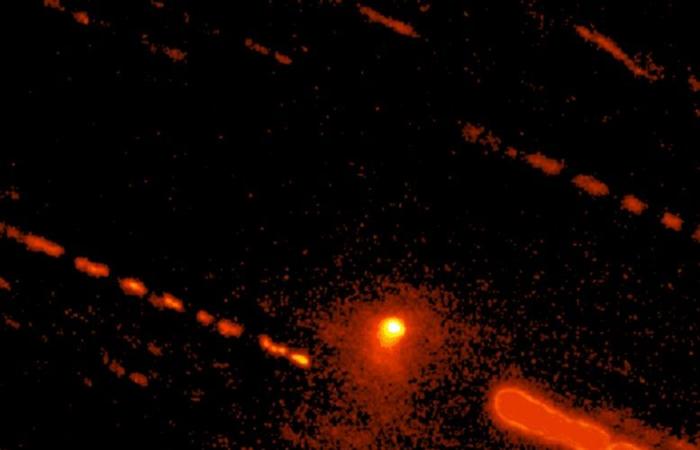 This new image from C / 2014 OG392 (PANSTARRS) and its extensive coma combine many digital images into a single exposure of 7,700 seconds. The dashed lines are star trails caused by the long exposure. The images were taken on October 14, 2020 with the Large Monolithic Imager on the 4.3 m long Lowell Discovery Telescope. Photo credit: Courtesy of Northern Arizona University

Centaurs are minor planets believed to have formed in the Kuiper Belt of the outer solar system. They sometimes have comet-like features like tails and comas – clouds of dust particles and gas – even though they orbit in a region in between Jupiter and Neptune where it is too cold for water to sublime or pass directly from a solid to a gas.

Only 18 active centaurs have been discovered since 1927 and much is still poorly understood about them. Detecting activity on centaurs is also an observational challenge as they are weak, time consuming, and rare.

The team’s research included developing a database search algorithm to locate archive images of the centaur, as well as an observation campaign.

“Our article reports on the discovery of activity emanating from Centaur 2014 OG392 based on archival images that we uncovered, as well as our own new observational evidence obtained with the Dark Energy Camera at the Inter-American Observatory in Cerro Tololo, Chile, by Walter Baade Telescope at Las Campanas Observatory in Chile and the large monolithic imager at the Discovery Channel Telescope at Lowell Observatory in Happy Jack, Ariz., ”Said Chandler.

“We discovered a coma up to 400,000 km from OG392 in 2014. Our analysis of the sublimation processes and dynamic lifespan suggests that carbon dioxide and / or ammonia are the most likely candidates for the activity of this and other active centaurs. We have developed a novel technique that enables observational measurements, e.g. B. Color and dust mass, combined with modeling efforts to estimate properties such as the volatile sublimation and orbital dynamics of the object. ”

As a result of the team’s discovery, the centaur was recently classified as a comet and is referred to as “C / 2014 OG392 (PANSTARRS)”.

“I am very pleased that the Minor Planet Center has given a new comet name to reflect the activity we have discovered on this unusual object,” he said.

This week, Chandler was invited to present the results at the 52nd Division of Planetary Sciences (DPS) of the American Astronomical Society (AAS) 2020 meeting.

Chandler’s research is supported by Grant No. 2018258765 funded by the National Science Foundation’s Graduate Research Fellowship Program (GRFP), a highly competitive opportunity only about 2,000 students receive each year.

These were the details of the news Astronomers discover activity on distant centaur planetary objects for this day. We hope that we have succeeded by giving you the full details and information. To follow all our news, you can subscribe to the alerts system or to one of our different systems to provide you with all that is new.