USA Elections 2020: Biden is favorite, but Trump has a chance... 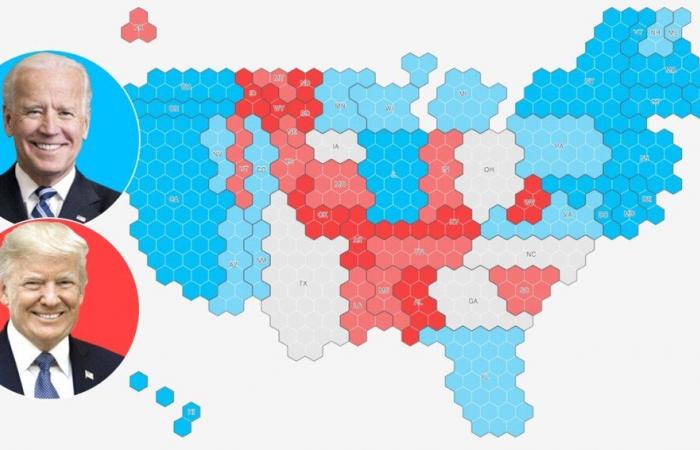 The prognosis that is being updated by EL PAÍS points to Joe Biden as the big favorite. The predictions give the Democrat an 85% chance of victory, compared to 15% of Donald Trump. These are the keys to understanding the main data.

Trump’s options are lower than he had in 2016, when he imposed himself by surprise. Four years ago, Hillary Clinton had a 3.8 percentage point advantage in the polls, which fell to just two points and the candidate lost the election. Can this event repeat itself? Sure. But it would be an even bigger surprise: Biden’s advantage is double, almost nine points. In addition, the number of undecided has been reduced. At the time, 12% had not decided to vote for Clinton or Trump, but now they are only 5%.

Below, an image of the evolution of the polls, in percentage of votes, since April, based on the FiveThirtyEight forecast model.

On the eve of the 2016 election, FiveThirtyEight polls they gave Trump a 29% chance of victory, a percentage now reduced to 10%. It is something to be read subtly: it means that another Republican victory would be an even bigger surprise – three times more rare – but still a possibility. It may happen.

A 10% or 15% probability event is not at all impossible. If you wake up one morning without knowing what day it is, the chance of being a Monday is as likely as a Trump victory. These are numbers similar to a penalty: if you are a Democratic voter, you should feel like the pitcher (hopeful, but afraid) and if you are a Republican, like the goalkeeper (it is not easy, but you are not lost). This uncertainty is unpleasant, but that is the nature of the choice.

In addition, not all predictions reach consensus. To predict EL PAÍS, four sources were combined: two models based on research, the predictions of a group of experts and the betting market. The research models are the most decisive: they say that Biden has a 90% and even a 95% chance of winning. The group of experts is more cautious, its predictions coincide with the average and give the Democrat an 85% chance.

In the image, evolution of the average of the research on the prognosis of EL PAÍS.

The most divergent prediction is that of betting. From the fixed prices, it appears that Trump would have a choice of three to be re-elected as president (36%). There are many more – for bets, in fact, Trump’s victory would not be a surprise. The gambling market is very attentive to the 2016 result and distrusts research. The same was true in the 2017 French presidential election. Polls at the time said that Marine Le Pen had little chance of winning, but it had only been a few months since the victories of Brexit and Trump, and many people thought the polls weren’t picking up the populist vote. At the time, the bets were wrong and the research was accurate.

But where are Trump’s options? There are several key states that can change hands or are representative. If a result could be predicted, it would be better to ask about Wisconsin. If Biden wins there, his chances of becoming president rise to 19 out of 20, according to the statistical model of FiveThirtyEight. But if Trump surprises and takes this state, he would become the favorite with five options out of six. Something similar happens with Pennsylvania, Michigan, Minnesota or Nevada.

Trump’s victory involves generating a big surprise – which, by definition, cannot be helped – or following a narrow path. He needs Florida first, almost out of obligation, where he is a few points behind Biden. Then, he must guarantee victory where he is the leader – Texas, Iowa, Ohio – and prevail in disputed territories, with Georgia and North Carolina. Once there, to complete this sum there are two alternatives: repeat the path of 2016 and win some states of the industrial belt (Pennsylvania, Michigan, Wisconsin, Minnesota) or surprise in the west (Arizona, Nevada, New Mexico, Colorado). Neither way is easy, so the favorite is Biden – he doesn’t need anything special to happen.

Biden is favorite to get the majority of the 538 delegates

Beware of simplified reporting. On Wednesday there will be a definite result and we will see small changes in the electorate to explain it: we will read (and write) that the suburbs have changed color, that Pennsylvania has become Democratic, or that whites who have not gone to college have voted for Trump again. . But you must remember that many things will not change. The vast majority of those who voted for Trump will vote for him again. We know from research. If only 90% of those who voted for him repeat the vote, the Republican will likely lose the presidency, but most of his voters will still be there. Americans did not completely change their mind when they voted for Trump to replace Barack Obama, but neither will they now, even if they choose Biden. Countries did not turn upside down overnight.

Biden or Trump: who is winning the elections?

These were the details of the news USA Elections 2020: Biden is favorite, but Trump has a chance... for this day. We hope that we have succeeded by giving you the full details and information. To follow all our news, you can subscribe to the alerts system or to one of our different systems to provide you with all that is new.