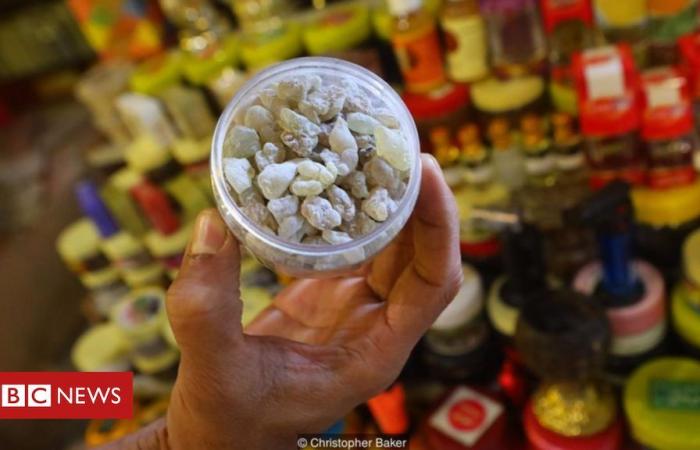 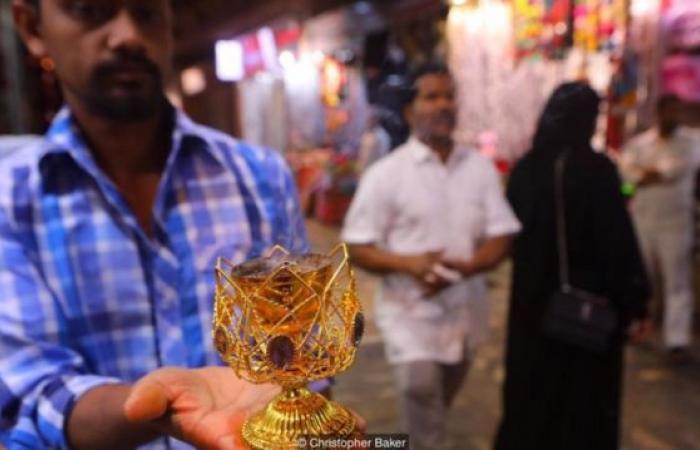 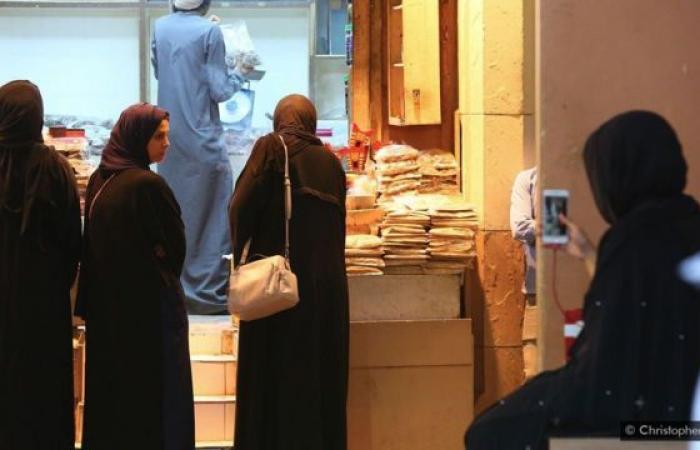 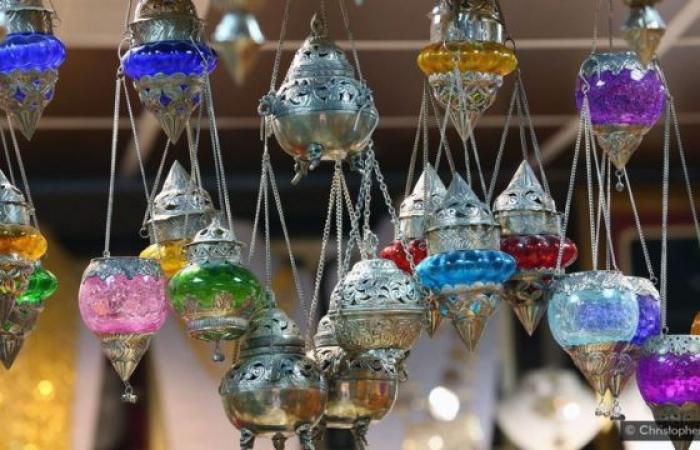 As I plunged down the alleys of the traditional souq (market) of Mutrah, in Muscat, capital of the Oman, the smell of incense got stronger.

A seductively musky aroma permeates the country’s cities and culture, and at any moment I can smell that characteristic smell hovering in the air.

I was attracted by the hypnotic scent of incense burning slowly outside the stores in vases adorned with gold and silver censers. The outdoor stalls were filled with spices, mountains of dates and piles of myrrh.

Women of abaya (long and loose tunic) black looked at the colorful silk scarves, while the men dressed in white tunics and kuma (traditional hat) gave a look in the mountains of frankincense nuggets, aromatic resin also known as frankincense, which means “pure incense “.

O souq de Mutrah is one of the few places in the world where you can buy gold, myrrh and frankincense, the three gifts offered by the Three Wise Men to the baby Jesus, according to Christian belief. They were the most precious gifts that anyone could have given 2000 years ago, when the frankincense was worth its weight in gold.

Used for 6,000 years as a perfume and panacea, frankincense is an aromatic resin harvested from trees of the genus Boswellia, which grow only in a narrow climate range that extends from the region known as the Horn of Africa to India and parts of southern China.

Most of the global frankincense supply comes from Somalia, Eritrea and Yemen, countries that have been plagued by conflict in recent years, which has had a negative impact on incense production.

But peaceful Oman produces the most refined and expensive frankincense in the world, a substance that the ancient Egyptians called “the sweat of the gods”. And the stubborn tree Boswellia sacra thrives in the harsh terrain of Dhofar province, in the south of the country.

The frankincense resin value is determined by its color, size and oil concentration. The most valuable type, known as hojari, comes from a narrow belt of dry microclimate in the Dhofar Mountains, out of reach of the summer monsoons that cover the tip of the Arabian Peninsula.

Today, this region is part of what is known as the Incense Route in Oman, declared a World Heritage Site by UNESCO.

“The olibado trade that flourished in this region for many centuries [foi] one of the most important commercial activities in the ancient and medieval world “, says the description of Unesco.

From here, caravans with thousands of camels and slaves laden with incense set out on a hard 2,000 km journey through the Arabian desert, destined for the Egyptian, Babylonian, Greek and Roman empires. Meanwhile, ships were transporting the resin to more distant ports, such as China.

Roman philosopher Pliny the Elder (23-79 AD) wrote that his trade had made southern Arabs “the richest people on earth”.

Cure for all ills

Known as aspirin, penicillin and viagra at the time, olibado was considered an effective remedy for everything from hemorrhoids to menstrual cramps and melanomas.

Greek military doctor Pedânio Dioscórides described incense as a wonderful drug and said that the resin gum could “fill the ulcer cavity” or “close bloody wounds”.

Papyrus Ebers, the most important medical treatise in Ancient Egypt, mentions incense as a treatment for asthma, hemorrhage, throat infections and vomiting, among other things.

The Egyptians imported large quantities to use also as a perfume, insect repellent and to mask the odor of putrefaction by embalming the bodies. An frankincense ointment was found in the tomb of Pharaoh Tutankhamen, when it was discovered in 1922.

The incense was burned during purification ceremonies, which suggested a divine aspect. Its swirls of smoke were believed to ascend directly to the sky. For this reason, many temples in the ancient world were impregnated with their fragrance.

“We burn frankincense to repel snakes,” says local guide Amur bin Hamad al-Hosni as he takes me through the Ad Dakhiliyah region of northern Oman to the 17th century Nizwa fortress.

“And to keep the djinn (evil spirits), “adds Maitha Al-Zahraa Nasser Al Hosni, a seller at the fortress’s souvenir shop, which smelled of incense.

During my stay in Oman, I was surprised to see how frankincense remains an integral part of the local culture. In the city of Nizwa, I saw men chewing the edible resin like gum to freshen their breath.

“Pregnant women also chew,” a merchant told me, explaining that future mothers believe that the properties of the resin guarantee the birth of an intelligent baby.

It is also used in medicines and teas to aid digestion and leave skin healthy. Residents perfume their houses with frankincense to repel mosquitoes, and burning incense after a meal is considered a sign of hospitality.

The type of frankincense used is seen as a status symbol and a sign of respect. “Omanis swear that the white tears of Jabal Samhan or Hasik are the best,” says Trygve Harris, owner of Enfleurage, one of Oman’s incense distilleries, referring to frankincense harvested in the south of the country, on the coast east of Dhofar.

“It is considered purer, it is the most appreciated aroma. But my favorite is the black frankincense from the cliffs of Al Fazayah, west of Salalah”, she adds, while showing me a room full of old copper stills, in which she extracts the complex and delicate resin essential oil.

Different types of soil, microclimates and even harvest times produce resins of different colors. Generally, the whiter the resin, the more valuable it is.

In the summer, Harris even makes frankincense ice cream, which the locals eagerly consume in the tent she rents on souq of Muscat.

High demand is a threat

Harris went to Oman for the first time in 2006 to buy frankincense for his aromatic essential oil store in New York.

“But even in Oman, I could only find oil from Somalia, not oil from Oman, of high quality,” he recalls.

“Nobody distilled it to sell at that time. Not even Amouage!”, Adds Harris, referring to the main perfume company in Oman, specializing in the production of luxury frankincense fragrances.

In 2011, she moved to Salalah, capital of Dhofar, and opened the Enfleurage. Today, established in the capital of Oman, Harris sells to small international perfumeries, essential oil companies and “people who want high quality refined frankincense and do not need 1,000 kg”.

Virtually all Oman frankincense is harvested from trees Boswellia holy who grow up freely in the scorching Dhofar desert and belong to the local tribes.

Harvesting begins in April, when rising temperatures make the sap flow more easily. The workers make small incisions in the bark of the tree, releasing a milky white sap that runs down the stem like candle wax.

The sap is left to rest for ten days until it solidifies into a gum. After the “tears” are shaved, farmers cut the same spot again. They repeat this process several times, with the final autumn harvest producing the most pale and valuable resin.

After about five years, this process is stopped, and the tree is not touched for the next five years.

However, in recent years, the rare trees Boswellia sacra, in Oman, they were threatened by rising global demand.

A Boswellia sacra it is now on the international list of species “almost threatened” with extinction, and a recent study published in the scientific journal Nature states that the tree is dying so quickly that frankincense production will decrease by 50% in the next 20 years.

Another report warns that production has already dropped from an average of 10 kg per tree to just 3.3 kg, and shows that the population of Boswellia sacra at the Jabal Samhan Nature Reserve in Dhofar, it has decreased by 85% in the past two decades.

Scientists point to drought, overgrazing, insect attacks and illicit harvesting by armed Somali smugglers as reasons for the resin’s decline, which has prompted the Sultan of Oman to send armed guards to protect the region’s valleys in recent years. years.

However, according to the project manager of the Oman Environmental Society, Mohsin Al Amri, unsustainable harvesting is the biggest threat to the species.

Smaller trees that have not yet matured are being cut, while adult trees are suffering from over harvesting to meet growing demand. In addition, fewer seedlings Boswellia are surviving.

I would never say that judging by the mountains of frankincense nuggets sold in the stalls of the souq of Mutrah, separated and priced according to their color and origin.

The maze of alleys and alleys in the market ended up taking me for a walk along the Corniche waterfront, which is in the Mutrah area, and curves along the coast of the Arabian Sea. The traditional dhows (Arab vessels) floated in the bay surrounded by the mountains. And the air, of course, was filled with the unmistakable fragrance of Oman’s unmistakable scent.

These were the details of the news Incense that was worth more than gold and was once considered... for this day. We hope that we have succeeded by giving you the full details and information. To follow all our news, you can subscribe to the alerts system or to one of our different systems to provide you with all that is new.