Trump is on the verge of losing … he throws his... 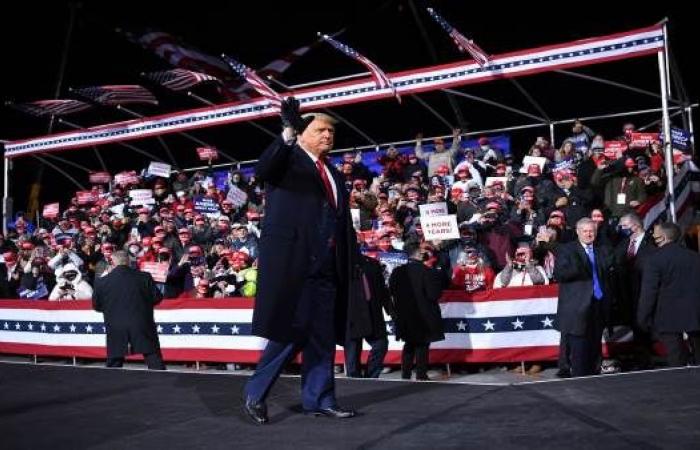 US President Donald Trump said the nation stands at a crossroads as Election Day approaches. Trump was speaking on Saturday night near the site where George Washington set up his headquarters before crossing the Delaware River.

Trump considered that these elections, scheduled for Tuesday, November 3, are likely to be a very important event. He said, “This state will save the American dream” within three days. He expected to win in Pennsylvania.

Trump, who narrowly won in Pennsylvania in 2016, organized four events across the state on Saturday, aiming to keep her on his side. Without this mandate, his path to garnering 270 electoral votes will be much more difficult.

For his part, the Democratic candidate, Joe Biden, focused on Michigan, which remains his main target, while he seeks to rebuild the “Blue Wall”, states traditionally settled in favor of the Democrats, to the “rust belt” states, a term given to the region on both sides of the northeastern United States. The upper hand, including Wisconsin and Pennsylvania, which previously favored Obama but won for Trump in 2016.

Two days before the elections, opinion polls still showed a democratic candidate’s lead over the current president by about 7 percentage points at the national level. But the poll numbers remain a non-final indicator of the final outcome, as presidential elections in the states are not determined by the popular vote but by the electoral college votes.

All but two of the most sparsely populated states award all of their electoral votes to the winner of the popular vote in that state. A candidate needs to win 270 votes out of the 538 total votes in the electoral college.

As usual, there are pre-settled states in favor of a two-party candidate, with the exception of about 12 states known as swing states, and the final outcome is often determined.

Biden is slightly ahead in swing states, but Trump nevertheless hopes to replicate his 2016 victory by securing electoral college votes in swing states like Pennsylvania, Michigan and Wisconsin, which he won in 2016 by very slim margins.

Robert Griffin, a research director for a group specializing in studying voters in the United States, told the Voice of America website that Trump is still showing his strength and not losing by far in swing states in the Midwest and nationally as well.

Three major issues are likely to play a prominent role in Trump retaining the presidency for a second term, or otherwise with Biden winning. According to research centers and observers, the three issues are, the Corona pandemic, the economic situation, and protests against racism that the country has recently witnessed.

With the country surpassing 9 million coronavirus cases and 229,000 deaths, opinion polls show that the majority of Americans do not agree with Trump’s handling of the pandemic.

On the economic front, Trump speaks with confidence about his previous and current achievements in this area as well, after data from the US Department of Commerce this week showed a huge jump in gross domestic product in the past three months.

Trump stresses that the economic priorities for his second term are to work on additional tax cuts, creating 10 million jobs in 10 months and creating one million small businesses. On the other hand, Biden insists that a rise in GDP is “not enough” to pull the country out of the “deep” recession caused by Covid-19.

Biden says his victory will help create 5 million new jobs by investing $ 400 billion in procurement and $ 300 billion in research and development for US companies. He proposes a tax increase for wealthy Americans, abolishing tax breaks that Trump granted to companies, and an increase in the minimum wage.

More than 87.7 million Americans cast their votes in early elections.

These were the details of the news Trump is on the verge of losing … he throws his... for this day. We hope that we have succeeded by giving you the full details and information. To follow all our news, you can subscribe to the alerts system or to one of our different systems to provide you with all that is new.