Typhoon “Goni” strikes the Philippines … and evacuated about a million... 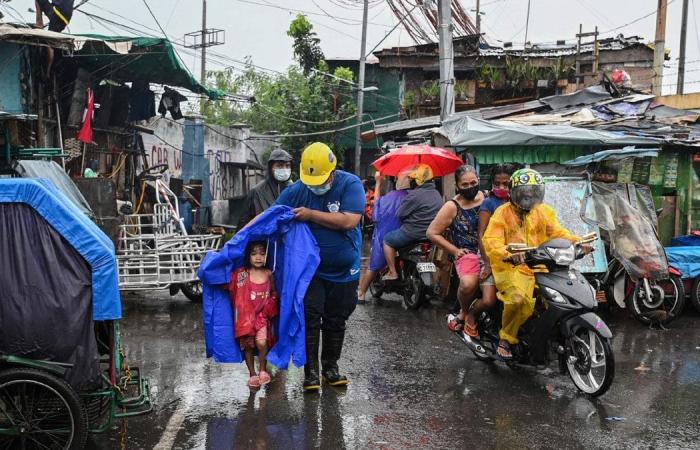 Hurricane “Goni”, which is the strongest this year, hit Philippines today is Sunday. The authorities spoke of catastrophic conditions after evacuating about one million people in anticipation of floods and devastating winds.

A few hours before landing on Catandoans Island around 4:50 (20:50 GMT Saturday), the “Gony”, which has transformed into a category of super-strong hurricanes, strengthened with winds of up to 225 km / h, according to the meteorological agency. Filipino.

“The wind is very strong,” said May Porras, 21, from her home on the coast in Legazpi. Trees can be heard shaking. This is very violent. ”

A regional security official, “Cedric Dayp”, said in a radio interview, that the roofs of the two evacuation centers had been blown out, and that the inmates had moved to the ground floor.

The official in charge of civil defense, Ricard Gallad, said Saturday that about a million people had been evacuated in the Bicol region, which includes the southern part of Luzon and Catandoans Island.

But civil defense spokesman Alexei Naz said Sunday that about 316,000 people had been evacuated so far. He added, “The last contact we had with our officers in Katnaduwans was at 03:00. They told us that the rain and the wind were very strong, then we lost contact with them. ”

There are approximately 31 million people on the path that “Goni” is expected to take, including Manila where evacuations are planned in poor areas where the risk of flooding is very high. The capital’s airport has been closed.

The meteorological agency said on Saturday that “catastrophically violent winds and torrential rains” are expected to arrive during the next 12 hours in the Bicol region, in the southeast of the main island of Luzon and in Catandoans.

The agency was particularly concerned about the situation in Catandoans, which was described earlier Sunday as “extremely dangerous”, fearing the sea level rise of up to three meters and of “catastrophic wind damage”.

“Goni” arrives a week after cyclone “Moulav”, which affected the same area, killed 22 people and flooded a large agricultural area, before continuing its path towards Vietnam.

“We are expecting storms, and we are monitoring the Mayon and Taal volcanoes in anticipation of possible avalanches and volcanic landslides,” Mark Timbal, spokesman for the agency in charge of responding to natural disasters, told ABS-CBN television

And the meteorological services warned that the high winds and heavy rain expected could cause large-scale floods and landslides in an area of ​​20 million people.

On Saturday, the authorities sent rescue teams and cars loaded with equipment in anticipation of the huge hurricane.

And empty schools since the start of the COVID-19 pandemic are being used as emergency shelters for evacuees. Gyms and government-run evacuation centers are also used.

These were the details of the news Typhoon “Goni” strikes the Philippines … and evacuated about a million... for this day. We hope that we have succeeded by giving you the full details and information. To follow all our news, you can subscribe to the alerts system or to one of our different systems to provide you with all that is new.