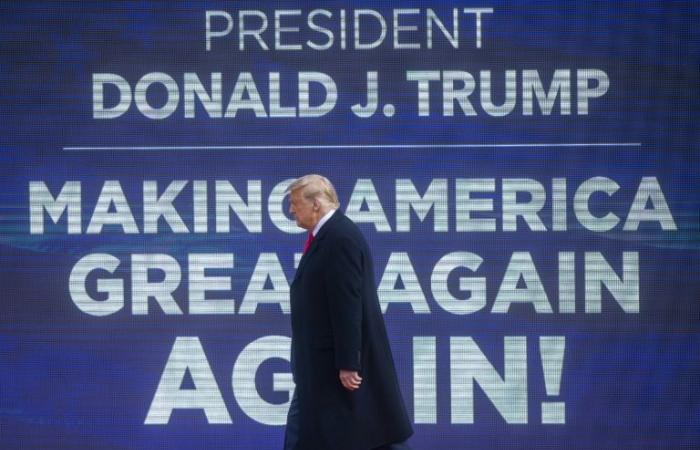 Donald Trump will have a daunting day on Sunday with five meetings in as many key states, while his opponent Joe Biden is focusing his campaign end on Pennsylvania, also crucial, two days before the US election on November 3.

At 74 years old and after hundreds of campaign meetings, the Republican president shows no signs of fatigue, quite the contrary, and is preparing for more than 3,500 km of travel in total this Sunday (Michigan, Iowa, North Carolina, Georgia , Florida). On Monday, he will also have five meetings, in four states.

“Four more years, four more years,” chanted Saturday, in turn, supporters of Mr. Trump gathered in four cities in Pennsylvania. The former real estate developer had won this former industrial stronghold, likely to decide the fate of the election, on the wire in 2016 against Hillary Clinton.

At the same time, the first black president of the United States, Barack Obama, harangued the militants of Democrat Joe Biden gathered in “drive-in” in the State of Michigan, also essential for the ballot of November 3.

“Everything is at stake on Tuesday,” assured Mr. Obama wearing a “VOTE” mask, denouncing the management by his successor of the Covid-19, in the country most damaged by the pandemic.

In front of his supporters, very few of whom wear masks, the Republican billionaire likes to minimize the severity of Covid-19, with which he himself was infected.

Under a Biden administration, “you will be a prisoner in your own country,” Donald Trump predicted on Saturday. Of which 18 meetings, according to estimates by economists from Stanford University published on Thursday, resulted in more than 30,000 cases of coronavirus and more than 700 deaths (not necessarily among the participants), on the basis of statistical modeling.

The number of infections in the country continues to remain very high, with 77,000 new cases in the past 24 hours, the day after a national record (94,000), according to the Johns Hopkins University count. The United States is the country most affected both in terms of death toll (230,320) and cases (9,111,013).

Unlike his opponent, Joe Biden scrupulously respects barrier gestures and precautionary measures, to the point of being accused by the Trump team, which relays questions about his physical and mental form, of “hiding in his sub -ground”.

As if to respond to these accusations, Joe Biden arrived on his campaign platform in Flint at a run, equipped with his famous Aviator sunglasses, to the nervous notes of “Sir Duke” by Stevie Wonder. “It is time for Donald Trump to pack his bags and go home,” said the Democrat.

The question is whether more black Michigan voters than in 2016 will vote. Four years ago, their small number had tipped this state into the hands of Donald Trump, for less than 11,000 votes.

The Biden-Obama duo then took over the direction of Detroit, the historic heart of the American auto industry and one of the poorest large cities in the United States, where nearly 80% of the population is African-American.

This year, the former vice-president leads by seven points ahead in the most recent polls.

His running mate Kamala Harris was in Florida to urge voters to go to the polls early in one of the states where Joe Biden appears able to challenge the Republican for victory.

Joe Biden’s campaign team announced he would address “the nation” on election night, something Hillary Clinton failed to do when she was defeated 4 years ago.

Opposite, the First Lady of the United States, Melania Trump, campaigned for her side on Saturday in Wisconsin and Republican Vice President Mike Pence in North Carolina, where the two candidates are neck and neck.

A sign of the tension that reigns throughout the country as the polls approach, businesses in several American cities, including New York and the capital Washington, were barricaded for fear of protests that would degenerate.

In the event of a close race and delayed results, some fear that supporters of the two candidates will take to the streets to demand the abandonment of the opponent.

“There is going to be a mess in our country,” Donald Trump predicted on Saturday. And the president did not reassure by repeatedly refusing to say clearly whether he would cede power peacefully if defeated on November 3.

CNN nonetheless revealed on Saturday that several White House officials had been working well for months, as tradition dictates, with the Biden team to prepare for a possible handover.

These were the details of the news Trump in five key states, Biden in Pennsylvania for this day. We hope that we have succeeded by giving you the full details and information. To follow all our news, you can subscribe to the alerts system or to one of our different systems to provide you with all that is new.