It was magnitude 7 and caused a tsunami; there are... 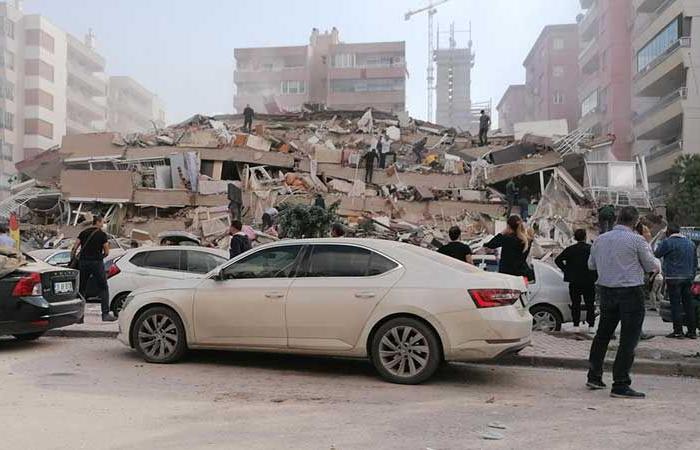 A A strong earthquake of magnitude 7 shook Turkey and Greece on Friday, and caused the collapse of several buildings. At least 14 people died and more than 400 were injured.

The magnitude of earthquake, which occurred ten kilometers deep, was evaluated by the American Geophysical Institute (USGS) with a magnitude 7 and 6.8 by the Turkish authorities, who have registered so far 84 aftershocks, with 16 of magnitude greater than 4.

Some information about the deceased

In Turkey, the Presidency for Emergency and Disaster Management (AFAD) confirmed 12 dead, one of them drowned, and 419 wounded.

Meanwhile, two teenagers died on the Greek island of Samos (southeast) after the wall of a building collapsed, public television Ert said.

According to ERT, it would be two young people aged 15 and 17. The fire service indicated that the “two young men were found unconscious under the rubble of a wall.” They are the first fatalities in Greece.

Where was the earthquake felt?

The trembling, which was felt in Istanbul and Athens, it took place in the Aegean Sea, southwest of Smyrna, Turkey’s third largest city, and near the Greek island of Samos.

“At this time, we have received reports that six buildings collapsed in Bornova and Bayrakli,” in Izmir province, Turkish Interior Minister Suleyman Soylu said on Twitter.

“ASome of our fellow citizens are trapped under the rubble“Added the Minister of the Environment, Murat Kurum, who for his part reported five buildings collapsed.

The televisions in the country showed images of dust clouds rising in the skywhile the inhabitants rushed into the street victims of panic.

In Istanbul there is no damage

The gobernador de Estambul, Ali Yerlikaya, noted that no damage was found so fara in the economic capital of the country.

“All our institutions began to travel to the site to initiate the necessary efforts,” declared President Recep Tayyip Erdogan on Twitter.

There was a tsunami

A tsunami and property damage occurred on the Greek island of Samos in the Aegean Sea after the strong earthquake, according to the Greek public television Ert.

The earthquake took place off the coast of this island and near the Turkish city of Izmir, which was also seriously affected by the earthquake, which caused collapses of house walls and floods in the port of Samos, according to images released by Ert.

“It was chaos, we have never experienced that… Until now we have no victims. Some buildings have been damaged, a church in particular ”, located in the port of Karlovassi, the Deputy Mayor of Samos, Dionysiou, told Ert Giorgos.

Strongly felt on Samos but also on the island of Crete and in Athens, the earthquake, of prolonged duration, “It was registered at 11:51 GMT and its epicenter was located 19 km from Samos and 2 km deep,” according to a statement from the Greek seismology observatory.

Protection Civil of Greece asked the population of Samos to remain “in the open and away from buildings”, as well as to “stay away from the coasts” of the island.

Greece is located on major geological faults and earthquakes are frequent, especially at sea, in most cases without causing casualties.

These were the details of the news It was magnitude 7 and caused a tsunami; there are... for this day. We hope that we have succeeded by giving you the full details and information. To follow all our news, you can subscribe to the alerts system or to one of our different systems to provide you with all that is new.