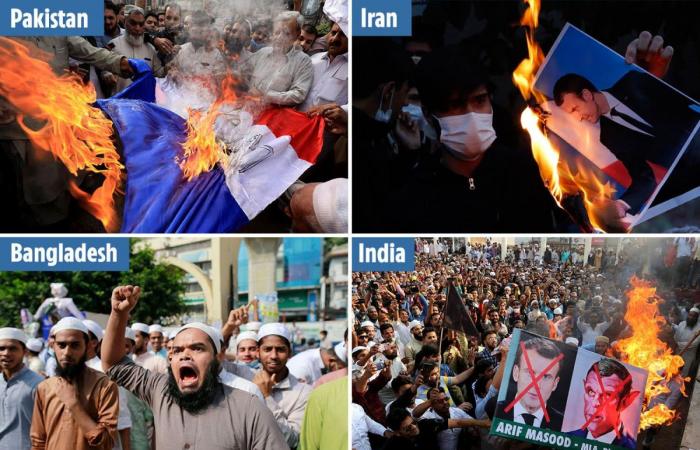 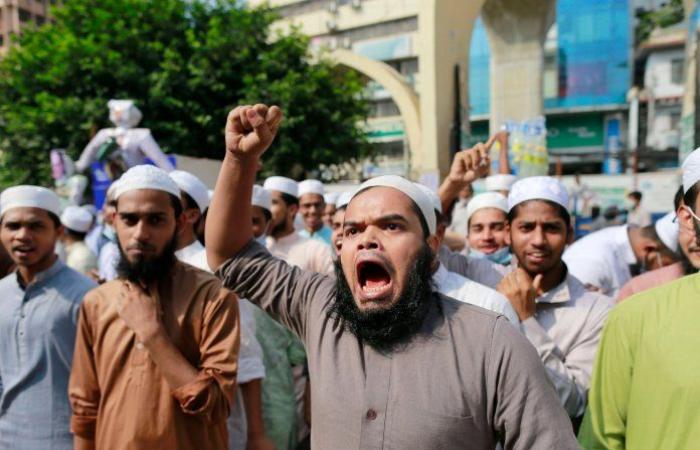 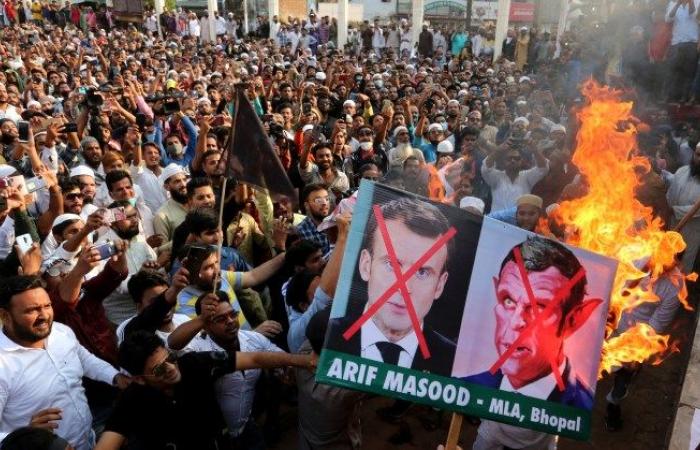 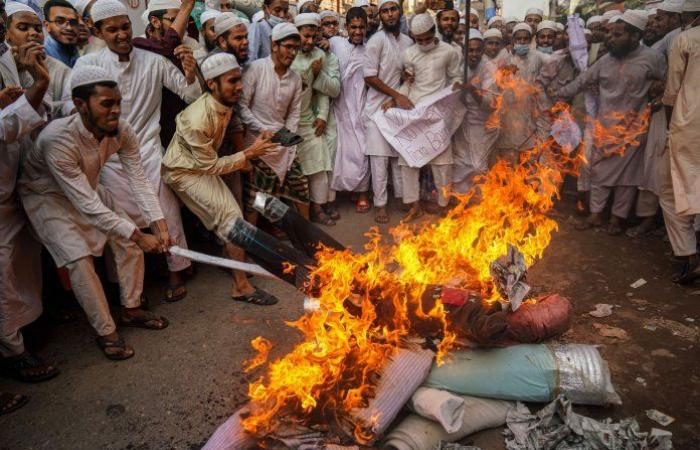 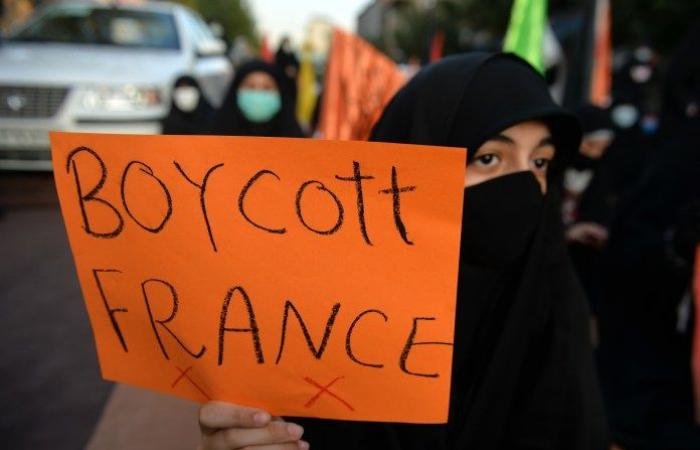 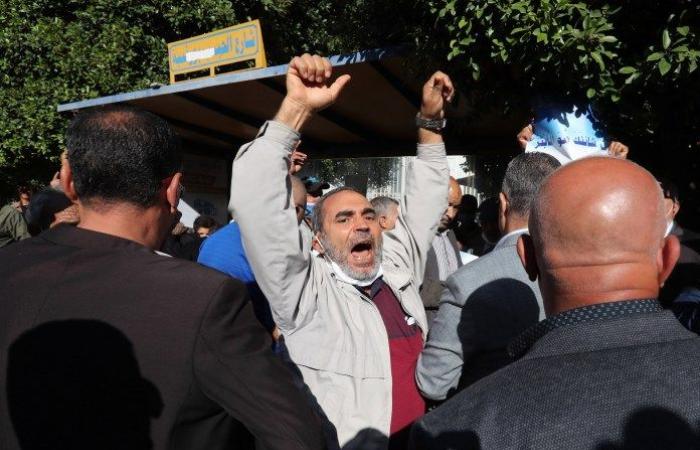 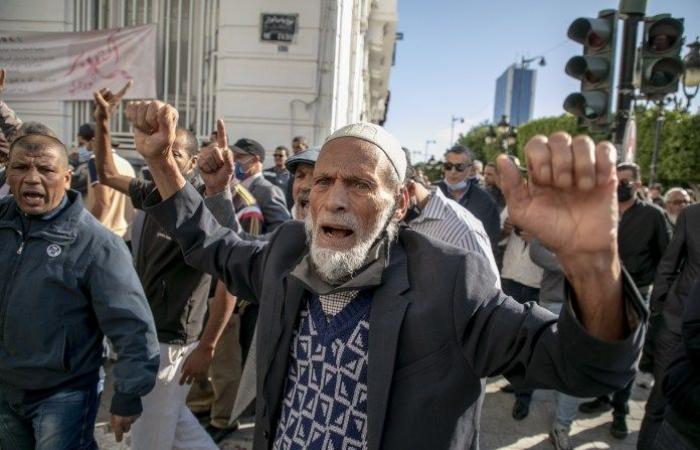 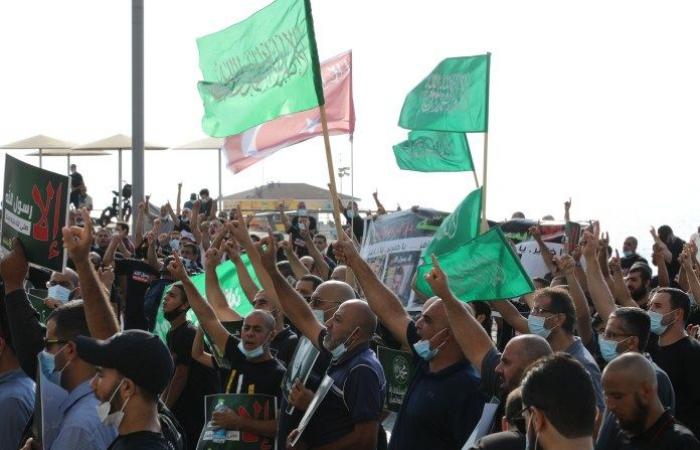 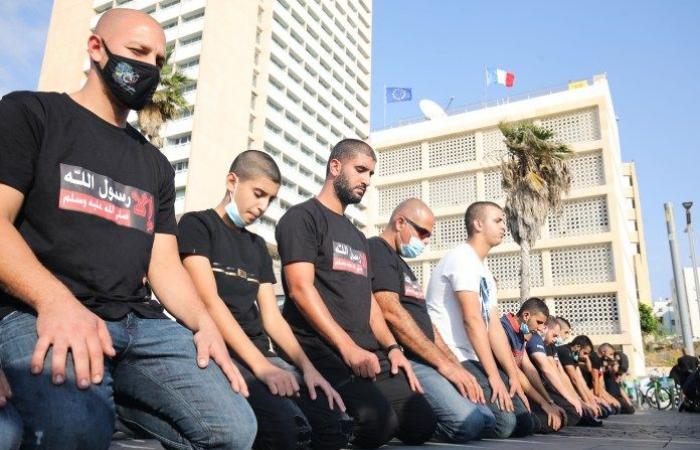 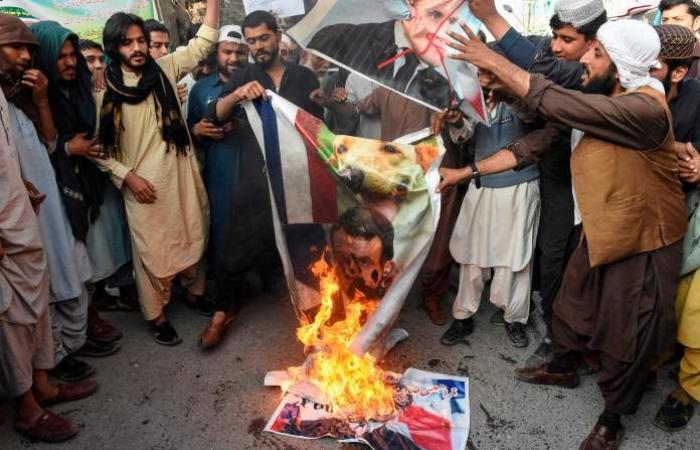 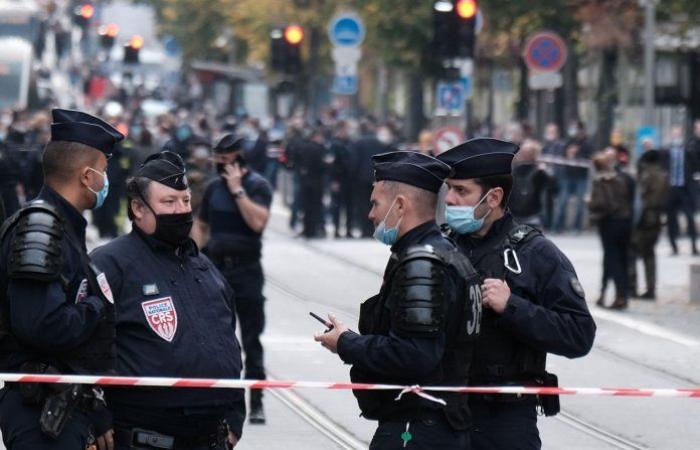 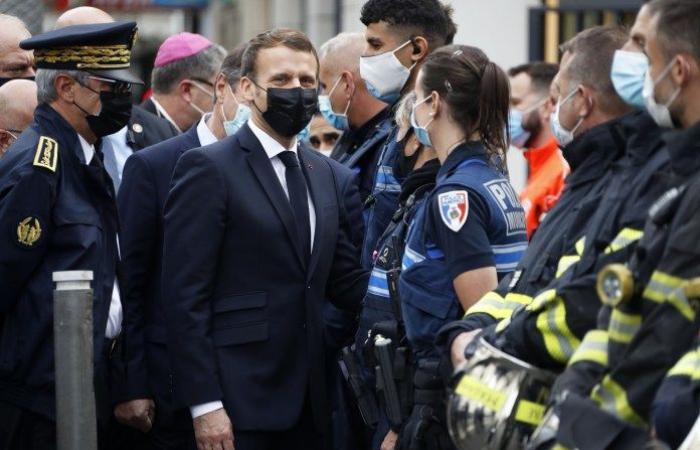 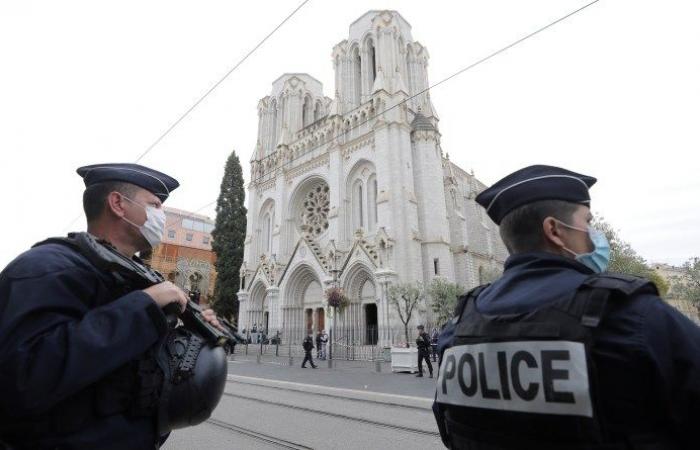 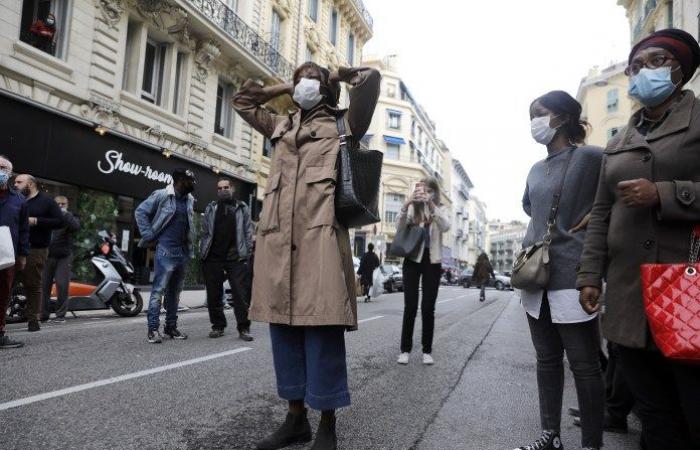 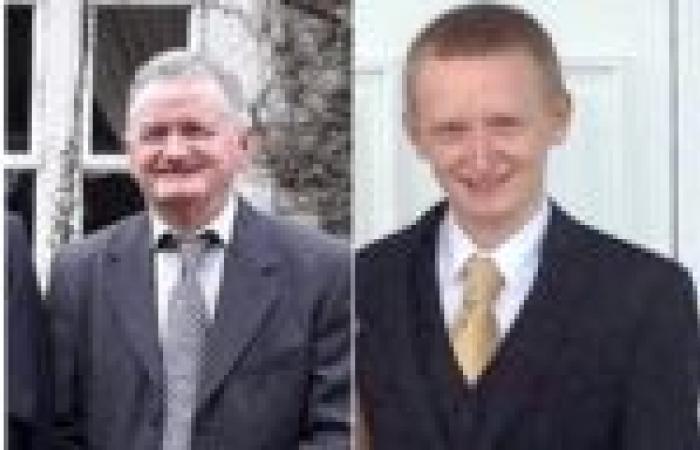 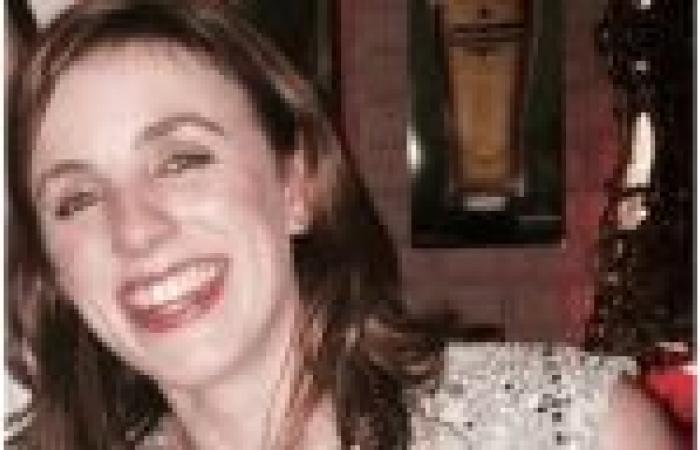 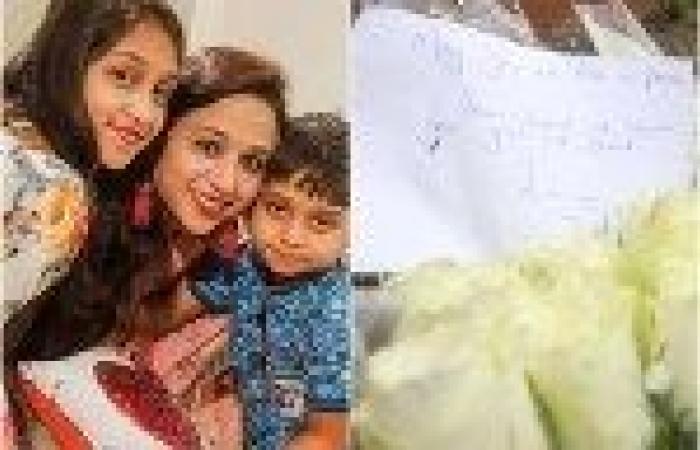 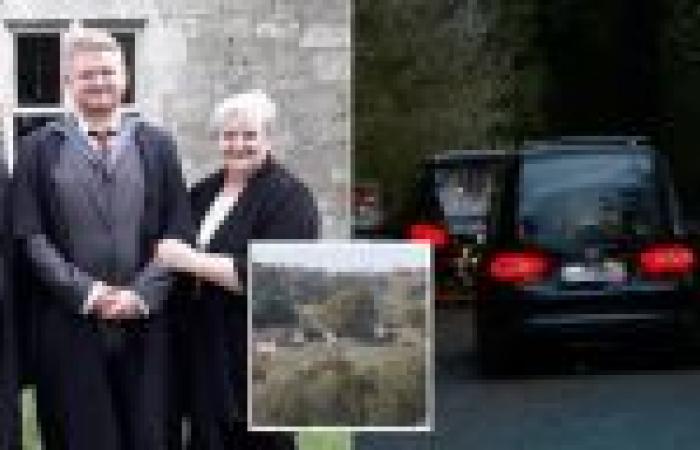 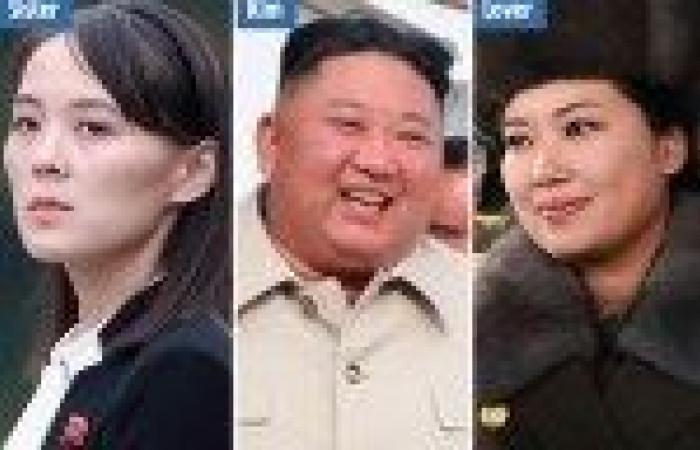 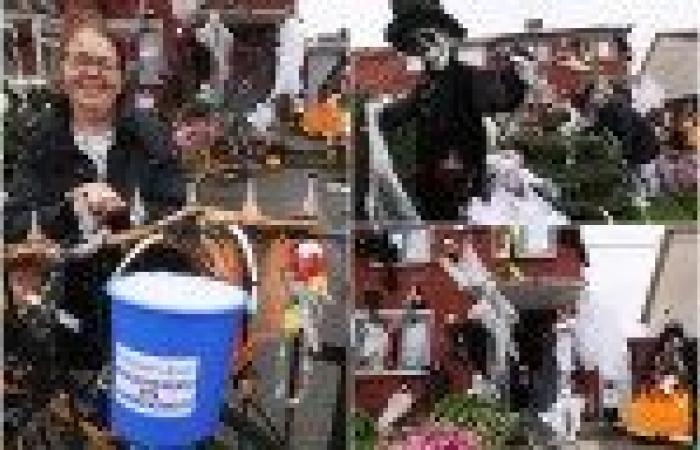 MUSLIMS have taken to the streets to burn French flags and images of Emmanuel Macron to spread anger over controversial cartoons of the Prophet Muhammad.

Thousands of demonstrators denounced France during protests in several Muslim countries, while Macron defended the right to publish the Charlie Hebdo cartoons.

It comes as France was hit by two suspected terrorist attacks on Thursday that left three people dead – including a woman who was beheaded in a church by a knife man who shouted “Allahu Akbar”.

France has raised its alert status to the highest possible level of “terrorist attack emergency”.

Thousands of demonstrators in Tunisia, Pakistan, Israel, Palestine and Russia have taken to the streets to burn Macron pictures and to oppose the cartoons.

Dozens of Iranians gathered in protest in front of the French embassy in Tehran, state media reported.

Some held up posters with red crosses on pictures of French goods.

In Dhaka, hundreds of Bangladeshi Muslims took to the streets of the capital for another day, chanting slogans such as “Boycott French products” and burning images of Macron, whom they described as an enemy of Islam.

In the Somali capital Mogadishu, protesters shouted: “France defeated, it has insulted our prophet.”

The dispute with France flared up after a French teacher who showed cartoons of the Prophet’s pupils published in Charlie Hebdo was beheaded in France earlier this month.

Samuel Paty, 47, was beheaded by 18-year-old Abdullah Anzorov on October 17 after teaching his students about the importance of free speech through the cartoons.

The picture he showed the students was the same one published by Charlie Hebdo that sparked the attack on the magazine’s offices that killed 12 people.

The caricatures are viewed as blasphemous by Muslims.

The French government saw the knife attack as an attack on freedom of expression.

Macron said he would redouble his efforts to prevent conservative Islamic beliefs from undermining French values.

Charlie Hebdo published a cartoon on its cover showing the Turkish leader Tayyip Erdogan, sitting in a white t-shirt and underpants, holding a can of drink in one hand, and lifting the skirt of a woman wearing an Islamic hijab around her bare bottom to reveal.

Turkish officials said Ankara would take legal and diplomatic steps in response to the cartoon, calling it a “disgusting effort” to “spread its cultural racism and hatred”.

In Cairo, Egyptian President Abdel-Fattah al-Sisi said freedom of expression should stop if more than 1.5 billion people are offended.

Yesterday, Iranian President Hassan Rouhani warned that the dispute over the cartoons could lead to “violence and bloodshed”.

“It is a surprise that this would come from those who claim culture and democracy, that somehow, if unintentionally, they would encourage violence and bloodshed,” he said.

“Westerners must understand that the great prophet of Islam is loved by all Muslims and freedom lovers in the world.

The French Foreign Ministry has issued safety warnings to French citizens in Indonesia, Turkey, Bangladesh, Iraq and Mauritania and advised them to exercise caution.

You should stay away from protests against the cartoons and avoid public gatherings.

France has taken a tough line in defending the controversial cartoons of the Prophet Mohammed.

In France, cartoons of prophet Mohammed were exhibited in solidarity with Paty to defend what many in the country see as values ​​of free speech and secularism.

In the attack on Thursday in Nice, three people were killed in a bloody rampage in which a suspected terrorist stormed the Notre-Dame Basilica.

One of the victims – a woman aged 70 – was reportedly beheaded in the church.

She was widely reported in French media that she was beheaded, and the city’s mayor also confirmed the nature of the injuries as well as police sources speaking to Reuters.

The male victim who was stabbed to death is believed to be the church’s 45-year-old sacristan, an officer responsible for maintaining the church.

The third victim – a woman in her thirties – reportedly escaped and escaped to a nearby bar but succumbed to her injuries, reports BFMTV.

In the meantime, police have confirmed that a man who shouted “Allahu Akbar” while brandishing a knife was shot dead 160 miles away in Avignon.

A security guard at the French consulate in Jeddah was also stabbed and slightly injured.

Le Parisien also reported that a knife-man was caught near a church in Paris after telling his family he wanted to copy the attack in Nice.

Another man, described as known to the French secret services, was also arrested while trying to get on a tram armed with a 12-inch knife.

President Emmanuel Macron announced that after the violence, up to 7,000 soldiers will be sent to the streets across France to protect sights, schools and places of worship.

He denounced the bloodbath in Nice as an “Islamic terrorist attack” and defiantly said that France would “not give up our values”.

The most recent attack on Nice also comes after 86 people died in the city when a terrorist rammed a 19-ton truck through the crowd on Bastille Day in July 2016.

And priest Jacques Hamel, aged 85, had his throat cut by two extremists in his church in Normandy that same month.

This is followed by the stabbing of two people in front of Charlie Hebdo’s former offices in Paris.

Macron visited the scene in Nice on Thursday with Mayor Estrosi, while the French National Assembly observed a minute’s silence in solidarity with the victims.

Prime Minister Jean Castex said the government’s response will be “relentless and immediate”.

Italian leader Giuseppe Conte condemned the “heinous attack” and said it would “not shake the common front that defends the values ​​of freedom and peace”.

British Prime Minister Boris Johnson said on Twitter: “I am appalled to hear news of a barbaric attack on the Notre Dame Basilica from Nice this morning.

“Our thoughts are with the victims and their families, and Britain stands firmly against France against terror and intolerance.”

“Our thoughts go with the victims and their families, and we offer the French people all our support in pursuing those responsible for this appalling attack.”

Pope Francis also prayed for the victims of the attack when the Vatican said “Terrorism and violence can never be accepted”.

These were the details of the news Muslims around the world burn French flags and pictures of Macron... for this day. We hope that we have succeeded by giving you the full details and information. To follow all our news, you can subscribe to the alerts system or to one of our different systems to provide you with all that is new.