Messi’s message to Bartomeu after Barcelona’s victory over Juventus in the... 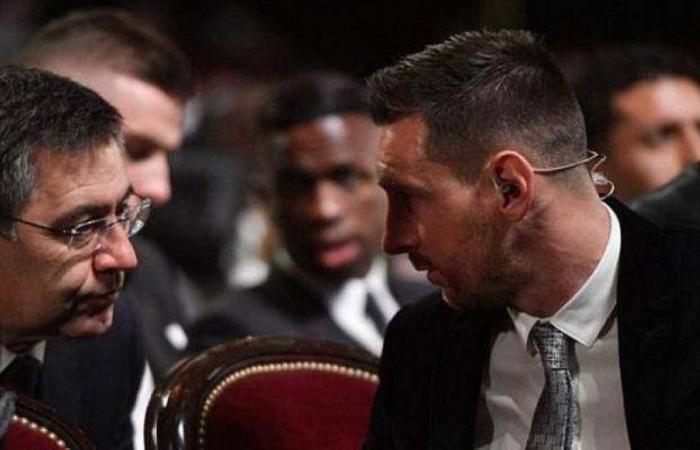 Many football analysts have linked the resignation of Josep Maria Barotomeu, the club’s president Barcelona, ​​Spain From his position with the great performance he appeared on Lionel Messi 6-time Ballon d’Or winner – the highest number for a soccer player in the world – in the Barcelona matchItalian Juventus in a Champions League football championship Championsleigh.

Lionel Messi led his Barcelona team-mates to a 2-0 victory over Juventus in the match that took place yesterday evening, Wednesday, at the Old Lady’s Stadium.

There is no doubt that the announcement of Bartomeo’s resignation from his post last Tuesday evening was welcomed by Lionel Messi, the icon of the Catalan giant who had already opened fire on him and implicitly held him responsible for the crisis in the corridors of the “Camp Nou” this summer.

Barcelona were eliminated from all local and regional championships last season empty-handed, including the Champions League after the humiliating defeat by Bayern Munich, 8-2 in the quarter-finals of the most important European competition at the club level.

The match between Barcelona and Juventus witnessed an exceptional performance by Barghout, who went by scoring a penalty kick, in stoppage time, to take Barcelona to the top of the group.

Also read: Barcelona provokes Juventus and ignites the battle for the best between Messi and Ronaldo again

Lionel Messi’s influence on the course of the match was evident in his elaborate passes to his teammates on the field, a performance that experts linked him to Bartomeu’s recent resignation.Experts believe that Messi, with his wonderful performance against Juventus, may have wanted to send a message to the resigned Bartomeu, who stood a stumbling block in the way of the departure of the flea from Barca in the Mercato last summer.

Messi appeared in almost every corner of the stadium during the confrontation with the Italian battalion Andrea Pirlo.

Statistics published by the UEFA website show that Messi tried to make 87 passes in 98 minutes during the Barcelona-Juventus match, including lost time in both halves – and actually executed 76 of them successfully.

Only his Barcelona teammate Jordi Alba surpassed Messi in the Juventus match, and 13 of his passes went to the tango star.

Messi’s great performance against Juventus, who lacked the efforts of his veteran Portuguese star Cristiano Ronaldo, Leo’s old competitor in the Spanish Premier League (La Liga), came after Barcelona’s defeat by Real Madrid in the El Clasico match by three goals, which reinforces the link between Messi’s strong showing against Juventus and the departure Bartomeu.

Barcelona fans have expressed their deep concern about Messi’s state of mind after the defeat of El Clasico, which calmed down a lot after Bartomeu’s resignation from the presidency of Barcelona, ​​as the move might mean that Barghout will end his football career inside the halls of Camp Nou.

The Catalan fans are expecting a lot and a lot of Messi in the Spanish League championship, in which Barcelona occupies 12th place at the present time, only 6 points difference from his rival Real Madrid.

These were the details of the news Messi’s message to Bartomeu after Barcelona’s victory over Juventus in the... for this day. We hope that we have succeeded by giving you the full details and information. To follow all our news, you can subscribe to the alerts system or to one of our different systems to provide you with all that is new.