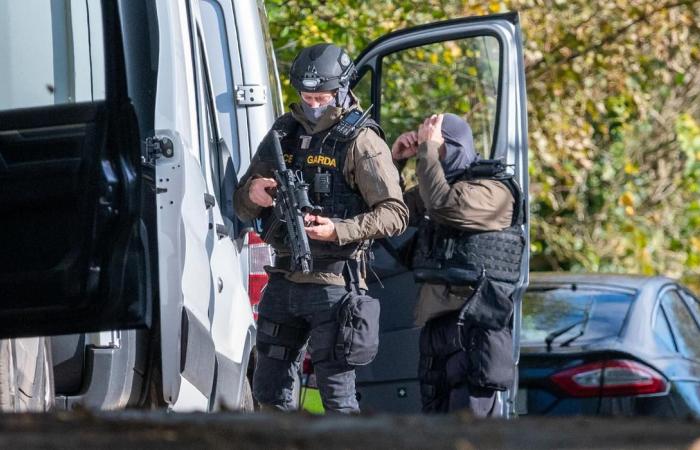 O’Sullivan’s farm in Kanturk was just emerging from the cover of darkness on Monday morning when Anne O’Sullivan ran to the gate.

She couldn’t open it, neighbors say, and as she desperately ran for another way out, a scene of devastation unfolded in her family home.

Their eldest son, Mark, was shot in his bedroom. A short time later, her second son Diarmuid and her husband Tadg would also be dead.

Despite being weak from prolonged illness, Ms. O’Sullivan managed to walk three quarters of a mile across fields that led to a neighboring farmhouse, where her screams and pleadings for help in a tragedy like no other sounded the alarm.

“It took her (Anne) almost 40 minutes to get from her home to the nearest farm,” said a neighbor. “She was in her night clothes, barefoot.”

Ms. O’Sullivan, 60, a nurse at Mount Alvernia in Mallow, was hospitalized in Dublin last week for treatment and was accompanied to the capital by her older son Mark.

It is believed that they stayed with the neighbors for a few days after their return to Castlemagner, but decided to return to the family homestead on Sunday. The simmering tensions over Ms. O’Sullivan’s will (the farmland belonged to her through her father) had caused problems in the family, but she was desperate to return home.

The exact details of what happened upon their return are unclear, but it is believed that Diarmuid and Tadg were still thinking about inheritance the last time the family came together under one roof. A close friend of Mrs. O’Sullivan’s, who was aware of what was going on behind the scenes, sent a text to make sure everything was okay. The answer indicated that it was.

After Ms. O’Sullivan settled down in bed that night, she awoke in shock to the sound of gunfire. In a panic, she grabbed her cell phone but couldn’t find it.

When she fled the house, Mark had been shot seven times. It is still unclear who fired the shots or whether both his father and brother, who later turned the guns on themselves, were responsible.

When she was safe, her entire family had been destroyed.

“She can never go back there,” said the neighbor. “It’s a scene of sheer desolation.”

Yesterday, when Gardaí tried further to summarize the events that led to the suspicion of murder and double suicide, the O’Sullivan family farm was still closed to visitors. A single bouquet of flowers, left as a token of respect, lay next to a tree. Shortly after lunch, neighbors from surrounding farms arrived with more flowers.

A few days after the horror scenes at O’Sullivan Farm, locals were in shock at the extent of the devastation within just one family.

In the nearby village of Castlemagner and further away in Kanturk, preparations were made for the funerals of the three men.

“We will do our best to support Anne in the coming days,” said a Castelmagner local.

“The funerals for Diarmuid and Tadg are private and Covid-19 means there’s not much we can do – but the plan is to show our respect by standing in the village. Everyone is dear to Anne because now everything is left and this piece will be tough. ”

As an only child, Ms. O’Sullivan (née Cronin) comes from a well-connected family, some of whom have businesses in Kanturk. Described as calm and humble, she had lived all her life on the farm, which she later shared with her husband and sons. The land had been owned by the Cronin family for generations, and Ms. O’Sullivan reportedly wanted it not to be sold and instead remain in ties of blood.

The local pastor, Father John Magner, who visited Ms. O’Sullivan immediately after the tragedy, said the focus will now be on supporting her over the next few days. “The thoughts of the entire community are with her,” he said.

“It is an indescribable tragedy for which there are no words. I spoke to her on site. You’re trying to be comfortable, that’s all you can do. ”

On the local community’s Facebook page, Canon Tony Bluitt said that the people of Kanturk and Castlemagner communities express their deepest condolences to Ms. O’Sullivan “over the tragic loss of her husband Tadg and sons Mark and Diarmuid.”

“We are all deeply shocked and stunned by this heartbreaking news. We pray the Lord’s comfort for Anne and her family and pray for God’s mercy for Tadg, Diarmuid and Mark. May they rest in peace. ”

These were the details of the news Kanturk tragedy: “Anne may never return there – it’s a scene... for this day. We hope that we have succeeded by giving you the full details and information. To follow all our news, you can subscribe to the alerts system or to one of our different systems to provide you with all that is new.