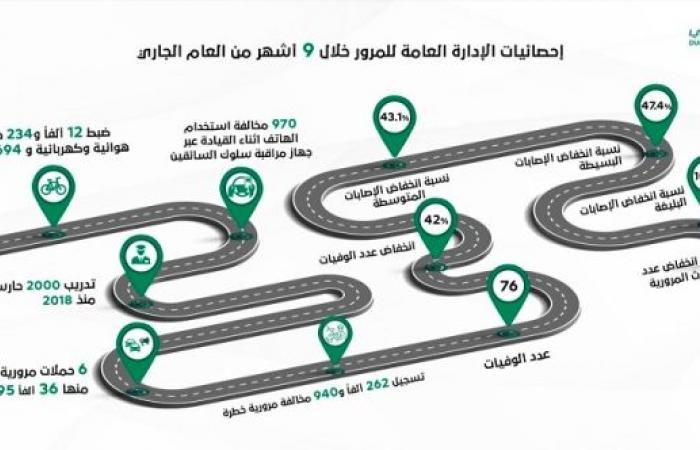 The General Traffic Department in Dubai Police recorded a decrease in traffic statistics in Dubai during the 9 months of this year, as the number of traffic accidents decreased by 46%, minor injuries decreased by 47.4%, moderate injuries by 43.1% and severe injuries by 10.2%, in addition to a decrease The number of deaths resulting from traffic accidents from 132 to 76 deaths, a decrease of 42% compared to the same period last year.

The General Traffic Department also recorded 262,940 serious traffic violations during the 9 months of this year, as the violations varied between driving a vehicle in a way that endangers the driver’s life or the lives of others or their safety or security at risk, and the failure of light vehicles to adhere to the obligatory lane, sudden swerving of the vehicle, The validity of the vehicle’s tires while driving, the heavy vehicles not adhering to the mandatory lane, the transportation of passengers in excess of the prescribed means in the “minibus” means, and the truck drivers overtaking in a dangerous manner, entering the road without ensuring that it is clear, passing by the side of the road, and not leaving Sufficient distance behind the front vehicles, failure of vehicle drivers to abide by traffic signs and instructions, pedestrians crossing the road from places not designated for their crossing, in addition to parking in the middle of the road without justification.

The review of the statistics results came during the inspection of His Excellency Lieutenant General Abdullah Khalifa Al Marri, Commander-in-Chief of Dubai Police, to the General Traffic Department as part of the annual inspection program on public departments and police stations, in the presence of His Excellency Major General Engineer Muhammad Saif Al Zafin, Assistant Commander-in-Chief of Operations Affairs, and Brigadier Saif Muhair Al Mazrouei, Director of the General Administration The Traffic Department, Brigadier General Muhammad Khadim bin Surur, Director of the Bur Dubai Police Station and Chairman of the Board of Directors of Police Stations, Colonel Jumah Sweidan, Deputy Director of the General Traffic Department, Colonel Dr. Officers.

His Excellency Team Al Marri praised the department’s achievements and its future projects, stressing the importance of working within clear strategic and future plans and harnessing and adapting all modern technologies and technology, and making use of them in developing and sustaining the work system, indicating that the importance of qualifying experts in various traffic disciplines and contributing to drawing up a plan for exploring The future to achieve the strategy of the Dubai Police General Command.

Lieutenant Colonel Abdullah bin Ghaleb, Director of Traffic Accidents Department, reviewed the department’s results, achievements, performance index, future projects, and death statistics, as the department recorded 76 deaths during nine months of this year in various streets of the emirate, as the awareness campaigns and traffic initiatives resulted in one death in September. .

He pointed out that the General Traffic Department organized 6 awareness campaigns since the beginning of the year until last September, benefiting more than 36,095 people, including the pedestrian safety campaign, Ramadan without accidents, the sudden deviation campaign, the not leaving enough distance campaign, the summer without accidents campaign, in addition to the campaign back to school.

He presented the causes leading to death, first the lack of appreciation for road users, then the sudden deviation, then not leaving enough distance, then standing in the middle of the road, followed by excessive speed, negligence and inattention, and finally driving under the influence of alcoholic beverages, in addition to other causes.

His Excellency Al Marri listened to an explanation about the campaign management and traffic awareness, about the community awareness programs implemented during the past year and 9 months of this year, in addition to reviewing the results of the awareness campaigns during the Corona pandemic (Covid 19), which benefited 7,690 people.

His Excellency also listened to Colonel Muhammad Karam, Director of Traffic Technologies Department, to explain the statistics of speed fatalities, and the most important achievements and projects achieved by the administration, as the Department issued 113,580 traffic violations through the automated analysis project without human intervention during the 9 months of this year.

Colonel Muhammad Karam added that the project consists in the automatic relaying of the process of processing, inserting and deporting violations of technical control devices without human intervention using artificial intelligence techniques, in addition to displaying a modern pedestrian crossing control system, through a technical device consisting of several cameras, sensors and a light signal that monitors an area Pedestrian crossing As the pedestrian approaches the crossing area, the device turns the traffic light from green to red, indicating that an experimental device was installed and resulted in 179 violations of pedestrian crossing.

Colonel Muhammad Karam also demonstrated a device to monitor drivers’ behavior, developed using artificial intelligence techniques to simulate the real presence of an officer monitoring the streets, and the system released 970 violations of using a phone while driving.

These were the details of the news “Dubai Traffic” records a decrease in the number of traffic accidents... for this day. We hope that we have succeeded by giving you the full details and information. To follow all our news, you can subscribe to the alerts system or to one of our different systems to provide you with all that is new.

PREV 400 tombs dating from the 8th century and oriented towards Mecca...
NEXT DeepMind develops an AI that solves a 50-year-old medical challenge