Bartomeu gives up his position as president of FC Barcelona 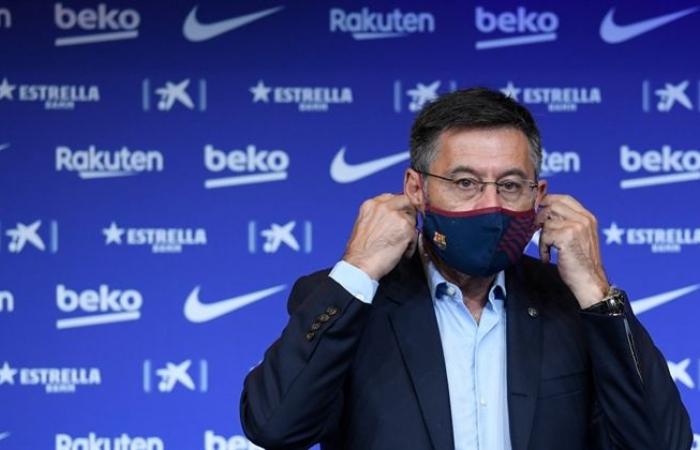 Sharjah 24 – Asaad Khalil:
Josep Maria Bartomeu, the controversial president of Barcelona, ​​announced his surrender at last, in light of the crisis the club is going through, and announced his resignation, ending a difficult era in the history of the Catalan club.

Bartomeu said in a press conference, on Tuesday, that I am appearing before you to confirm my resignation, and that of the rest of the club’s board of directors.

And the Spanish media indicated, earlier Tuesday, that Bartomeo resigned, during an emergency meeting of the club’s board of directors.

The Spanish newspaper “Mundo Deportivo” stated that Bartomeu justified his resignation by refusing the Catalan authorities to postpone the anticipated vote to withdraw confidence from Bartomeu.

Bartomeu had called for the vote to be postponed to withdraw confidence from him, citing the outbreak of the new Corona virus, indicating that he refused to risk the health of club members.

Bartomeu won the presidency of the club, in the elections held in 2015, after the team won the treble (League, Cup and Champions League).

This was Barcelona’s last title in the Champions League so far, and the club has suffered successive problems and crises off the field over the past few years.

It was planned that this ballot will take place on the withdrawal of confidence from Bartomeu, on the first of November.

At the club, Bartomeu’s opponents collected more than 20,000 signatures from club members to push for this proposal, while more than 16,000 signatures were required according to the club’s regulations.

Bartomeu had angered and resented many members of the club and his supporters as well, after his differences with the Argentine, Lionel Messi, the star of the team, which prompted Messi to demand to leave the team in the summer of this year.

However, Messi, 33, settled in the end to stay, after a long dispute with the club’s management, regarding Barcelona’s eligibility to obtain the value of the penalty clause in the player’s contract, which expires in June 2021.

Barcelona’s crisis worsened, with the team losing 1/3 to Real Madrid last Saturday in the first El Clásico of the Spanish League this season, leaving Barcelona to twelfth place in the competition table, while Real top the table.

These were the details of the news Bartomeu gives up his position as president of FC Barcelona for this day. We hope that we have succeeded by giving you the full details and information. To follow all our news, you can subscribe to the alerts system or to one of our different systems to provide you with all that is new.