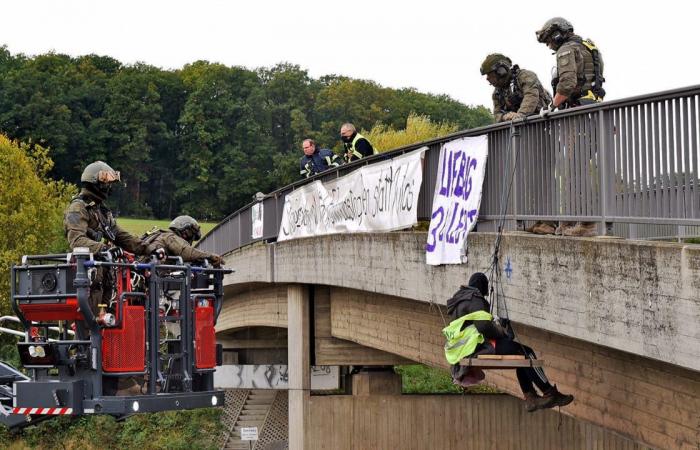 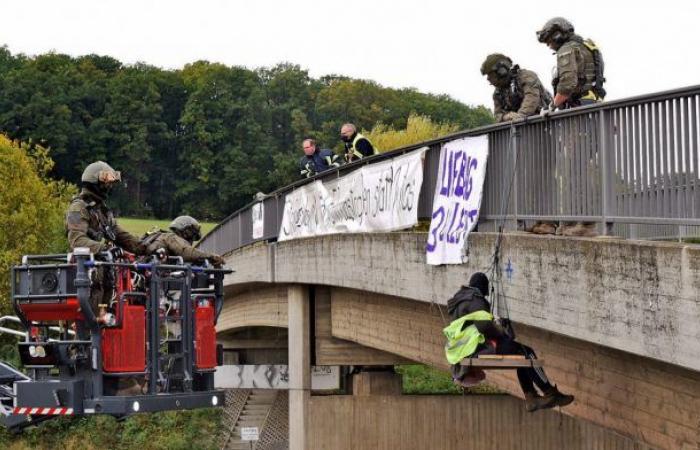 Wiesbaden – On October 14th, environmental activists abseiled from a bridge on the A3 near Idstein (Hesse). There was a traffic jam. At the end of it, a Skoda driver (29) slammed into a truck – artificial coma.

Well, not even two weeks after the terrible accident, activists have roped down again on the A3! This is confirmed by the BILD motorway police.

At around 6.45 a.m., three people had roped off a pedestrian bridge. An activist: “By hanging, we create an artificial traffic jam and attention.”

The A3 Frankfurt-Cologne has therefore been closed in both directions since the early hours of the morning between the Wiesbadener Kreuz and Niedernhausen because of the police operation. The bridge is one near Wiesbaden-Breckenheim.

The activists are – again – opponents of the controversial A49 expansion. A picture of the action was published on Twitter – with the hashtag #dannibleibt.

Unbelievable: There was also a rappelling action on the A661 in the morning. According to BILD information, there are people on the road at Offenbach-Kaiserlei. There was also a similar campaign on the A5 near Zeppelinheim (Neu-Isenburg). Apparently the activists tried on Monday morning to bring all rush hour traffic to a standstill.

In a press release on Monday morning, the activists named the reason for the blockades: “Several groups operating independently of one another blocked various highways today at the beginning of the week. Among other things, the action is intended to put pressure on the Hessian state government, especially the Greens, who betray all ecological values ​​with their consent to the construction of the A49 and thus endanger the livelihoods of the young generation.

In protest against the clearing of the Danneröder Forest for the expansion of the A49, two people roped down from a motorway bridge between Idstein and Bad Camberg on October 14 at 10 a.m. The police blocked the A3 for security reasons, the SEK moved in to rescue the blockers from the bridge. The terrible accident occurred at 11 a.m.: The 29-year-old drove his Skoda into a truck, suffered severe head injuries and was put into an artificial coma.

Of the seven activists arrested (two men, five women), six were quickly released. An arrest warrant was issued against a man, but it was immediately suspended. A lawyer assured that he would forward a summons from the court to his client. The public prosecutor’s office is investigating the activists on suspicion of coercion and negligent bodily harm.

Fight for the Dannenröder forest

The planned section of the A49 leads from Stadtallendorf to Gemünden (Felda). Around 64 hectares of forest are to be cleared for this purpose, 27 hectares of which in the Dannenröder forest. The forest is privately owned and, according to Hubertus Bieneck, the operations manager of the Schenck zu Schweinsberg forest owners’ association, is around 1000 hectares in size.

Environmental and climate protectors consider the motorway project to be outdated because it stands in the way of a traffic turnaround. The proponents, on the other hand, hope for less traffic noise in the surrounding villages, shorter distances for commuters and a more direct connection to the road network for companies.

*The article has been translated based on the content of Source link by https://www.bild.de/regional/frankfurt/frankfurt-aktuell/autobahn-wegen-aktivisten-gesperrt-schon-wieder-abseil-aktion-an-der-a3-73594970.bild.html
. If there is any problem regarding the content, copyright, please leave a report below the article. We will try to process as quickly as possible to protect the rights of the author. Thank you very much!

These were the details of the news Shortly after a serious accident: Abseiling actions on A3, A5 and... for this day. We hope that we have succeeded by giving you the full details and information. To follow all our news, you can subscribe to the alerts system or to one of our different systems to provide you with all that is new.