Caricatures, Libya, Nagorno-Karabakh … The six issues between Emmanuel Macron and... 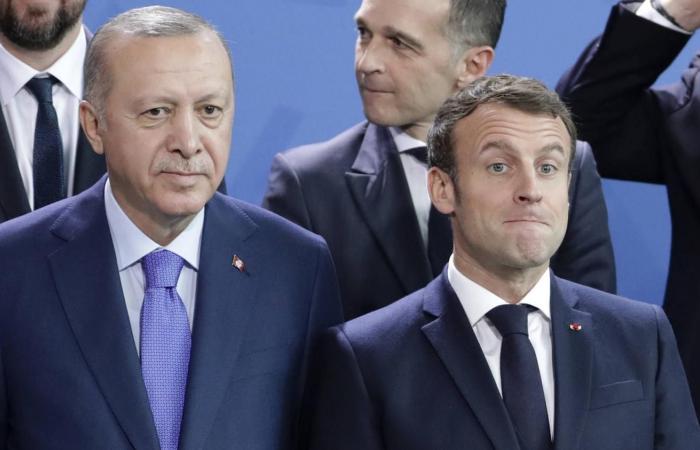 Latest episode: the attacks of the Turkish president on the “mental health” of Emmanuel Macron, in reaction to the declarations of the French president after the attack of Conflans-Sainte-Honorine.

Rarely have diplomatic relations between France and Turkey been so strained. This is evidenced by the attacks by Recep Tayyip Erdogan on the “Mental Health” by Emmanuel Macron, Saturday 24 and Sunday 25 October, in reaction to his statements after the attack in Conflans-Sainte-Honorine (Yvelines).

“We will not give up on cartoons”, had proclaimed the French president during the national tribute to the teacher Samuel Paty. Tensions in the Mediterranean with Greece to the conflict in Libya, including clashes in Nagorno-Karabakh, many issues have opposed Paris and Turkey for a year. Overview of the six main areas of tension.

The publication of the cartoons of Muhammad

During the ceremony of national homage to Samuel Paty, professor assassinated after showing a caricature of the prophet Muhammad to his students, Emmanuel Macron promised that France would not give up “to caricatures, to drawings”. “All you can say about a head of state who treats millions of members of different religious communities in this way is, ‘go get mental health exams first,’ reacted on Saturday lTurkish president. “Macron needs to be treated”, he added.

The French presidency denounced remarks “unacceptable” and recalled the French ambassador to Ankara on Sunday, a first in Franco-Turkish diplomatic relations. But Recep Tayyip Erdogan sank his neck. During a televised speech in the city of Malatya in Anatolia, he accused Emmanuel Macron of being “obsessed with Erdogan day and night”. “He is, and as a result, he really needs to be tested.”, he persisted.

The French bill on separatism

In early October, Recep Tayyip Erdogan denounced Emmanuel Macron’s statements on the need to “structuring Islam” in France, within the framework of the bill on the fight against “separatism”. “Macron’s statements that Islam is in crisis are a clear provocation, which goes beyond mere disrespect”, reacted the Turkish leader during a speech in Ankara. “Who are you to talk about structuring Islam? he hammered. It is insolence and it is crossing the line. “

This bill will be presented on December 9 and intends to strengthen republican principles in France. It has several components that are likely to strain relations with Turkey a little more, such as increased control of funding for French mosques or the ban on the training of imams abroad.

The conflict in Nagorno-Karabakh

In the Caucasus, the region of Nagorno-Karabakh, populated by Armenians, but part of Azerbaijan, proclaimed its independence in 1991, when the USSR broke up. A first conflict left 30,000 dead and hundreds of thousands displaced. Lhe situation seemed more or less stabilized, but tension has risen again since the start of 2020. And Turkey is playing an undeniable role in the resumption of clashes. Ankara, which said it was ready, from September 28, to support Baku “by all means”, is suspected of stoking the embers.

This Turkish support for Azerbaijan notably involves military support. But Turkey has also been accused of sending Syrian militiamen, which it denies. French President Emmanuel Macron called these men “jihadists” and demanded “explanations”. The Turkish authorities have proposed “four-way talks” with Russia and the two parties (Armenian and Azerbaijani separatists). A way to oust the French and Americans from the case.

Gas fields in the eastern Mediterranean

Greece and Turkey are fighting over exclusive economic zones in the eastern Mediterranean, against a backdrop of hydrocarbon exploitation. Recep Tayyip Erdogan has launched prospecting missions in areas claimed by Athens, sparking new diplomatic tensions. Already at odds with Ankara on the Libyan issue, Paris supported Cyprus and Greece in its standoff, with the sending in August of military forces to the area.

Seven leaders of southern European Union countries, including Emmanuel Macron, have raised the threat of sanctions if Ankara does not end its “unilateral activities”, with reference to natural gas exploration operations. “Do not seek quarrel with the Turkish people, do not seek quarrel with Turkey”, Recep Tayyip Erdogan said in Paris in a televised speech in Istanbul on September 12. “Mr. Macron, you are not done having trouble with me”, he added.

Libya at the heart of a pass of arms

In June, the head of French diplomacy, Jean-Yves Le Drian, condemned “growing military support” from Turkey to the Government of National Unity (GNA) of Tripoli, led by Fayez El-Sarraj, “direct violation of the United Nations embargo”. Turkey rejected these criticisms, in turn accusing Paris of “obstacle to peace” by supporting the opposing camp, represented by Marshal Khalifa Haftar.

In this already tense context, France denounced a maneuver “agressive” from Turkish frigates against one of its ships engaged in a NATO mission on June 10. According to Paris, the frigate The Courbet was trying to identify a cargo ship suspected of carrying weapons to Libya when it was illuminated three times by the Turkish escort’s fire control radar.

“These norias of boats between Turkey and Misrata [ville libyenne], sometimes accompanied by Turkish frigates, do not contribute to de-escalation “, had judged France, while accusing Turkey of violating international regulations. Emmanuel Macron said that Turkey had “increased its military presence in Libya and massively re-imported jihadist fighters from Syria”, before evoking “the historical and criminal responsibility of Turkey”in the conflict.

In an interview with the weekly The Economist in November 2019, Emmanuel Macron ruled that NATO was in a state of “brain death”. The French president deplored the lack of coordination between the United States and Europe and the unilateral behavior of Turkey in Syria. This outing had earned him a rant from the Turkish president: “I am addressing French President Emmanuel Macron from Turkey, and I will say it again to NATO: ‘Have your own brain death examined first. These statements only apply to those like you, who are in good shape. of brain death ‘. “

The Turkish Ambassador to France was immediately summoned to the Foreign Ministry to explain what Recep Tayyip Erdogan said. “Let’s be clear, this is not a statement, these are insults”, for its part reacted the French presidency.

These were the details of the news Caricatures, Libya, Nagorno-Karabakh … The six issues between Emmanuel Macron and... for this day. We hope that we have succeeded by giving you the full details and information. To follow all our news, you can subscribe to the alerts system or to one of our different systems to provide you with all that is new.