‘Cancel Borat’: Some in Kazakhstan are not amused by the continuation... 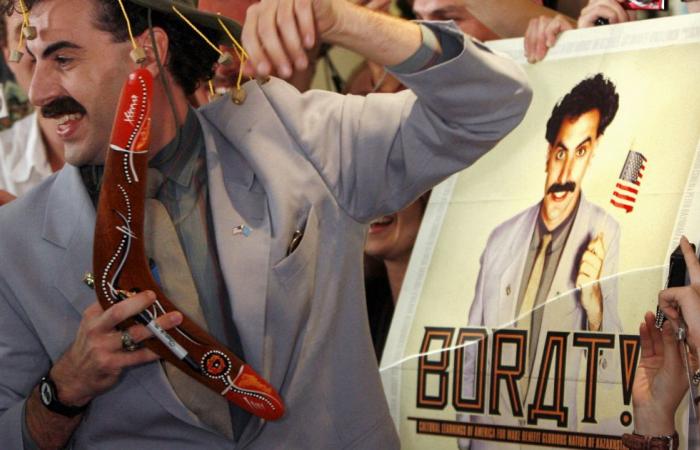 The mockumentary comedy film, directed by Jason Woliner, titled Borat Subsequent Moviefilm: Handing an Amazing Bribe to the American Regime to Support the Once Glorious Nation of Kazakhstan, was released on Amazon Prime on Friday.

The fictional title character is a Kazakh journalist and television personality Borat Sagdiyev, played by Baron Cohen, and is characterized by his exaggerated racist, anti-Semitic and misogynistic views, which are portrayed in the film as typical of Kazakhstan.

While the film is more of a satire of American ignorance and prejudice than an attempt to ridicule Kazakhs, not everyone in Kazakhstan appreciated the joke.

Before the film was released, more than 100,000 people signed an online petition to cancel the film.

On the day of the premiere, small groups of demonstrators also gathered in front of the US consulate in the Kazakh city of Almaty.

The social media response has been particularly violent. The hashtag #cancelborat appeared on Twitter and Instagram. Thousands of Kazakhs were outraged by the film’s alleged racism and accused Baron Cohen of offending the nation.

To make matters worse, the film’s marketing team set up fake Instagram and Twitter accounts pretending to be the Kazakh government before the premiere. Initially, most of the tweets focused on the weather and the activities of the country’s ministers.

Little known fact: Kazakhs were the first in the world to domesticate horses. Another great moment in the history of our great nation! #technology #worldculture, “said a tweet on September 30th.

On the same day, the parody account tweeted to congratulate Donald Trump – the “great friend of the Kazakh people” – on winning the presidential debate before it even took place.

“Excuse me. We can’t follow the debate right now as the WiFi signal is poor, despite the recent government purchase of a broadband account. Please inform us about developments! # debates2020, ”said a subsequent tweet.

While the Kazakh Prime Minister’s press office felt obliged to deny the author of the report, this time the authorities held back from making official comments on the film.

“Borat the last thing to worry about”

But in 2012, Foreign Minister Yerzhan Kazykhanov said he was “grateful to Borat for helping to attract tourists to Kazakhstan”.

After the film was released, the number of visas issued by the country increased tenfold.

“Borat has again divided the Kazakhstan people into two camps. Some people are deeply outraged and say the film is a lie because it was shot in Romania and not Kazakhstan. Our country is only 30 years old and the state symbols are still sacralized, ”Tatiana Fominova, a Kazakh marketing specialist, told Al Jazeera.

“The other half understand that the film is mostly about the United States and Sacha Baron Cohen chose Kazakhstan almost at random,” she said.

Fominova noted that foreigners often laugh at Kazakhstan because of Borat, believing that the film reflects reality.

She said she encountered this reaction herself while visiting the US, which she felt was uncomfortable, but added that she would not withhold it from the filmmakers.

“The level of absurdity and corruption in our country is so high that Borat is the last thing to worry about,” said Fominova.

“Kazakhstan has only attracted the world’s media attention in the context of successive political and social scandals. Borate cannot spoil this picture any more. ”

These were the details of the news ‘Cancel Borat’: Some in Kazakhstan are not amused by the continuation... for this day. We hope that we have succeeded by giving you the full details and information. To follow all our news, you can subscribe to the alerts system or to one of our different systems to provide you with all that is new.