Coronavirus – Demonstrates: – No more deadly than the flu 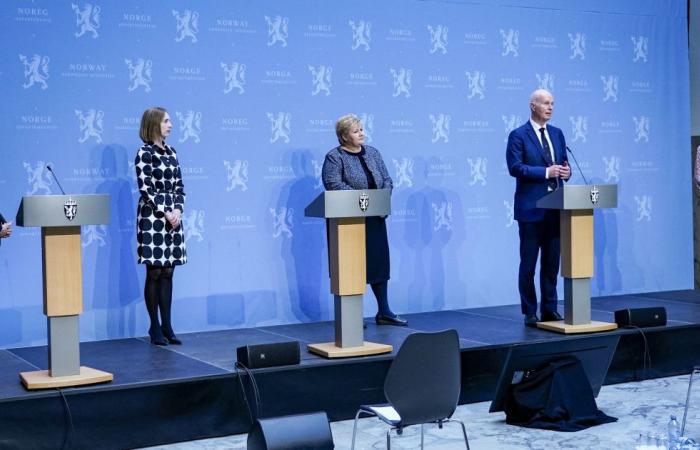 Sunday at 14 a demonstration has been announced against the country’s coronary restrictions outside the Storting.

The demonstration is called “Demonstration against the government’s handling of covid-19”.

The event is divided into several different groups on social media. Their message about the pandemic varies, but what they have in common is that they believe the authorities’ measures against the spread of the coronavirus are too strict.

On Saturday night, just over 250 have announced that they will participate in the demonstration, while just over 760 have ticked off because they are interested.

In other countries, similar demonstrations have gathered tens of thousands of participants, including in London and Berlin.

Demonstrate against the measures

The man who is the organizer of the demonstration, Nader Eide, refers to the information on the event’s Facebook page on Dagbladet’s questions about the background for the demonstration being held.

It says the following:

To Dagbladet, Eide adds the following comment about today’s demonstration:

– It is a protest against the measures. We think they are too strict and that they are unnecessary. They are not in proportion to the danger posed by the virus.

– How many do you expect to attend the demonstration?

– We may expect around a thousand, but we hope for several thousand.

– Do you think the pandemic is a hoax?

– I am not saying that there is no virus, but that this virus is no more deadly than the flu. In this way, I think the pandemic is a hoax. Mortality does not justify the measures that have been implemented.

In its risk assessment from 09 October, FHI writes that the risk of dying from covid-19 infection is estimated at 0.31 per cent. This means that three people are assumed to die per 1,000 people infected with the coronavirus in Norway.

The director of the Norwegian Institute of Public Health Camilla Stoltenberg told VG the same day that this figure is three times higher than the corresponding uncertain estimate for the flu, and points out that the number of deaths during the flu season 2017/2018 was estimated at 1400 people in Norway.

– What kind of background do you have? Are you educated in medicine?

– What kind of background I have is completely irrelevant. I do not need to be a doctor to understand what I read, says Eide to Dagbladet.

The activist does not want to go into his personal opinion about the pandemic of Dagbladet.

– Why have you posted on social media where you say that the pandemic is a bluff, and that face masks do not work?

– It’s quite simple. If you look at what the masks were made for, what the purpose was, and the composition of the masks. Then you will see that masks do not work. They are designed to stop bacterial infection – not viruses. Bacteria are quite many times larger than viruses, Eide replied then.

Actual. no further writes that Eide did not want him to answer why he has called the pandemic a bluff and a planned pandemic. He must have pointed out that others would then just call it conspiracy theories.

Several Norwegian doctors have signed a petition calling for the free spread of the coronavirus among young healthy people.

More than 500,000 people have signed the petition. Among them are 28,400 doctors and 10,300 medical and public health researchers. Doctor and radiologist Per Mathisen at Sørlandet Hospital, former editor Charlotte Haug in the Journal of the Norwegian Medical Association and former municipal chief physician Dagfinn Haarr in Kristiansand municipality are among those who have signed.

Similar demonstrations that will take place in Oslo on Sunday, have been held in a number of cities in recent months.

A similar demonstration was held in London on Saturday. Several thousand people gathered to protest against the British government’s measures to curb the coronavirus.

The protesters started in Hyde Park and marched to Trafalgar Square, where police disrupted the march as a result of violations of infection control regulations.

According to The Guardian, at least three people were arrested.

The protesters carried placards demanding the end of the bandage and called the authorities’ measures tyranny and surveillance. Some called the whole pandemic an invention, reports NTB.

Several similar demonstrations have been held in Berlin.

During the demonstration on August 29, several of the participants appeared with American, Russian and German flags, while others wore T-shirts marked with “Q” – the symbol of the movement Querdenken 711, which has its origins in Stuttgart, writes NTB.

During a similar demonstration four weeks earlier, it was reported that there were neo-Nazis, people from the far right, far left, vaccine opponents and those who believe the corona pandemic is a conspiracy, among the participants in the German capital, according to NTB.

Commented on the criticism

During a press conference earlier this week, Minister of Health Bent Høie commented on the opposition to the measures and called for the “Great Barrington Declaration”.

He stressed that he welcomed the debate on the strategy, but at the same time warned about the strategy of letting the virus spread freely.

– The virus is as dangerous as before. The number of hospital admissions is increasing in many countries. The infection has moved from the young to the elderly. City after city introduces curfew. Country after country declares health crisis. We are not there, and I hope we do not get there, was among what Høie said during the press conference.

– Releasing the virus and at the same time protecting the risk group would be demanding. The risk of not succeeding would be too great, he added.

These were the details of the news Coronavirus – Demonstrates: – No more deadly than the flu for this day. We hope that we have succeeded by giving you the full details and information. To follow all our news, you can subscribe to the alerts system or to one of our different systems to provide you with all that is new.