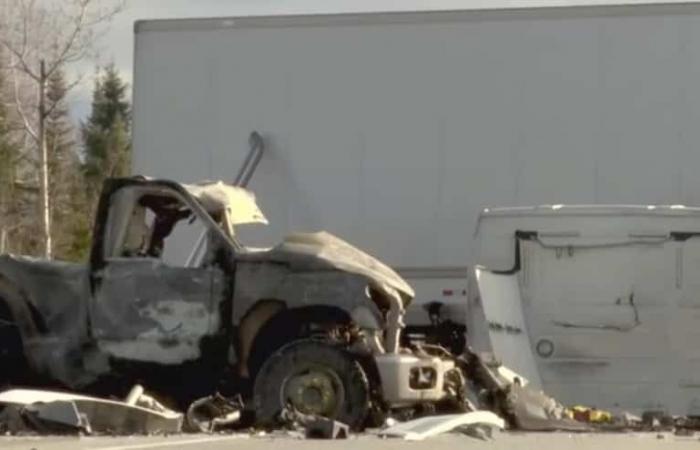 Two men died after a violent head-on collision between a van and a heavy truck on Saturday morning in Val-d’Or, Abitibi-Témiscamingue. A third vehicle was involved in the accident.

At around 5 a.m., on the Thompson Bridge of Route 117, the driver of the van, a man in his thirties, strayed from his lane for a reason still unknown, according to the Sûreté du Québec (SQ).

It was then that he hit a heavyweight that was rolling in the opposite direction head on. Due to the brutal shock, the van caught fire, and the driver was unable to exit in time. His body remained trapped in the vehicle even after the fire was extinguished.

The driver of the heavy truck, a man in his fifties, was taken to a hospital in serious condition. He was pronounced dead later that day.

On impact, a third vehicle struck the rear of the truck. The driver, however, was not injured and was not taken to a hospital.

Police officers in collision investigation were on site to try to reconstruct the course of events.

These were the details of the news Val-d’Or: two dead after a head-on collision for this day. We hope that we have succeeded by giving you the full details and information. To follow all our news, you can subscribe to the alerts system or to one of our different systems to provide you with all that is new.