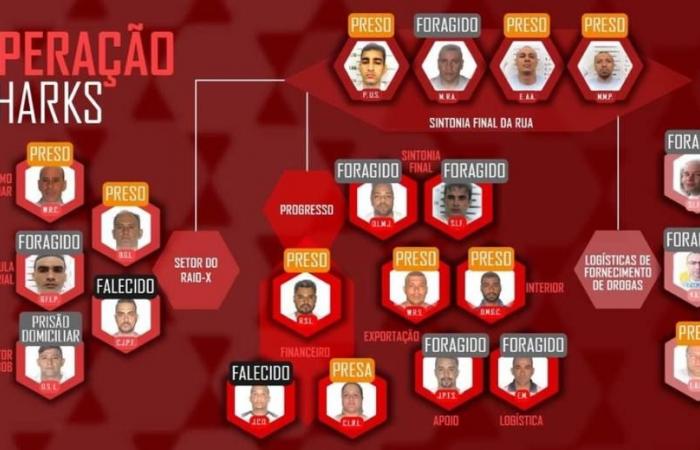 SÃO PAULO – O First Command of the Capital (PCC) moved R $ 1.2 billion as international drug trafficking per year – the amount does not include private business done by its members and associates. The data are contained in the documents seized in Operation Sharks, which investigated money laundering money of the faction between June 2018 and September 2020.

The Justice of São Paulo decreed this Friday, 23, the arrest of 18 accused of belonging to the Dome the structure of drug trafficking and money laundering and of commanding the actions of the criminal organization on the streets. “I believe this will be the first phase of the PCC’s Lava Jato,” said prosecutor Lincoln Gakiya, one of six who signed the complaint against the group.

Among those accused by the State Public Ministry (MPE) are Marcelo Moreira Prado, the Unintentionally; Eduardo Aparecido de Almeida, the Pisca; and Marcos Roberto de Almeida, Tuta. The latter remains free and is appointed as the current head of the faction on the streets.

Only part of the money detected by the promoters was moved in the financial system – about R $ 200 million – through bank accounts in the names of oranges and ghost companies. The rest were kept in safe houses and transported in cars until they were handed over to money changers, who remitted funds abroad in order for the faction to pay their drug suppliers in the Paraguay, on Bolivia and no Peru.

This is the first time that the MPE approaches the decision to qualify the PCC as a mafia-type organization, as it clarifies the group’s money laundering schemes, the last step for the group to be considered a mafia. “We show that the PCC’s money is not in Brazil. He’s going abroad, ”said prosecutor Gakiya.

MPE investigations began on August 8, 2018, when Robson Sampaio de Lima was arrested in São Paulo. With him, the police found cell phones, computers and drugs. There were documents from the faction’s financial sector accounting.

According to the prosecutor’s complaint, Prado, Sem Querer, would exercise control of the PCC’s financial sector. He gave orders to Lima. Both Sem Querer and Almeida, Pisca, were arrested on July 18, 2018, in Asunción, Paraguay.

The entire financial movement of the faction could only be done through orders from Sem Querer. He was the one who determined the delivery of remittances of money to the PCC money changers, informing the values ​​and to whom the money from the network of safe houses should be destined.

Vault houses were the faction’s means of dealing with the large amount of money from drug trafficking. The network was created – the treasure of the PCC – so that the group could maintain its liquidity. Homes still solved the problem of finding money laundering schemes. The investigators suspect that part of them is installed in luxury houses acquired by the group in upscale neighborhoods.

Spreadsheets were seized on Lima’s computers, showing that Sem Querer and Pisca were the two leaders of the CCP to which they were subordinate. The two were linked to Tuta, appointed as responsible for organizing the faction on the streets, taking care of the distribution of drugs. He would still be responsible for the group’s arms depots and maintain relations with Lima.

Proof of this would be messages he exchanged with Lima in which his subordinate asked for permission to remove 50 buckets of amphetamines kept at the home of a couple who rented the place for R $ 1,200.

Another defendant in the case is Odair Lopes Batista Junior. Under Tuta, he would be responsible for the so-called Progresso sector, the drug retail in the capital of São Paulo and in the Baixada Santista. In January 2019 alone, he reportedly handled – according to the seized spreadsheet – 1.85 tonnes of cocaine. In February, that number was slightly below: 1.73 ton. Another 2.8 tons were brought between March and July.

In all, the PCC handled in the first half of 2019 – including all schemes – 15 tons of cocaine, which were transported from abroad to São Paulo and Baixada Santista. The faction also started selling amphetamines, as well as cocaine and marijuana.

To distribute the drugs and money, the faction set up a network of cell phones that only communicated with each other. None of its members could maintain contact with other people on their phones. When the phone of one of them was seized by military police officers who did not know they were in front of one of the guardians of a faction stronghold, the leadership ordered Lima to redo the entire cell phone network of the group, replacing the used devices. In a single occasion, the faction bought 28 devices for R $ 63.4 thousand for the chiefs. And he used another R $ 341 thousand to buy phones and chips for other members of the financial sector.

Who was responsible for setting up the network, according to the MPE, was Carla Ruy Riciotti Lima. It was she who recorded on the devices the applications that should be used and the contacts that each one should have to safeguard the security of the top of the faction. Hundreds of chips were seized with her while searching her home on September 14 this year, when the accused was arrested.

Its chief, Robson Lima, was also appointed by the MPE as responsible for paying bribes to corrupt police officers and the group’s travel expenses. In their spreadsheets there are details even of how much was spent to “wrap the wire”, as the faction calls the purchase of a plastic roll to pack cash. There are still purchases of chips for cell phones and even the payment of IPVA for used cars to transport the money, as the faction would not want to lose a loaded car because of tax arrears.

In PCC documents, money changers are identified by codenames. Among them is the “Veia”. For example, she received $ 626,000 of the $ 900,000 traded by one of the faction’s traffickers in an operation described in the seized spreadsheets and cell phone messages. In them, the dollar amounts are described as “in green” as opposed to the one delivered to dollar makers in “real”.

The PCC’s scheme was affected by the Federal Police’s Operation Câmbio Desligo in May 2018, which investigated among others the money changer Dario Messer. After the action, faction member Robson Sampaio de Lima was unsure about how to continue remitting money abroad. The transportation of money was always fractional. The maximum limit per trip was R $ 250 thousand.

The group went on to discuss instituting the scheme of transporting money through people called ants or mules with bags, due to the need for many daily trips. We opted to hire drivers with no criminal record to do the transportation.

The same system of fractioning money for transportation was used when trying to move funds into orange bank accounts. “The boys hired to take money to bank branches made fractional deposits and at different agencies,” says the prosecution’s complaint.

The group invested the money in the purchase of cars, real estate and in the maintenance and purchase of aircraft. Just for renting a garage, buying fuel and paying pilots and mechanics, the faction spent $ 990,000 from June 2018 to July 2019. The prosecution found notes about the presence of PCC members in Bulgaria, Germany, Spain, Angola and Argentina. Of defendants in Operation Sharks, 8 are at large.

These were the details of the news PCC moved R $ 1.2 billion with drug trafficking; Justice... for this day. We hope that we have succeeded by giving you the full details and information. To follow all our news, you can subscribe to the alerts system or to one of our different systems to provide you with all that is new.